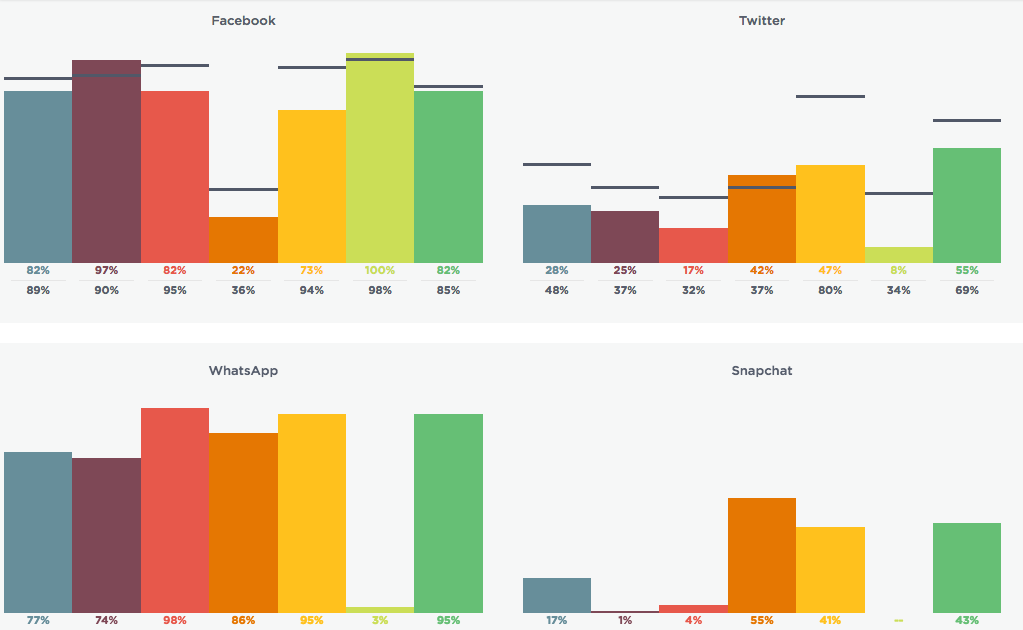 A new study by Northwestern University in Qatar, in partnership with Doha Film Institute, highlights the shifting media use trends in the Middle East.

In the Middle East, Twitter and Facebook are losing ground amid privacy concerns, internet users are increasingly watching films online (as long as they’re free), and more people say they’re concerned about online surveillance by corporations than about snooping by the government.

Those are among the key findings of the 2016 Media Use in the Middle East study, a six-nation survey released this month by Northwestern University in Qatar, in partnership with Doha Film Institute. The study, which has been conducted annually since 2013, offers a detailed picture of how media use trends are evolving in Egypt, Lebanon, Qatar, Saudi Arabia, Tunisia and the United Arab Emirates.

"Arab consumers have a healthier and reasonable fear of corporate surveillance, more so than people in the West." -Everette Dennis

One key finding is that Twitter use has dropped significantly among Arab nationals in five of the six countries since 2014, while Facebook’s popularity has dropped in four countries. Everette Dennis, dean of Northwestern University in Qatar, attributes this trend in part to privacy concerns, as well as to the popularity of new social media platforms such as Snapchat and WhatsApp.

“In the study, seven of 10 Arab nationals say they have changed the way they use social media because of privacy concerns,” Dennis wrote in response to questions from MediaShift. “It appears that platforms with a public and lasting footprint will be worrisome, [which helps explain] the preference for WhatsApp and Snapchat.”

Among the study’s other notable findings are:

The full report, including an interactive data set, is online here. The following Q&A with Dennis has been edited for clarity and brevity.

The report addresses social media use, attitudes toward censorship, online media consumptions habits and other trends.

MediaShift: More people in all six countries are concerned about surveillance by companies than surveillance by governments — the opposite of what I think you’d find in the U.S. How would you explain that difference?

Dennis: One explanation is that that Arab consumers have a healthier and reasonable fear of corporate surveillance, more so than people in the West, who are only too willing to disclose their personal data for all kinds of online transactions. Media consumers in the United States have a longer history of surrendering their private information to online businesses and organizations. However, many people in the Arab region, and a perhaps surprising number of people in the wealthy Arab Gulf, do not even have credit or debit cards, and neither trust nor are interested in online transactions. Meanwhile, government surveillance has had a high profile in the West in light of WikiLeaks, Edward Snowden and other instances.

This year’s study actually found substantially greater concern about corporate surveillance than in past years. What factors might be driving that trend?

Dennis: As people in the Arab region become more digitally connected, consumers are bombarded by spam, unsolicited requests for information and unwanted ads to a greater degree than ever before. In Qatar, the government has stepped in to limit unabashed spam texts from the country’s two telecom companies, due to both annoyance and privacy concerns. There have been other publicized cases of identity theft, almost all from data collected by business entities. There have also been instances in the Arab world where the vulnerability of major financial institutions and their inability to avoid hacking parallels that in the West. And recently, data from thousands of customers of Qatar National Bank were exposed in a brazen hacking episode, although this occurred after NU-Q’s data collection for the 2016 study.

A majority of nationals in all six countries responded that they want to see more entertainment media based on their own culture and history. What do you make of that? Do you interpret it as pushback against Western cultural imperialism?

Dennis: We can speculate that it’s related to what some call the re-traditionalization of the Arab World where interest in local culture and traditions is high. Another study we released last month offered compelling evidence of the impressive growth of local media outlets and content as well as their ability to compete for attention. To be sure, Western content still has a wide reach, but people in the region are often offended by content that demeans their culture or is otherwise seen as insensitive.  So-called romantic/sexually suggestive content or anything deemed potentially harmful to children is a turnoff for these audiences. And not surprisingly, there is little tolerance for content of any kind that criticizes their religion. Old assumptions about Western cultural imperialism seem less relevant now.  Still, the most compelling factor seems to be the growth of regional entertainment options—such as Arab language feature films, scripted TV series, expanded terrestrial TV options and online streaming.

The study found that attitudes toward censorship differ quite dramatically across the six countries. How would you explain those differences?

Dennis: This is a good indication that Arabs are not homogeneous people — and there are substantial differences from country to country.  For example, respondents in Lebanon and Tunisia say that avoiding objectionable content ought to be up to the individual, a matter of free choice — take it or leave it. Respondents in other countries want the government to block such content, which reflects the overt and subtle differences in cultural norms between North Africa and the Levant, compared with the Gulf region.

What finding from this year’s survey most surprised you?

Dennis: That would be the persistent popularity of traditional TV viewing, something uncommon in much of the rest of the world these days. While it is true that TV viewing is declining, it is still quite robust compared with trends outside the Middle East.  This is especially surprising in Arab Gulf countries that have high internet penetration and mobile broadband access. Respondents in all five countries, except Qatar, still tend to watch TV at the time it is broadcast, rather than on-demand. TV viewing is a communal activity and shows resilience in the very family and community-oriented Arab region. TV is the most common way respondents say they listen to music, as having music videos play in the background at family or social gatherings in Arab countries is a common setting.

Are there other particular takeaways from the report that you’d like to highlight?

Dennis: It is clear that digital connectivity is on the rise, but not yet at the expense of traditional television viewing. It is also notable that while young Arabs are more likely to watch U.S. films than older respondents, there are also more likely to watch Arab films. They’re doing both, not sacrificing Arab cinema for Hollywood.

Unlike the West, where pay-per-view and other efforts to monetize digital content are succeeding, Arabs are using more online content, but very few are willing to pay for it. This could provide a challenge for online streaming services in the Arab region.

We also detected a clear moral streak in the respondents in several countries where they say local content is more likely to be morally sound than that produced by outside sources. Another interesting finding: More Egyptians than any other nationals say governments, not individuals, bear the responsibility of blocking objectionable content.  Especially notable since Egypt is by far the Arab region’s largest producer of entertainment media.

One thing we always stress is that survey research is only one way of knowing, though a compelling one, or course. It only goes so far with explanations, and that’s why we urge our colleagues and other who are interested to use qualitative methods to dig deeper into some of our findings.