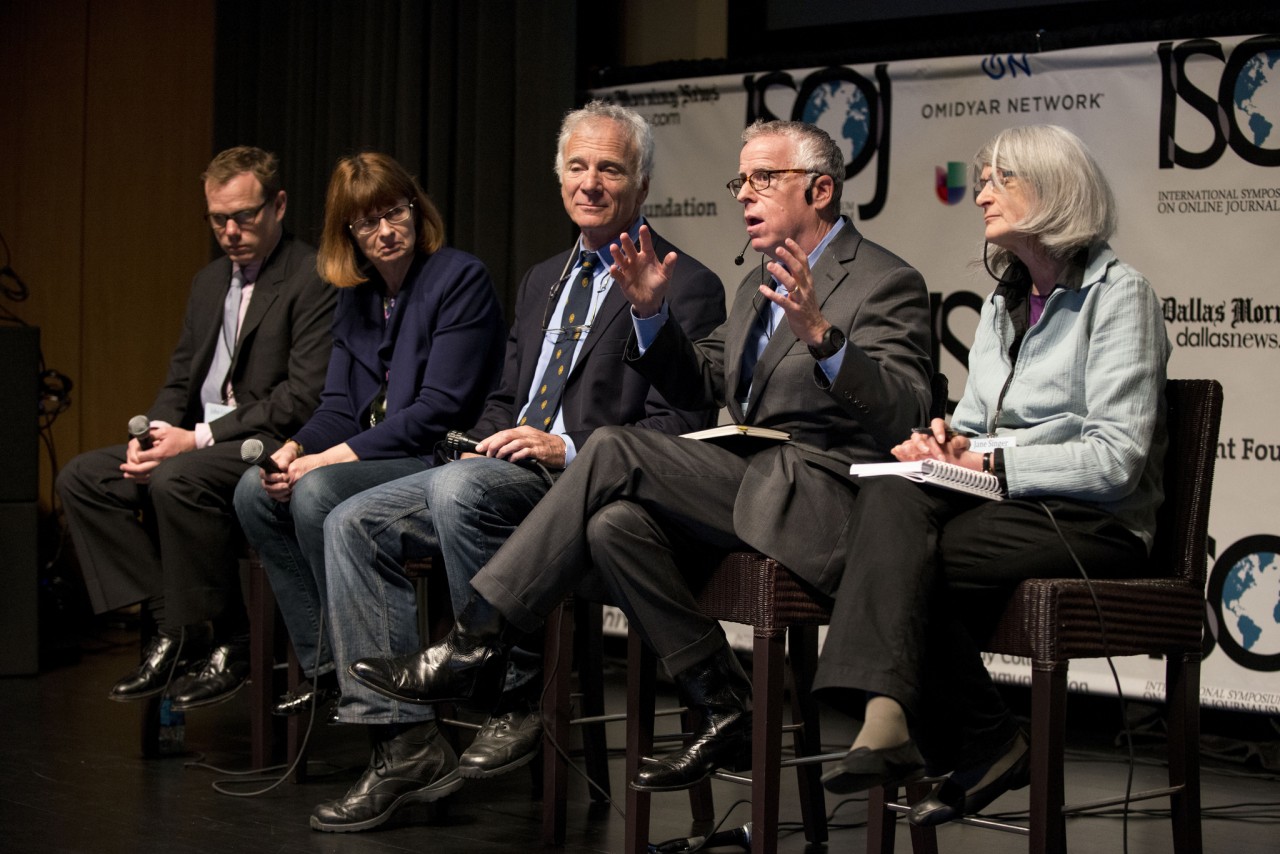 A new report co-authored by Tom Rosenstiel (second from right), executive director of the American Press Instititute and co-author of The Elements of Journalism, tackles the ethics of nonprofit journalism funding. Photo by UT Knight Center on Flickr and used here with Creative Commons license.

Amid declining advertising revenue and an uncertain business model for news online, a growing number of news organizations are turning to foundation grants and private gifts to help fund their journalism.

The problem, according to a detailed new report by the American Press Institute, is that very few industry-wide norms or guidelines exist for accepting such funding, leaving news organizations exposed to the perception — or even the reality — of ethical misconduct.

“If there are no rules, then bad things can happen. You’re leaving everything up to the good intentions and the good character of the people involved.”

“If there are no rules, then bad things can happen,” said Tom Rosenstiel, executive director of the American Press Institute and co-author of the report. “You’re then leaving everything up to the good intentions and the good character of the people involved.”

According to the research team’s survey, 99 percent of media outlets that accept nonprofit funding disclose their funders, but other measures to ensure editorial independence have been adopted far less consistently. For example, only 37 percent of nonprofit media outlets have written guidelines about funding, and even fewer (35 percent) have written guidelines on editorial independence.

Foundations are increasing their support for journalism, according to a new report by the American Press Institute.

This laissez-faire approach has left the door open for several funding practices that arguably deserve closer scrutiny. According to the survey, 59 percent of media outlets have accepted underwriting for specific stories or projects, for example, and 52 percent have accepted grants on issues where the funders do policy work. Meanwhile, 4 percent of nonprofit media outlets have agreed to show content to funders before publication.

Rosenstiel and his co-authors chose not to list specific policy prescriptions, instead approaching the report as a first step toward reform.

“You do this kind of research so that you’re not trying to make policies out of nothing,” he said. “This research was done to identify practices that might be vulnerable to abuse.”

To this point, journalism has avoided a full-blown scandal in the realm of nonprofit funding, but the report points out some canaries in the coal mine. In 2014, for example, the public broadcasting station WNET returned a $3.5 million documentary grant because of the donor’s connection to the project’s subject matter, and last year, the nonprofit investigative site The Lens lost its rent-free office space at Loyola University not long after publishing a story critical of the university’s president — a series of events interpreted by some as retribution.

In the wake of these warning signs, Rosenstiel says journalists shouldn’t wait for a crisis to strike before starting to think more critically about their funding guidelines. “If you see things in the soil that will kill the plant,” he said, “you should fix the soil before the plants die.”

The Limitations of the Editorial ‘Firewall’

But in an age when online journalism startups often begin as two- or three-person operations, Rosenstiel says the notion of the editorial firewall is becoming untenable.

“This new environment is a bit more like the days of a colonial press, where the editor was also the publisher and the printer and the writer and the receptionist,” he said. “Many news organizations just aren’t large enough to suggest, as the Chicago Tribune once did, that there would be a separate bank of elevators for the advertising staff and the news staff.”

At lean news startups, executive directors and editors are often forced to pivot between raising money and practicing journalism. The challenge, Rosenstiel says, is to figure out how to balance these functions in a way that protects editorial independence and retains public trust.

“I think it has to be an intellectual independence, rather than a notion that ‘because Joe’s in charge of editorial, he couldn’t possibly talk to [donors],’” he said. “It’s really more about understanding the importance, on both sides, of why the funders shouldn’t have their hands on the journalism.”

But making that case for editorial independence isn’t necessarily a slam dunk these days — not in an age when advocacy organizations can choose to produce journalism themselves, instead of funding that work at separate news organizations. The American Civil Liberties Union (ACLU) of Michigan, for example, added investigative reporter Curt Guyette to its staff in 2013, and last year Guyette’s research and reporting helped expose the story of Flint, Michigan’s lead-poisoned water crisis.

Guyette’s work is evidence of a blurring line between journalism and advocacy, but Rosenstiel says there are good reasons to keep the two separate — for the sake of both substance and perception.

“Facts always exist in context, and it matters how one interprets the facts,” he said. “People who work in journalism know that journalists have what I call the cold eye. They don’t start out with a predetermined conclusion. They follow the facts, and they let the chip falls where they may.”

And while a journalist’s interpretation of the facts might not always align with an advocacy organization’s ideology, Rosenstiel says that’s the price of producing journalism that people can trust. “The public needs some reliance that what they’re hearing is true and that the facts are being presented fairly. One way of protecting that is independence.”

The API report also addressed a concern that’s relatively new to journalism: dark money. According to the report, nearly half of nonprofit media outlets have received support from so-called “donor-advised funds,” in which the individual donors are not disclosed.

Rosenstiel says that dark money’s net impact on editorial independence is still unclear. On the one hand, accepting money from anonymous sources seems to contradict the widely accepted ethic of transparency. But there’s a flip side, Rosenstiel says.

“Some very thoughtful people in nonprofit media say, “If I don’t know who these people are, how can they possibly influence me,” he said. The argument is that “they couldn’t possibly be tipping the scale, because they’re completely anonymous.”

The reality, of course, is that a donor’s identity isn’t the only possible tip-off to their ideological bent. For example, if a news organization receives donor-advised funds from, say, the Sierra Club, it’s not difficult to deduce what kind of coverage they’re hoping to support.

Rosenstiel says dealing with dark money responsibly still boils down to maintaining independence from the grant organization. “I think there’s a way to manage [donor-advised funds], but the devil here is in the details,” he said. “Again, how much journalistic independence do you insist on? It matters how you do it.”