The Tylt’s Presentation is Flashy, But Its Approach to Engagement Misses the Mark 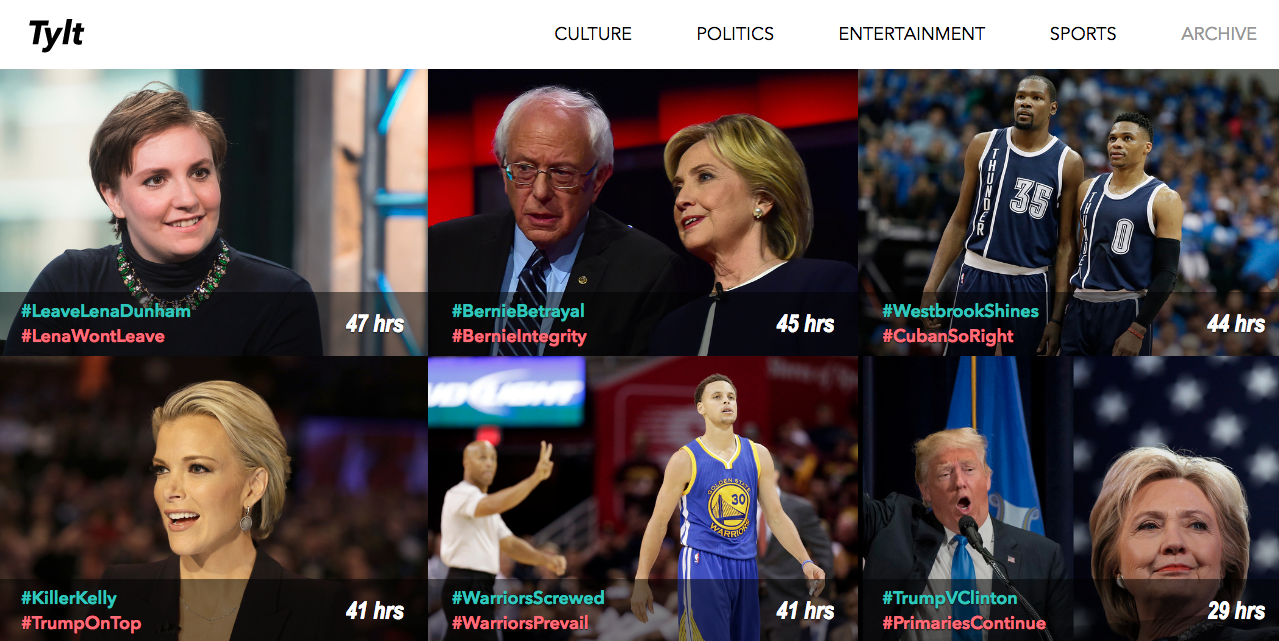 When Alpha Group, Advance Digital’s new in-house media incubator, began conceptualizing its first product, the team hoped to solve a problem: “It’s really difficult to have interesting debates online,” said Michael Donoghue, vice president for Advance Digital and founder of the Alpha Group. “There are very few places where passionate, engaged readers can really feel as though their opinion counts in any meaningful way.”

The Tylt, launched in beta earlier this month, uses social media hashtags to pose questions about hot-button issues in the news, such as whether Steph Curry’s injury means the Golden State Warriors are screwed (#WarriorsScrewed versus #WarriorsPrevail) or whether it’s too soon for the news media to speculate about Prince’s death (#RespectPrince versus #TruthAboutPrince). Posts featuring those hashtags count as votes, and the results are tracked live on The Tylt’s website — an approach to audience engagement that Donoghue says is an improvement over online comments.

“Comments sections don’t do a good job quantifying the way people feel about a topic,” he said. “People may argue, people may troll one another, people may agree with the overarching narrative of the story or other commenters, but those contributions just ripple off into the ether. Nothing is quantified.”

Donoghue is right about the problem: Audiences increasingly want journalism to be a conversation, and news organizations must find ways to enrich that conversation with voices other than their own.

But if community participation is the problem, The Tylt isn’t looking like the answer. In fact, its approach of framing debates as X versus Y is a big step backward, and its Twitter bio catchphrase — “Be heard” — is beginning to seem like a false promise, mainly because no one is listening. After two weeks, The Tylt’s Twitter account still has fewer than 150 followers, and many of its posts have zero retweets.

A screenshot from The Tylt’s website showing live poll results.

To be fair, The Tylt is still in its infancy (“This was a very soft launch,” Donoghue said), and there’s room to grow. But even if The Tylt does garner a respectable following on social media, there are even bigger concerns that the Alpha Group will need to address.

The Tylt’s biggest problem is that, by presenting audiences with a simplistic choice between option X and option Y, there’s no space for any real debate. A dichotomous issue framing might work well enough when you’re weighing the post-retirement fate of Kobe’s sneaker line, but it becomes shallow and vacuous when the conversation turns to, say, military action in Syria.

Donoghue acknowledges that some of The Tylt’s subject areas “shouldn’t be distilled into a ‘yes’ or a ‘no’” — but his hope that audiences would use social media to add more nuanced social commentary doesn’t appear to panning out. Many hashtag threads include only one or two tweets, and as you might expect from a platform with a 140-character limit, there are few examples of rich debate.

In a recent NiemanLab article, David Cohn, senior director at Advance Digital, said he could imagine The Tylt’s issue presentations evolving into something “more than a binary.” I’d argue that such a pivot is now long overdue. And apparently I’m not alone.

@Digidave @TheTylt @NiemanLab “you can imagine this evolving down the line where there’s more than a binary” Can’t happen soon enough.

Informed Debate Requires Editorial Content — And The Tylt Has None

It’s possible to imagine The Tylt finding better success if it had launched at an established news brand with a built-in audience. In that scenario, editors could have used The Tylt’s engagement model more strategically to gauge audience opinion on important civic issues, and news articles could have directed readers to go respond on social media.

But Advance Digital chose to launch The Tylt as a stand-alone platform, and it failed to create a user experience worth coming back for. The site’s biggest flaw is that it doesn’t offer any value-added for news consumers. There are no staff writers producing insightful commentaries , for example, and no aggregators compiling the “best of the web” for each of its topics. Instead, the site spits out a steady stream of binary prompts on everything from sports to pop culture to politics — all with only a couple paragraphs of context. In effect, The Tylt has tried to invite readers into the conversation without first creating a conversation worth joining.

Donoghue says it’s “too early to say” whether The Tylt will be adopted by any Advance newspapers, but if the experiment has any chance of catching on, hitching its cart to an established brand might be its only hope.

For all its flaws, The Tylt does earn high marks for design. Its website is clean and intuitive, and the ability to display polling data in real-time is a cool feature.

And as noted above, if The Tylt were to land in the hands of The Oregonian or another Advance-owned metropolitan newspaper, its algorithms and back-end magic might easily be deployed in more thoughtful, useful ways.

Donoghue and Cohn say this is just the first iteration of The Tylt, so there’s still hope that it could become a platform where community voices really can “be heard.” But after two weeks, it’s clear that the Alpha Group’s first experiment has a long way to go.