How Crowdfunding Is Empowering Communities to Tell Own Their Stories 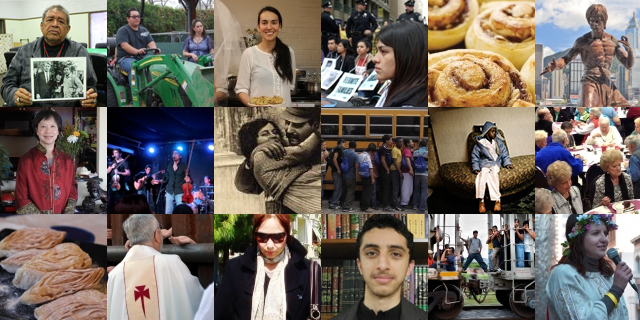 A collage of images from stories report by Global Nation at PRI. Their new campaign is working to bring new voices into public media.

I’ve been running a crowdfunding campaign with my colleagues here at Public Radio International for one month. What I’ve learned: It’s about so much more than money.

We crafted the Global Nation Reporting Fund as a challenge to ourselves: Could we get one new contributor onto PRI.org — and thus give them a step into public media — every week for a year? Could we get more people who are immersed in the communities and topics we want to cover to become the authors of the stories we tell? And could we do it in a way where this community, largely immigrants and children of immigrants themselves, are the funders as well?

From the beginning, this was a project led by a group of people who are interested in conversations about immigration that connect different ethnic groups and people with varied experiences. The rewards for our Kickstarter campaign come largely from members of  the Global Nation Exchange, our discussion group on Facebook. The message comes from them, too.

They are backing the campaign and using their networks to grow the fund. But they are also becoming more engaged as they realize they have power in how the national news media covers them. Since we began our Kickstarter campaign last month, the discussion group has grown from just under 1,000 members to over 1,300. We are getting more story tips and pitches than ever. The conversations in the group, this empowered community, have always been rich. Now, they are illuminating.

Global Nation began in the fall of 2012 as PRI’s The World’s commitment to immigration coverage, led by editor Monica Campbell. I was then the social editor and am now the digital editor. And I am proud of our track record: My colleague, Lisa Gardner-Springer at PRI, conducted an audit of our work. Of a random sample of 23 stories, she discovered: Of 54 sources in Global Nation stories, 81.5 percent were people of color and/or Hispanic. Among the 26 authors, half were people of color and/or Hispanic.

It’s a big contrast to the broader American media landscape. Nationally, less than 10 percent of the radio news workforce is non-white, according to the latest data from the Radio Television Digital News Association. The American Society of News Editors reports that less than 13 percent of daily-newspaper newsrooms are minorities.

For our journalism, that means we ask different questions than most of our national media. We want to know about disparities at the Oscars, but from the perspective of one of the child actors who was at the receiving end of Chris Rock’s joke about Asians. We want to explore conflict and tension, but give it the context of histories that are often left out. And we want to understand people on all sides of the immigration debate.

The upshot of all this — of empowering people at all levels of our process, from funding to reporting to discussion — is representation. One of the first members of our discussion group, Sheena Koshy, was gracious enough to tell me about her experience with Global Nation. She immigrated from Dubai one week before 9/11 and has thought deeply about what it means to be part of America. Fifteen years and many visa types later, she’s now in the queue for an interview for her US citizenship. Seeing these stories and discussions between immigrants has been transformative, she said.

Koshy told us why she backed the Global Nation Reporting Fund. (Image by Angilee Shah)

“It has made me question what makes an American,” Sheena told me. “I bring a lot of my Indian culture and the culture I grew up with in the Middle East into becoming an American. And this little community that you’ve created has really made me feel ok about doing that. I don’t think I quite understood that is was ok to have all these different sides to your personality — and that still makes you an American.”

As is so often true, though, it’s better if you just hear Sheena herself.

Angilee Shah is the digital editor for Global Nation at PRI. To contact her about this campaign or to pitch a story, you can email her at [email protected] Follow her on Twitter @angshah.