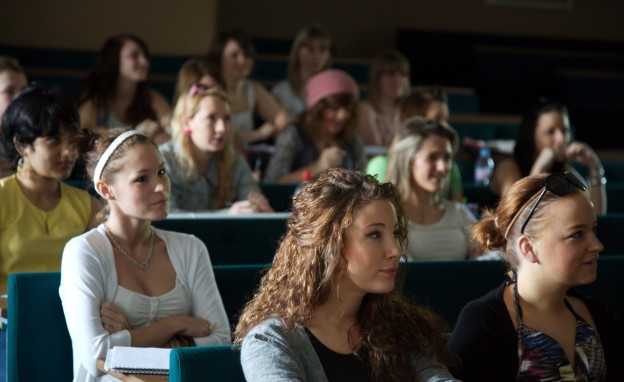 The Kopenhaver Center at Florida International University will host a livestreamed conference on gender and equity in communications professions Thursday, April 21.

Women continue to face more delays than men in gaining leadership roles in their communications careers and are often excluded completely from management positions in media fields, according to a survey of 1,258 respondents employed in media industries.

In collaboration with 14 national professional organizations, the Center conducted the survey in late 2015 and early 2016, receiving responses from a cross-cultural set of men and women across various media sectors in the U.S., including newspapers, radio, television, magazines, digital outlets, public relations and advertising.

“It’s the only time that something like this has been done with all the professions, asking them all the same questions and doing it all at the same time,” says Lillian Kopenhaver, the Center’s Founder and Executive Director, who is Dean Emeritus and Professor at FIU’s School of Journalism and Mass Communication. “We asked them all kinds of questions dealing with salary, dealing with women in leadership, and looking at leadership styles – just a whole myriad of all kinds of information.”

The conference, titled “Equity and Equality of the Sexes in Communication: Are Women Getting There?”, features a keynote address from the first female (and current) Editor-in-Chief of National Geographic Magazine, Susan Goldberg, who will speak specifically to the status of women in media.

Professionals and scholars from across the U.S. will speak on issues of inequality in communication fields during the four-hour event.

“What we learned from this survey, the most comprehensive to date of all major communication fields, will serve as an important benchmark for tracking changes in the role and status of women in communication,” says Judy VanSlyke Turk, Kopenhaver Center Research Fellow and professor emerita at Virginia Commonwealth University.

VanSlyke Turk also presented an initial report on the status of women in communication at the 2015 conference of the Association for Education in Journalism and Mass Communication.

Also to be released at the conference is a report based on footage from 13 webinars, produced since 2013 by The LLK Center, that feature female communications professionals and scholars who speak to issues related to women in media fields.

The digital white paper, “What Women Tell Women About Working in Communication,” is produced by undergraduate students selected in early 2016 as the Center’s Research Assistants and is one of two major studies released by the Center during the four-hour live-streamed conference.

“It’s exciting to have such opportunities where our young professionals can gain insights early in their careers and put their ideas to great use for the industry,” says LLK’s Kopenhaver. “Without the students’ dedication to our communication fields, the Center’s great speakers would have reached just a fraction of the audience they will reach now.”

Among the white paper’s findings based on speakers’ comments:

Those who have worked on the white paper hope to turn it into a journal article submission later this year and say their research into this project holds deep personal meaning.

Why the Projects Matter

“As I get closer to graduation and to entering the workforce, this project fueled a desire in me to combat the very obstacles the women spoke about,” says Ashley Orozco, who presented the paper’s initial findings with her colleagues at an FIU undergraduate research conference in March. “Though it’s not very surprising that women still face problems climbing up the leadership ladder, it is important to empower female students such as myself to make decisions in our field, as opposed to just working in it.”

Photo by Francisco Osorio on Flickr and used here with Creative Commons license.

“This has been a unique project,” says Erica Salkin, an assistant professor of communication studies at Whitworth, who led the student design team. “For us, it has meant looking at some strong, meaningful research and thinking about ways to package it for the broadest possible online audience. The collaboration element has been intriguing, as well. How often does a private liberal arts university in the Pacific Northwest partner with a public R1 university in Southern Florida?”

Whitworth students will attend the conference in Miami to help announce the white paper’s findings during the live-streamed panel at 4:15 p.m. ET.

“This project itself, a collaboration between two universities from opposite ends of the nation, is an ideal example of the need for a variety of perspectives within our field and strong communication between women motivated to do great work,” says Whitworth student Emily Goodell.

The Event’s Keynote: From National Geographic

The April 21 conference will also feature a keynote address from the first female and current Editor-in-Chief of National Geographic Magazine, Susan Goldberg, at 1 p.m. ET.

“This conference will be one-of-a-kind, and it’s been an honor to work with such intellectual students who each have volunteered their time to examine an important issue in our fields,” says Robert Gutsche, Jr., an assistant professor of journalism at FIU who led the Center’s student research team. “I’m looking forward to seeing how their ideas influence the experiences of today’s and tomorrow’s generations of communicators.”