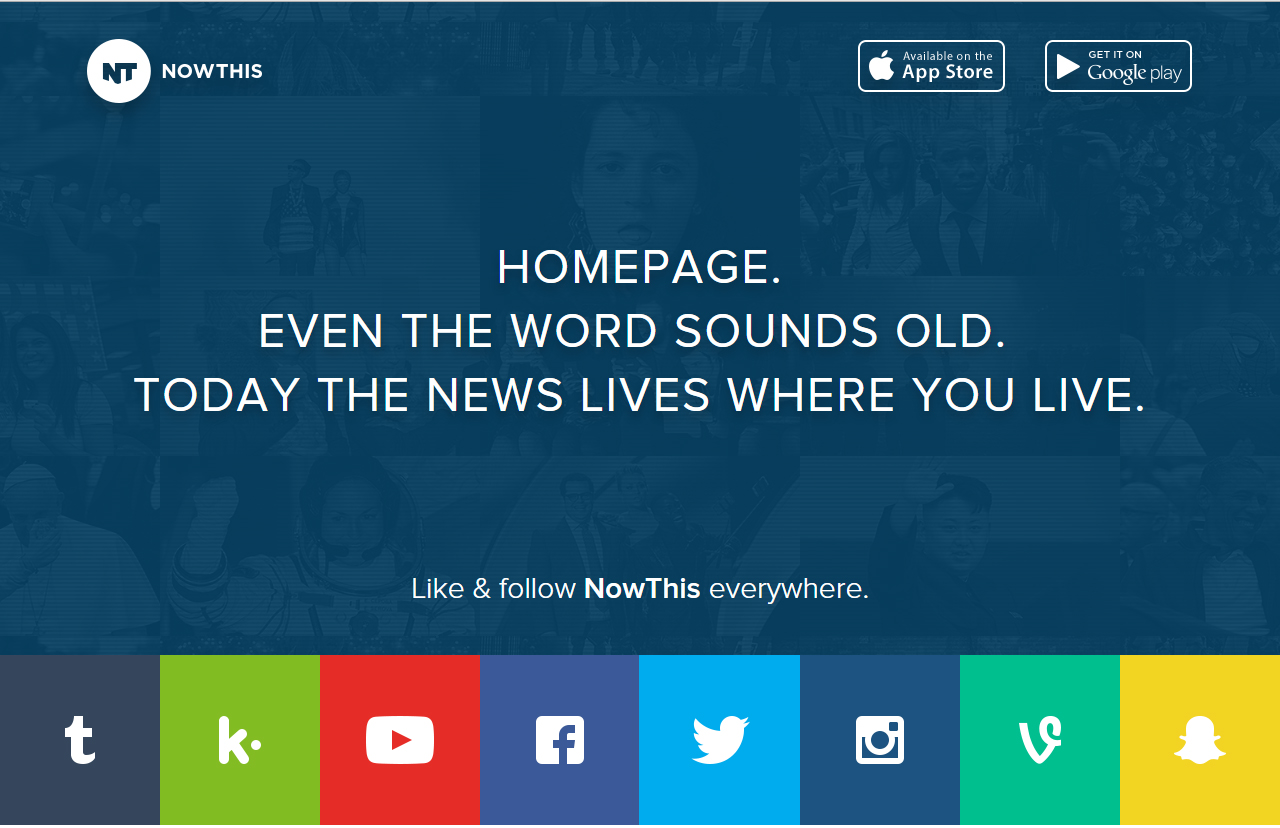 In this week’s news, Hulk Hogan takes Gawker Media to court over a sex tape, public radio station WNYC introduces sharable “audiograms” and Verifeye Media launches an iPhone app that can verify eyewitness media — and get contributors paid! Mark raves about the Amazon Echo and its Alexa intelligent personal assistant. On our first ever Metric of the Week, MediaShift’s Metrics editor Allie Kanik explains the mystery of “dark traffic.” And Mark speaks to Sarah Frank at NowThis, a video news service built for social platforms. All on this week’s MediaShift podcast!

"I don't know that the [social] platforms change as much as the people in media complain that they change" - Sarah Frank on whether NowThis is at the mercy of the platforms.

Sarah Frank is editor of NowThis, a socially-distributed media company and the #1 news video publisher on Facebook, according to Tubular. She leads a team of producers making short-form news content for every major social media platform: Facebook, Twitter, Instagram, Vine, Tumblr, Snapchat, YouTube and more. Previously, she served as head of video for New York Magazine and before that, she was a multi-media producer for Newsweek.

Hulk Hogan takes on Gawker over a sex tape

In one of the more bizarre free speech court cases, former wrestler Hulk Hogan is suing Gawker Media for $100 million over their posting of a sex tape in 2012. Hogan was caught on tape having sex with his friend’s wife, and says that Gawker’s post ruined his career. Gawker is countering that Hogan is a celebrity and has been very public about his sexual exploits, talking about them on radio shows and during his reality TV show.

But Hogan points out that his celebrity side is only as the persona of “Hulk Hogan,” which differs from his real persona as Terry Bollea, who deserves his privacy. The Florida trial started this week and Hogan took the stand to say that he was devastated when he found out about the tape. If he wins the lawsuit, he could bankrupt Gawker Media. While it’s difficult to defend publication of a sex tape, or the methods that Gawker has taken in the past, we should stand up for Gawker’s right to publish material that is newsworthy, and not erode the free press in this country.

The New York public media outlet has developed their own “audiogram” format to share audio snippets on social media in a video format. Why do audio as video? Because video seems to be the format of choice on social media, with Vine on Twitter and videos everywhere on Facebook. For a long time, radio broadcasters and podcasters have struggled to make “viral audio,” or audio clips that were shared like crazy on social media. For a long time, SoundCloud was the format of choice for sharing audio but it’s not native to social platforms.

So WNYC has been experimenting, according to reports in Nieman Lab, first using the Anchor app to preview longer audio pieces — and solicit feedback from its audience. Anchor allows anyone to record a voice comment and respond to other comments. The audio quality isn’t perfect, but WNYC might use those comments on talk shows. Meanwhile, the station has been using its new “audiograms” to promote a new podcast called “There Goes the Neighborhood,” about Brooklyn gentrification. These are the kind of wonderful tech experiments that can help keep public radio vibrant — and part of the conversation — further into the future.

There’ve been mobile apps aimed at verifying eyewitness photos and video at breaking news scenes, but a new one called Verifeye, with an E-Y-E at the end, aims to also sell footage to news outlets. The startup, co-founded by war correspondent John McHugh, just launched its Verifeye Pro Camera app, which will check the time, date, geo-location, altitude and compass bearings to verify videos or photos in the field. App users can sign up with the Verifeye agency to then have their work sold for 200 British pounds to news outlets, with the fee split 50/50 between the freelancer and Verifeye.

The agency already has signed up clients like Mashable, BuzzFeed, and the Guardian. But of course there are always ethical issues out in the field. Will the chance for a payday make freelancers take risks in a war zone? The app does allow for anonymous contributions, but a government could always come after Verifeye with court orders to get those personal details. Claire Wardle, at Eyewitness News Hub, told CJR that there’s evidence that monetizing eyewitness media has led people to cross police lines and they have to deal with graphic content without the requisite training. Verifeye is an interesting project, and worth watching, as a needed tool for freelancers, but it will have to wade through a thicket of potential issues before becoming a trustworthy source.

From the dawn of science fiction, we’ve imagined going through life telling our computers what we want. “Wake me up at 7 am.” “Make my coffee by 8 am.” “Tell me the traffic report, the weather report, the news.” “Call my husband.” And with the advent of real-life intelligent personal assistants in our smartphones, like Siri and Google Now, we’re living out our dreams. Kind of.

As most people know who use these voice-command apps, they’re far from perfect. With Siri, you have to talk slowly, unnaturally to be understood. If there’s extraneous noise, she won’t hear you properly. It gets to the point that you just throw your hands up and quit.

But over the past four months I’ve discovered an intelligent personal assistant, Alexa, that’s built into a dedicated speaker called Amazon Echo, which costs about $180. Alexa has a more natural-sounding voice than Siri, and can hear your commands much more clearly, even over loud music. You just say, “Alexa, play hip-hop,” or “Alexa, what’s the weather?” or “Alexa, play KCRW radio” and she does just that.

How did I find out about the device? My wife, Renee, told me she really wanted something called “The Cone” last Christmas. The Cone was a speaker shaped like a cone that took voice commands to play streaming music through a service called Rdio. But when Rdio went belly-up, so did the device. That’s when I heard about Amazon Echo, and ordered it for Renee as a gift.

At first, she was thrilled with it, the sound quality and the ease of use. But then she had to deal with a major bug. When she created a playlist from the Amazon Prime Music library, Alexa wasn’t recognizing it. She had to rename it, and get in touch with customer service, to try to fix it. Otherwise, it’s been pretty much what she wanted. She asks for music she likes, she plays children’s music for our 2 year old Everett, and she can skip to the songs she wants and isn’t beholden to Pandora stations any more (though it does connect to Pandora, as well as IHeartRadio and TuneIn).

Of course, once our two kids started learning how to talk to Alexa, the family battles were on. Everyone screaming at Alexa for what they wanted until… you just have to unplug it. That’s another thing. Echo is not really portable — you have to have it plugged in somewhere. However, Amazon just announced two new versions — Dot, which is portable and costs $90, and Tap, which you can connect to your existing speakers, and costs $130.

Echo relies heavily on the Amazon Prime Music library, which is pretty large, but never large enough to play everything you want. It has more trouble connecting to iTunes, which means you end up buying more music through Amazon. Of course, Echo is most tightly integrated with Amazon, making it way too simple to buy even more stuff.

There’s also the strange feeling of being in the room with the Echo, a tall black cylinder with a blue halo when it’s listening to you or talking. To me, it’s like that tall black monolith in the movie, “2001: A Space Odyssey,” an alien life force ready to be awakened at my command. But it also becomes a friend in need when you need to play “Wheels on the Bus” for the 12th time to keep Everett from screaming his head off.

I’m not the only one raving about Echo and the capabilities of Alexa. The New York Times tech columnist Farhad Manjoo recently wrote that he thinks Echo could be the Next Big Thing we’ve been searching for since the smartphone, and could represent the next $1 billion business for Amazon. Because they made it an open platform, developers are creating apps for the Echo. And once you buy one, you get constant updates with Alexa gaining more super-powers each week. Those updates make it a real living breathing piece of technology that’s always getting better.

And while we’ve come to accept Alexa into our home and our everyday lives, my cousin, also named Alexa, is more than a little upset. She would never want a machine in her house, with people yelling out her name all the time! She has to wonder why Amazon couldn’t have come up with a more obscure name.

In any case, we’ve been wowed by the Echo and what it can do — along with its future potential. Our science fiction fantasies seem to be coming true more and more these days.