How CIR Gauged the Success of News Interactives 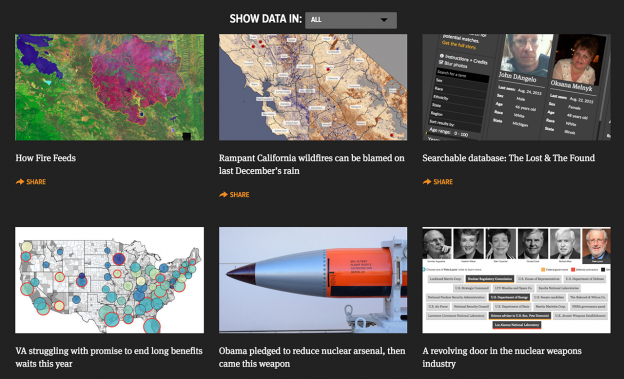 Screenshot of The Center for Investigative Reporting's data apps page.

Lindsay Green-Barber is the Director of Strategic Research at the Center for Investigative Reporting. This post was written and originally published by CIR and is republished here with permission.

As news organizations strive to take advantage of the possibilities afforded by online platforms and to meet the demands and needs of increasingly data-savvy audiences, new forms of digital storytelling abound. A news interactive is one of these new storytelling methods, intended to take complicated data and make it accessible to media consumers. However, news interactives, or apps, require significant organizational resources, and the impact of these projects on audiences remains underexplored.

“Why do we make news apps, and what makes an interactive successful?”

At the Center for Investigative Reporting, we pay careful attention to the impact of the media we create and to the calculus between the costs and benefits of assets produced on various platforms. We wanted to better understand the impact of our news interactives and to identify characteristics that contribute to an interactive’s success. While based on an analysis of CIR news applications, these findings also have implications for the field.

To begin, I asked CIR staff, “Why do we make news apps, and what makes an interactive successful?” In response, they identified three main functions of news interactives: to “dive deeper” and “explore” data, in general; to enable users to find information specifically “relevant” to one’s own life or community; and to “tell a story.”

But, in fact, do people dive deep and explore our data apps? And does this exploration carry over to deeper exploration of other elements of our stories? Or does the audience consume an application as a standalone story?

What is a news interactive, anyway?

In the Data Journalism Handbook, Scott Klein of ProPublica says a “news application is a big interactive database that tells a news story.” However, news interactives range from quick tools that illustrate simple concepts to complex data applications built upon sizable databases. For example, CIR created a simple timeline to show how “Ebay waffles on guns as debate over assault weapons continues,” while the data interactive “Do you live in one of California’s pesticide hotspots?” is based on 10 years of data from the California Department of Pesticide Regulation, including 22 million applications and 1.5 billion pounds of pesticides, and allows for deep interaction by the user.

OK, but what is a successful news interactive?

For the purpose of this research, I consider a news interactive to be successful when it is highly trafficked (many unique visitors), deeply explored (evidenced by the number of events or instances of interaction on the page), and results in a better-informed audience. Here I focus on the first two indicators of success and leave measuring a better-informed audience for a future project.

I tested the following characteristics to see how they correlate to the success of news apps:

To test how these characteristics relate to an interactive’s success, which this study defines as traffic and clicks, I analyzed 29 CIR data applications. Each characteristic was assigned an ordinal value based on a three-point rubric (Low, Moderate, Strong). Two coders analyzed each data app. Intercoder reliability was high for six independent variables:

I first determined the correlation between each of the independent variables (calculated as the average score of two coders) and the dependent variables of Web traffic (for 90 days post-publication) and average events per session. I found that Web traffic is moderately positively correlated with applications that have higher scores for “degree of interactivity,” “full package,” and “local.” Web traffic proved to be moderately negatively correlated with “load time.” An interactive that scored high in these criteria and experienced high traffic is the previously mentioned application that explores California’s pesticide hotspots.

Because CIR has gone through multiple transformations over time, I also split the data into two sets: one for data applications that were hosted on the California Watch website (2011-12) and one for apps hosted on CIR and Reveal’s websites (2013-present). “Degree of interactivity” and “full package” remained moderately correlated with Web traffic for each subset. However, “local” proved to be correlated only for CIR and Reveal application traffic.

Traffic to CIR and Reveal apps is moderately positively correlated with “design/aesthetic” and strongly negatively correlated with “load time,” while California Watch apps do not correlate with either of these variables. This suggests that users are becoming more discerning about the design of the apps they use and more accustomed to rapid load times.

This analysis supports the following hypotheses:

While these findings are specific to CIR, the implications are valuable for the industry as a whole. These findings would be strengthened if additional newsrooms applied the same methodology to analyze their news interactives and shared their findings. If other organizations found support for the hypotheses listed above, we as a community could be more confident that this is a general phenomenon.