How Can We Create Media Democracy? 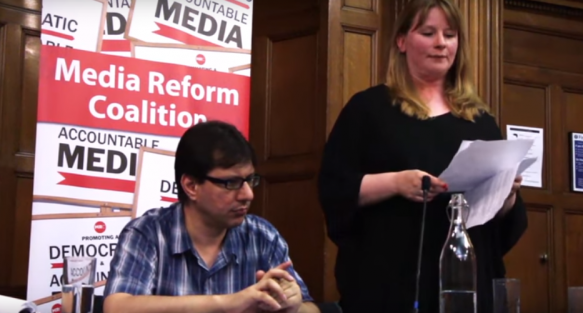 The Media Democracy Festival posed the question: How can we create a more democratic media? Screenshot from the film “The Fourth Estate."

One solution to the problem of cross-media ownership dominating an entire media landscape in Britain and across the world is incorporating a one media owner per one media outlet policy. I have continued to support this idea for media reform but it was fascinating to hear other solutions discussed at an all-day event called the Media Democracy Festival in London last month.

“The problem is independent voices are rarely heard. It is essential that we protect journalists working with big corporations – who are put under editorial pressures – if we are to reach media freedom”.

Natalie Fenton, founder of Media Reform Coalition (MRC) and -professor of media and communications made this point in her speech at the event hosted by the MRC and Goldsmiths University. Her speech was one amongst many made by campaigners, academics and journalists, all there to answer the event’s central question: How can we create a more democratic media?

"Local matters and local voices are unrepresented, which can lead to stereotypical narratives in the cultural narrative."

Ideas proposed include the incorporation of a whistle-blowing hotline and journalism scholarships for journalists from low-income families and ethnic minorities to the implemention of a “conscience clause” for journalists to work within an ethical code of practice.

Most speakers highlighted the need to challenge government policies and support independent journalism platforms in order to achieve transparency and a range of perspectives.

Citizen and independent journalism is increasingly relied upon for an alternative view, and mainstream media works hand-in-hand with the political agendas of its owners, there has never been a more crucial time forthis event or a report that takes a deeper look at media ownership in the United Kingdom. Thankfully, the MRC has done both.

Who Owns the UK Media?

With 36 million UK citizens, “some 57 percent of the total population do not have a daily newspaper that is able to dedicate itself to matters of concern to their community.”

Local matters and local voices are unrepresented, which can lead to stereotypical narratives in the cultural narrative.

This is not only damaging to the investment one has in their community but it has adverse effects on minority communities. For example, in one week over 90 percent of media stories about Muslims in Britain were negative. Since 2001, the overall picture presented by the media is that Islam is profoundly different from and a threat to the West. One solution proposed at the Media Democracy Festival: If we had a more effective press regulatory body and support for independent journalists from ethnic minorities, misrepresentation in the news can be challenged or put into proper perspective.

The same concerns can be applied to television. In Britain, the main public service channels account for nearly three quarters of all viewing, yet Sky is by far the biggest broadcaster and its share of revenue is set to increase if proposed cuts to the BBC take place.

What’s The Future of UK Media?

With Sky dominating televised broadcasting, one concern is that the line between entertainment and news reporting may become blurred; compromising the journalistic autonomy of other news channels.

It was therefore encouraging to listen to representatives of independent news channels at the Media Democracy Festival such as Vision on TV and Let Me Look TV: Passionate voices working towards a more democratic media landscape. There was also a live crowdfunding event for various media projects to pitch to the room and a couple of documentaries screened with a Q&A afterwards, including “The Fourth Estate.”

The documentary was made by filmmakers Lee Salter and Elizabeth Mizon who spent two years interviewing journalists, academics and critics on the industrial practices in the media industry brought to light after the Leveson Inquiry in 2011.

It was during the phone hacking scandal that the legality and integrity of British journalism was first brought into question, but since then the inadequacies in the media have broadened to implications and connections to ideology, entertainment and political economy at work. This film does an excellent job at examining the people and practices of the media industries.

Natasha Cox (@natashajcox) is a television and documentary producer working in London. She has produced documentaries for Channel 4, ITV and the BBC as well as contributing to the award winning film, ‘(Still) The Enemy Within’ released in 2014. Natasha co-founded the action group, ‘Art Uncut’ for artists and musicians against public spending cuts in the UK.