The Gamification of Investigative Journalism at Muck Rock 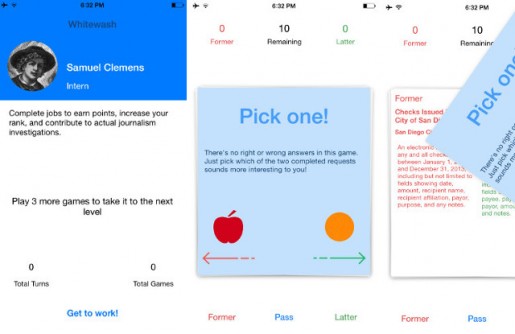 A few weeks back, Through the Cracks interviewed Michael Morisy, founder of Muck Rock, a website that allows people to crowd fund and collectively seek public records requests.

Just recently, Muck Rock began to offer the Projects service, which allows people to crowdfund the records requests to dig up information and the reporting to find answers.

"One of the things we really believe is that there needs to be a shift in how stories are told and how you engage an audience with a story, not just when it’s published but over the course of months and years that big stories take to develop." Michael Morisy

With more crowdfunding this year than any other period since the site was launched four years ago, Muck Rock and its user community (the majority of whom do not consider themselves journalists) are ambitious, and Morisy carries on other projects.

Among them, the gamification of investigative journalism.

“Think of it as Candy Crush for tracking police militarization or Flappy Bird to uncover government waste,” he said in his pitch video earlier this year to conclude his time as a John S. Knight Foundation Fellow at Stanford University.

Here’s the second part of Through the Cracks’ interview with Morisy on the game project titled Whitewash.

Through the Cracks: How do people usually respond to the idea of gamification of something that’s usually seen as a lot more serious you know investigative journalism?

Morisy: Yeah, we’ve been careful to not make it too gamey. And I think that’s part of why we’re trying to be slow about it. Gamification got a deservedly bad wrap for being kind of cheesy but the early responses we’ve had, we’ve done a lot of crowdsourcing just using Google Docs and our website, and that’s all gone really, really well. And just kind of trying to figure out how we can learn from that, how can you sort of be respectful of the subject matter while making it interesting for people interested in the subject matter to participate.

And I think there are really good natural benefits there, because if you care about policing, if you care about prison privatization, you don’t need to be like you’re the prison king to get people involved with that. They want to get involved in that for very altruistic reasons and so I think it’s just being respectful of the audience, not condescending, not cynical, but giving people real opportunities to contribute to the stories and to learn about the stories that they care about.

Through the Cracks: So there’s no like are there sounds effects?

Morisy: Haha we’re working on it. I’m super interested in multimedia, and we’ve been playing, you know, honestly we have been spending a lot of time on free to play games to try and figure out how do you hook people on an ongoing experience. Beeps and boops are probably not the best thing, but I think sound in a lot of these experiences is hugely important factor. We’re trying to be modest as we start and we’re trying to really learn from our audience and learn what works.

Through the Cracks: What’s going on with Whitewash?

Morisy: It’s been an internal project and we’re super excited to make it public. Lately the focus has been on Projects. We ‘re trying to figure out how to get the funding to invest in it. So I’m applying for a few of the grants and we’re sort of evaluating our options.

One of the things we really believe is that there needs to be a shift in how stories are told and how you engage an audience with a story, not just when it’s published but over the course of months and years that big stories take to develop. And so we’re going to keep trying to slowly build on that and hopefully get some funding that you know puts some more resources into bringing that public and find some partners who would be interested in tackling big stories with crowdsourcing.

Through the Cracks: And I know that it’s on Github or last I saw it was coming soon. Are there demos or screenshots available?

Morisy: Yeah we have some screenshots. If they’re not on Github I can add them there. It’s still very rough, we’re still working on integrating our current plan. So we went and broke down all of our day-to-day work processing and managing requests to microtasks and we’re just using it internally right now to reduce our workload – when we have downtime at the office take a few minutes working there, when I’m watching Netflix I kind of take care of some tasks in trying to get that experience really good and the data’s really reliable and then we’re going to kind of roll it out slowly from there.

I think the one thing we don’t want to do is compromise quality or accuracy. So it’s kind of a slow rollout, and again, it kind of depends on funding. If we had more money to put into it, it’d come out sooner. If not, we’re going to keep working on it as we can.

Through the Cracks: A while back we wrote a story about a British equity platform investor who launched sort of a Tinder-like feature to discover interesting crowdfunding campaigns. There’s Tinder for everything now, but from what you’ve seen are you able to imagine any parts of crowdfunding that lend themselves to interesting gamification?

Morisy: Oh, absolutely. That’s one thing we’re definitely keeping in mind. And I think I got a real kick out of what Beacon Reader did with Tinder for Beacon Reader campaigns.

There’s a lot of free-to-play games that are kind of abusive to their players, but there’s a lot that have sort of positive experiences where players who fund games like Hearthstone, for example, really like the opportunity to support something they really care about. And so we’ve joked about stuff like “Hey, buy a hat for your FOIA request on the site,” which is probably something we won’t do, but I think there’s a lot of ways to make something unique on the mobile platform.

Players who fund games like Hearthstone, for example, like the opportunity to support something they really care about.

So maybe it’s sort of “Hey, get this story out in front of 1,000 people for $1” or something like that where you kind of figure out what’s a native way that feels really good and kind of recognizes your contribution while not being an experience like “It’s been 30 seconds. Pay $5 more bucks.” And we’ve always kind of put great journalism and great user experience before everything else so our goal is to figure out a way to monetize and support creators while also being super respectful of the audience and not doing anything that we would hate as a reader.

And that’s led to…we try to avoid third party trackers on our site, we don’t have any advertising, we don’t have any paywalls, although I am super interested in what Pando and Beacon have done with clever paywalls that let you unlock articles and what would the mobile equivalent of that be?

I think it’s something a little different than what the two of them are doing right now, but I think experiments like that suggest some ideas that might translate really well to crowdfunding on mobile devices.