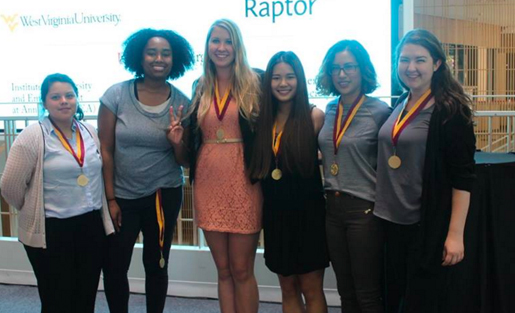 The winning team at the Hack the Gender Gap at USC. Photo by USC Annenberg.

Much has been said about the lack of voice and opportunity for women in both journalism and technology, especially when it comes to business and leadership positions. With this in mind, MediaShift and the USC Annenberg School for Journalism and Communication produced a weekend Women’s Hackathon from Oct. 9 to 11, 2015, at USC’s Wallis Annenberg Hall in Los Angeles. It was designed to both help students and practitioners develop the technological and entrepreneurial skills critical to the journalism jobs of the future, as well as to offer a place for women to share ideas and experiences — to help each other succeed.

The focus for this year’s sold-out event was immersive journalism and virtual reality (VR), with attendees breaking up into teams to create and pitch their own startup ideas around these themes. The event follows in the footsteps of last year’s successful Hack the Gender Gap Conference with the Reed College of Media at West Virginia University and panel at Google in Silicon Valley, and was made possible with support from the International Women’s Media Foundation (IWMF), WVU’s Reed College of Media and Knight-Mozilla OpenNews. The Friday panel about women in media and tech was sponsored by Raptor Group.

"Was so inspiring to see so many young women digging into technology!"

We’ve rounded up a collection of photos, coverage, feedback and a Storify highlighting the top moments on the #GenderGap hashtag on Twitter during the weekend. Did we miss anything? Let us know, and we’ll update the post.

This video produced by Alexa Ard, a student from University of Nevada-Reno, tells a great first-person narrative of the Hackathon:

We also have a video produced by Annenberg with interviews of participants and organizers:

Photos from the Hackathon by USC Annenberg / Benjamin Dunn

Posted by MediaShift on Wednesday, October 14, 2015

Hack the Gender Gap: A Women’s Hackathoninformation page on MediaShift

Here’s a selection of feedback from participants. Some included their name for a testimonial, while some was anonymous.

“Was so inspiring to see so many young women digging into technology!”

“I enjoyed getting to meet people from around the country and getting to work with them. It was a great environment and I felt comfortable asking questions and being creative. Overall was a really great experience.”

“I never believed tech was the world I could explore, much less work in, until I participated in this Hackathon. It forced me to think in ways I never would have and made me realize that I am capable of working in the tech world and combine it with my love and education in journalism. Thank you!” -Veronica Quezada, USC

“I have participated in a number of entrepreneurship events in the past, but I have always been a minority in the room as a woman. Building a business in a weekend with a team of women was a completely new and phenomenal experience. I was inspired by the passion and determination of my teammates and the speakers throughout the weekend. Seeing women who have succeeded in technology and entrepreneurial fields empowered me to pursue my dream career.” -Sarah Darby, Missouri

“This event allowed me to meet and connect with ambitious and like-minded women. I’m already finding applications from what I learned at this hackathon in my classes and marketing internship. Definitely a weekend or people I won’t be forgetting any time soon. Thank you so much for hosting this event.” -Cadence Bambenek, Wisconsin

“The hackathon was a great experience. It’s empowering to be in the presence of so many accomplished women. The experience came and went far too quickly. My eyes are now open to the possibilities of virtual reality and I want more.” -Sallyann Ficarrotta UNLV

“Really enjoyed the event, though I do feel like the term ‘hackathon’ might be slightly misleading as it was more about a think tank/pitch session versus an actual build/hack.”

“Being that I didn’t have any prior experience with VR or pitching a product I think having all of the speakers before any work time would have been really helpful. I think having that knowledge before working would have allowed us to be more focused and efficient while creating.”

“I would’ve liked to see more specific direction on the project we had to create. I think this would’ve helped us focus on our idea faster and narrow it down.”

“Would have been great to have Nonny de la Pena speak on Friday night to kick off the thinking for the hackathon, and intro teams that night as well. The opening night panel would have been just as inspiring on the last day, and having the design/pitch on the day most of the work for the pitches is happening would have been great.”