The Past, Present, and Future of Pay-for-Content 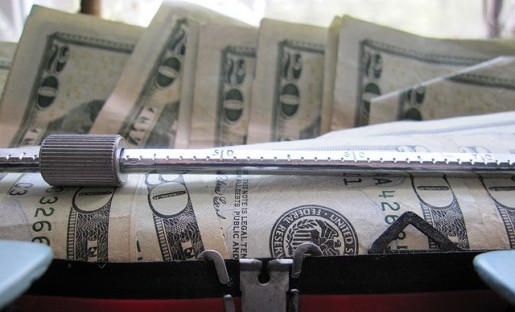 "I see the value of new information as something that declines, rather than immediately dropping to zero."

Publishers have always navigated between these two poles, even before the Internet filled the world with free information. Here are some surprising ways that printable content has been delivered and sold in the past, how our current landscape of pay walls and micropayments is evolving, and why I think we need the new publishing model that I’ve been working on.

In the 1540s, centuries before postage stamps and paperboys and not long after the invention of the printing press, the stock exchange in Antwerp started distributing to its (paying) members printed reports of the latest commodity prices, exchange rates, and shipping news. Thus publishing began with business publishing, which has led pay-for-content ever since, driven by investors’ timeless and universal desire to glean market-relevant information before others.

In this country, the colorful march of business news sales included a private “optical telegraph” of manned semaphore stations that relayed stock prices between Philadelphia and New York in the 1830s, and the stock ticker, which translated market-floor price data telegraphed from the floor of the NYSE into symbols we still use today.

For the rest of us, subscription publishing began with what we would now call crowdfunding, for books. The backers of a not-yet-written book contributed money in advance to get a copy, and as a reward they would be acknowledged in a list of subscribers at the end. The first illustrated edition of “Paradise Lost,” printed in London in 1688, listed over 500 subscribers. Later, book agents in the US peddled unwritten on practical subjects door-to-door. But by the late 1800s, people had been burned too many times by a disappointing final product, so they stopped advance-purchasing books.

Until the 1800s, it was all about newsstand sales. Newspaper and magazine publishers lacked delivery options. In 1810, newspaper delivery boys began bringing the morning paper to people’s homes, and between the 1820s and 1840s, the first pre-paid postage stamps let magazine publishers mass-mail their content to subscribers nationwide. These innovations established the general-interest content delivery regime that endured until the spread of the internet: books from stores (or catalogs), magazines by mail, and newspapers via daily dedicated delivery. (But business news went electronic sooner, triggered by the Nasdaq electronic exchange in 1971.)

Similarly, newsstand sales and subscriptions migrated online, but 20 years hence, both still struggle. Micropayments seemed like the logical successor to newsstand sales: on-demand, and with greater granularity and lower prices. But they aren’t the part of people’s lives that newsstand sales once were. Likewise, online and newspaper subscriptions don’t generate the income that print subs once did. But many new companies, projects, and publishing models are trying to make pay-for-content work again. Some are succeeding, at least sorta.

With micropayments, one old problem is that nickel-and-dime payments should demand a correspondingly tiny effort — like a single click, rather than a new login or credit card entry. They also shouldn’t ring up 20-cent transaction fees. In response to these two constraints, the most promising new micropayment schemes aggregate multiple publishers into blanket-login syndicates, and take monthly lump deposits into users’ combined payment accounts, effectively blending micropayment and subscription models.

Some schemes focus on voluntary contributions to publishers, like an online tip jar. Kachingle tried this in 2009 via an embeddable Kachingle button. The Sweden-based startup Flattr gained traction later by making it easy for anyone sign up, rather than individually pursuing partner publishers. Thousands of indie creators have registered for Flattr’s new way of letting people give them money.

Flattr also enabled publishers to participate without having to add a Flattr button to their pages. Their free browser extensions put a micropay button in the user’s navigation bar. Major destinations like Wikipedia, YouTube, Vimeo, Soundcloud, and Instagram all support Flattr donations in this stealth way. To further extend their reach, Flattr also tried piggybacking onto Twitter, sending micropayments to any Twitter user via the Favorite button. But then Twitter told them to stop in 2013.

What about publishers who want to charge for content– no pay, no see– rather than rely on donations? In the mid-2000s, the New York Times and others first attempted this with “hard” pay walls that locked out non-subscribers completely, then soon abandoned them after seeing their readership and ad reach plummet. Since 2010, many have tried again with “metered” (aka “leaky” or soft) pay walls designed to give non-paying readers access a limited number of articles each month, typically between eight and 20.

Metered pay walls are still up for national brands like the New York Times and Washington Post, and more niche-y outlets like Pando and Techdirt are trying them. But others, like Variety, the San Francisco Chronicle, the Dallas Morning News, and the Toronto Star have abandoned theirs. As Gawker critic Hamilton Nolan advises, metered pay walls only work for a few top news and investigative journalism outlets, plus highly focused trade, local, or niche publications. And readers can easily reset a meter to zero by deleting their browser’s cookies.

As with Flattr-style donation systems, payment schemes work best as umbrellas covering multiple publishers, so readers don’t have to open a whole new account to pay 20 cents. The startup CoinTent is developing a payment platform for publisher sites to support micropayments and offer subscription deals. And for publishers whose ad revenue is suffering at the hands of ad-blockers in browsers, Sourcepoint is building a system that detects the blockers, then prompts their users to cut a deal with publishers to either pay or see some ads. Otherwise it can “punch through” and show the ads anyway.

While you’re aggregating publishers for payment, why not also create a shared portal? This approach has worked for Blendle, a new, shared pay wall system that successfully supports several Dutch-language publications in the Netherlands. Retaining some of the spirit of donation systems, Blendle refunds readers for content that they don’t like. The New York Times and Washington Post are now distributed by the platform, which is planning to expand internationally. But some are skeptical that Blendle’s success with Dutch publications can replicate in the larger and less connected world of English readers.

In the mobile app world, the umbrella-access approach has also worked so far for “Netflix for magazines” apps like Zinio and Next Issue, which offer monthly subscriptions for on-demand access to hundreds of magazines. PressReader does the same for newspapers and magazines, and also offers a $0/month “pay as you go” option that prompts for micropayments as needed. Google Play sells monthly subscriptions, to an even broader variety of content, including non-printable products like videos and games.

We’ve come to expect news for free, but micropayments are standard and unquestioned in other contexts and places. Online gamers routinely buy power-ups and other in-game extras, and people in developing countries rely on mobile payment systems like M-Pesa daily. Micropay advocates hope that this comfort and familiarity will filter over to the rest of us.

Where micropayments are one-time things, subscriptions are a committed relationship. And they aren’t selling very well either, as Peter Kafka notes in an article on the recent merger of the two leading pay wall providers Piano and Tinypass.

All other things being equal, publications will naturally want to pick the platforms most likely to succeed. So the early-rising and best-capitalized options have the advantage. But ultimately the industry is still looking for sustainable monetization recipes.

I’m using WordPress as a test kitchen for such recipes, as are others. The popular platform lets publishers of all sizes try out new functionalities easily by installing code “plug-ins” that typically cost less than $100. A WordPress plug-in can conduct transactions, handle subscriber databases, and do whatever else, so creating a new plug-in is a quick and cheap way to guinea-pig a new publishing model. Only WordPress users can use it, but that’s a huge pool ranging from countless indie bloggers to sites like TIME, Quartz and TechCrunch. If small, early-adopting WordPress users find a new plug-in useful or profitable, it bubbles up to more established users, and non-Wordpress world should also want the same functionality.

So I’m excited about pay-for-content innovations on WordPress. One example is Phittle, a plugin-based platform designed to support a “News and Content Club” that pools publishers and offers readers monthly service plans for premium content. It’s like Blendle, but emphasizes native platform sharing and discussion. Another promising idea is Qbeats, whose Winqs plugin prices individual pieces of content dynamically, like airplane seats, calculating their real-time market value based on demand and other factors.

My own venture, Subramp, is a pay wall variant based on a simple curve — a ramp rather than a wall — that lets subscribers choose how much they want to pay. The more they pay, the sooner they can access each new piece of content once it’s published. The idea comes from the observation that the value of new information declines over time. I believe that pay walls should support this changing value, rather than just being online versions of print-era subscription cards, and that clear, predictable “subramp” pricing will lead subscribers to think more about the content’s time value and about who else has seen it already.

Demo of how a simple Subramp connects subscription price with access latency.

Along with my partners at IgnitionDeck, a Florida-based company that builds e-commerce and membership tools for WordPress, I believe and hope that Subramp will be a useful addition to the pay-for-content landscape. We look forward to developing it further, as a tool that takes Stewart Brand’s insightful line about information wanting to be both free and expensive, and adds Benjamin Franklin’s similarly wise dictum “time is money.”

Paul is a former editor at MAKE and Wired magazines and Timeline News. He previously worked as a software developer, and he has parlayed his fear of competition into a pretty good track record for pursuing new things that become important.