What Journalism Can Learn from the Edinburgh Fringe Festival 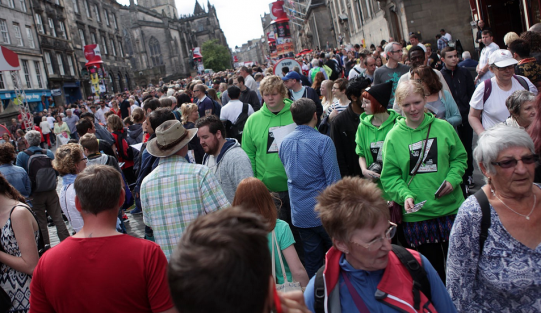 It goes from the intense, with “Le Gateau Chocolat: Black,” a one man show on depression, flipping to mirth. A Nigerian law student yearns to be an Opera singer, but on the way suffers denigrating abuse from his father. Then there’s the insouciant in “Jessie Cave’s: I loved her,” as a young girl, neurotic, fidgety, tells of attempted love. Lots of split personalities talking to herself.

"The idea of standing on a stage talking to an audience, changing your material ever so often, refining your craft day in day out sounds daunting. but journalism is performance in some way."

I’m in Edinburgh, the event horizon for comedy and innovatory drama. You’ve never seen anything like it. Not the crowds, but the talent on show and the hard sell on content, often by the content providers. As day breaks, the streets gradually become a blanket of leafletters and performers; young, old, the quirky, and the traditional.

‘Here you are mate, you’ll love this show — 3 O’clock’. Sorry we’re off to see “Nish Kumar: Long word…Long word…Blah Blah Blah …I’m so clever.” He is.

“Is there a line you can’t cross in comedy?” Nish asks, before deconstructing his own questions and proceeding to prove his thesis. Nish’s work rate — he’s been doing this for ten years and has just turned 30 — has opened him up to a wider audience. Breaking news: He’s just gone on DVD, with the Pajama Men courtesy of Soho Theatre. I’m holding the first copies. Disclaimer: I was a digital consultant for the producers who put this together, hence me being in Edinburgh.

Whatever you do though, don’t get up during Nish’s show to go to the bathroom, unless you feel like being written into his act.

My guide who now works for one of the UK’s leading comedy producers used to run shows here. In his mid-20s, he’s a veteran of the Edinburgh festival. There’s an art to drawing people into your show, he says. You need to engage them in conversation.

My mind then begins to drift. This whole ecosystem is literally a parody of journalism. And equally important, it could teach us scribes and video makers a thing or two.

Imagine the Director-General of the BBC Lord Hall standing akimbo outside the BBC imploring punters to come and try what he has to offer. And because nothing is a given, he has to do it again and again and again — at least for a month. Or what about Jon Snow? No Jon would actually be up for that! But you get the point. Audiences aren’t readily available. You have to work for them.

In “Papa CJ Naked’s show,” one of the finest Indian stand-ups, the show is free, but in keeping with tradition, you pay what you think he deserves. At the end of the show, bucket in hand, er semi-naked, he’s asking for your cash. Nothing can be more humbling. Does he wish he made something with his Oxford MBA? He has.

The crisis in journalism, though real, is generally a Western one. In many of the conferences and talks in its bow, it’s the loss of revenue from having it so good for so long, or the challenge to that particular type of Western hegemonic voice, that’s been irritating.You know the voice that purports to know it all, when others are suitably more qualified.

Edinburgh’s egalitarian movement means anyone can punt a show, so long as you can book, find somewhere to stay, and do your own PR. But it’s a chance to play on a leveling field.

Yes, some shows command more attention than others; some too have that leg-up from years of performing. But there is diversity being entertained on a scale nonetheless across styles, age, and ethnicity.

Oh, how journalism could learn from this — and perhaps it now is, though this recalibrating of journalism’s landscape has a perennial habit of generally defaulting into known and familiar norms.

We extol the use of the mobile phone. Brilliant technology it is, but its progenitors recognize it requires showing a new aesthetic in story form, not more of the same.

The BBC’s recent trailer for its new season of drama on BBC 2 profiled no minorities. And to think how many hands the trailer had to pass through to be approved and no one said, ‘er guys… do you see what I see?’

The idea of standing on a stage talking to an audience, changing your material ever so often, refining your craft day in day out sounds daunting. but journalism is performance in some way.

At some point though, it might have to drop its privileged status.