The Importance of Collaboration Between Journalists and Technologists 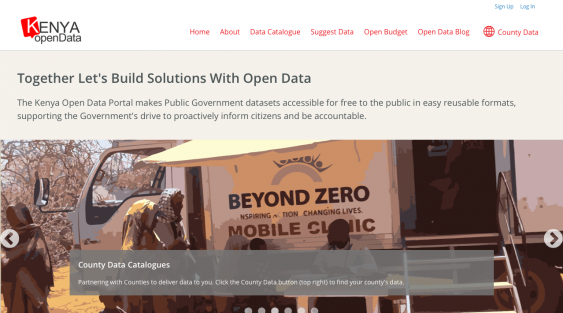 The launch of the Kenya Open Data Initiative in July 2011 led to the release of hundreds of data sets which, for a few discerning journalists and editors, opened up a new way of discovering, reporting and disseminating news. From the new data sets, journalists can learn details about budget allocations to Kenyan counties and also gain insight into how these allocations impact people’s lives.

But the initial media excitement over the release of the data has since waned as not many journalists have the skills to access the huge amounts of data available, analyze it and create interactive visualizations to help them tell their stories better.

"Understanding that not every journalist can become a coder and not every coder is a journalist, it is imperative that they learn to collaborate to make sense of the huge amount of data that is now available to the public."

On the other hand, there are a growing number of technologists who are able to gather and organize disparate data sets to make the information easier or convenient to consume.

Understanding that not every journalist can become a coder and not every coder is a journalist, it is imperative that they learn to collaborate to make sense of the huge amount of data that is now available to the public.

The future of journalism lies in such collaboration. If a photograph is worth a thousand words, a well-mined data set, properly interrogated and presented in a simple, compelling and interactive manner can elevate a run-of-the-mill story to something that resonates with the public.

The Case for Collaboration

The benefits of such collaboration were evident during a four-day data masterclass held in Nairobi recently under the theme “Using Data to Report on Devolution” [the term used to describe Kenya’s transition to a county government system]. The masterclass was held to impart skills and knowledge needed by journalists to find and analyze data for investigative stories on county expenses.

Journalists were taught to navigate data sets available from the Treasury, the Kenya Open Data Initiative, the Kenya National Bureau of Statistics, among others. They were able to extract information and come up with compelling stories not only about the budget processes and outcomes, but also the impact of certain county budgets on issues such as the provision of ARVs in hospitals and the challenges faced by small-scale coffee farmers.

Among tips provided by the trainers for journalists working with data:

Both journalists and techies have to leave their ‘silos’ and understand each other’s roles and what they can both bring to the table when it comes to storytelling. As one of the participants said, “Data may be king but it has to mean something.” Journalists will still have to interrogate and authenticate the data and together with the techies, present the information in a useful and compelling manner.

Yet, not enough editors are willing to go the extra mile to encourage these kinds of collaborations due to a lack of commercial/business models that would translate to new revenue streams.

There are those who have seen the potential; for example, the StarHealth portal is a collaboration between Code for Kenya and The Star newspaper. The portal allows members of the public to access information about doctors and health services, provides the public with visualizations of health sector data, and aggregates health stories from The Star website.

Find My School is a platform to easily find the best school for users in three simple ways.

Code for Kenya has also had successful collaborations with the Nation Media Group (FindMySchool) and the Standard Group (CountySafety). These projects were created by Code for Kenya technologists who were embedded in the newsrooms of those organizations. They have provided proof of what collaboration between journalists and techies can achieve.

While some editors understand that such projects can drive up numbers, there are underlying fears that data journalism takes too much time and requires too much specialization or in most instances, the acquisition of additional staff such as coders.

With shrinking editorial budgets and the never-ending demands to make journalism pay for itself, it is time for forward-thinking news managers and editors to adapt and find new ways of continually engaging and growing their audiences and readers.

At the heart of all this lies the imperative for journalists to continue telling compelling stories that serve the public. Any tool that helps us do this, any skill that can be brought on board to do this, should be welcomed.

Catherine Gicheru (@cgicheru1) is a Knight International Journalism Fellow (Kenya) and veteran Kenyan editor who is working with the Code for Kenya open-data initiative to promote data journalism and civic innovation as a means to strengthen storytelling and audience engagement.