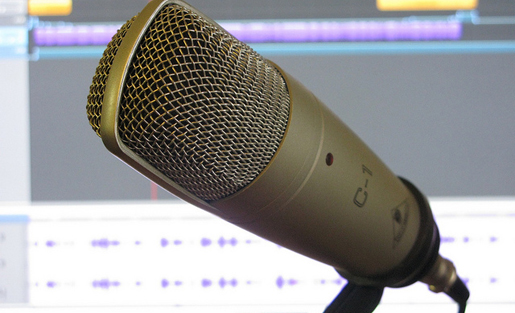 MediaShift is excited to be producing our next Collab/Space innovation workshop in San Francisco focused on audio innovation and podcasting startups. The workshop is sponsored by the Donald W. Reynolds Journalism Institute and will be hosted at KQED.

MediaShift’s Collab/Space events have been a huge hit by combining inspirational talks, startups and innovation projects, improv comedy techniques and small-group breakout sessions. We aim to bring together a diverse group of participants, including entrepreneurs, journalists, publishers, technologists, designers, marketers, investors and major players in the tech and media scene in San Francisco.

Keynote speakers include Steve Henn, NPR’s technology correspondent, and Aminatou Sow, co-founder of “Call Your Girlfriend,” with MediaShift’s Mark Glaser as emcee. The workshop will take place on Sept 12, 2015, from 9 am to 5 pm, with a mixer afterwards from 5:30 to 7:30 pm.

Project Description: Audiosear.ch is a full-text search and recommendation engine for podcasts. It’s the most comprehensive source of data about podcasts and radio in the English language. Our goal is to help audio distributors and podcast apps bring better search, discovery, and sharing experiences to audiences.

Presenter Bios: Emily Saltz, Head of Content Strategy, earned a B.A. with honors in Linguistics from UC Santa Cruz. While there, she got up close and personal with speech formants as a research assistant in the Phonetics and Phonology Lab, moonlighting as an eye-tracking technician. A lifelong public media fan, she used episodes of “This American Life” to teach Russian students English when living in Saint Petersburg, Russia. She oversees Pop Up Archive’s industry newsletter and archival audio podcast, Popcast. She also works closely with Pop Up Archive’s partners to make their sound searchable.

Anne Wootton is CEO of Popup Archive, and holds a Master’s degree from the University of California Berkeley in Information Management and Systems, where she focused in digital archives and the sociology of technology. She is a winner of the 2012 Knight News Challenge: Data and has worked closely with federal grant agencies and foundations on library innovation and improving access to audiovisual collections. Before arriving in California, Anne lived in France, and managed a historic newspaper digitization project at Brown University. When she’s not building the future of audio, she’s most likely thinking about Abraham Lincoln’s Classical influences, reading about outer space, or dancing.

Project Description: PodClear is the simplest way to record remote interviews with pristine audio quality. Just send a your guest(s) a link, connect and record high fidelity audio locally from all sides of the call.  It functions as a full VoIP network, complete with video and chat functionality and can record an unlimited number of participants. After the call PodClear provides separate lossless audio files for each person as well as a mixed track for quick publishing. We provide 44.1kHz 16-bit WAV files that are completely raw, available immediately, and integrate with Dropbox and Google Drive.

Hannah Russell-Goodson has an undergraduate degree in International Affairs and Social Work with an emphasis in Social Entrepreneurship.  For the past 4 years she has been working in experiential education and curriculum development and has recently served on the board of Young Women’s

Social Entrepreneurs in San Francisco. Hannah is part of the founding team for PodClear, audio recording software made fore remote interviews.  She is passionate about education, food, and being outside.

Spencer Handley is a Full Stack Engineer and Designer, he has a has a passion for learning and loves to build tools that enable others to share their ideas with the world. When not writing code, he likes to travel, play music and meditate. He also wrote this bio in the third person for himself, so don’t take it too seriously.

Description: Radio-Canada’s Thematic Audio Thread aims to empower users to build their own listening experience straight from our vaults to their smart and curious ears. The Thematic Audio Thread is inspired by the concept of on-demand Internet media content.  It is a web-based digital audio service built around key themes (history, science, politics, family matters and more) and offering a variety of smart talk genres (audiobooks, documentary, debate, interview, comedy, etc.). The result is a mix of what has been done on digital platforms for music and what has been accomplished by specialty television channels.

Users can create playlists based on their interests and the amount of time they have on hand for a listening session.

Presenter Bios: Elisa Eve De Serre is Head of Digital Production for Radio-Canada ICI Première. She has been part of the digital team

since 2012 and her mandate is to oversee the production of content and monitor web projects at all stages of digital development of the digital platform of talk radio. She provides expertise in order to identify trends and business opportunities. In the upcoming months, she will work with her team to put together the live thematic audio thread.

Martin Dupont is an Applications Solutions Architect. He has more than 12 years experience in web development at CBC/Radio-Canada with a primary focus on Radio and Television application solutions.

Project Description: Raur is a social platform for podcasts. A place for communities to form around on-demand audio, interact with creators, and anyone to easily publish content. Although podcasts produce a tremendous amount of engagement,

it is difficult to build an audience online relative to all of the other mediums. Raur aims to change that.

Presenter Bio: Kevin Kliman is co-founder and CEO of Raur. A graduate of Brown University and the University of Southern California’s Dental School, Kevin spent two years working as a dentist while being involved in startups since his senior year of high school. Having started Amalgam Waste Solutions (sold to Toronto VSNM), iStudyCards and DentalChimp before Raur.

Project Description: There are tons of amazing podcasts. Riveting stories. Gifted storytellers. But Reveal combines all of that with in-depth investigative journalism that has an impact. Reveal is important and necessary, because it gets people to listen and to care about issues affecting people’s lives. Through its team of investigative reporters and producers, along with partners across the country, Reveal takes us to hidden places, explores under-reported stories and holds the powerful accountable.

Presenter Bios: Delaney Hall is a reporter and producer with Reveal, a public radio show and podcast from the Center for Investigative Reporting. Before that, she produced for State of the Re:Union and helped the show win a Peabody Award. Delaney also co-created the Austin Music Map, one of ten Localore projects aimed at inventing new models of storytelling for public media. She’s reported for 99% Invisible, NPR’s All Things Considered, BBC Radio 4, and Latino USA, among other shows.

Susanne Reber is the executive editor of Reveal. Before her current gig, Susanne formed and led NPR’s first Investigations Unit, which won multiple Peabody Awards, a Polk award, a Robert F. Kennedy Award and others during her tenure. Prior to moving to the U.S., Susanne spent 23 years at the Canadian Broadcasting Corp., where she held various editorial leadership roles, including deputy managing editor of National Radio News and executive producer of CBC’s Michener Award-winning Investigative Unit from 2003 to 2009.

Project Description: Spoken Layer is a digital audio platform enabling media brands to tap into the power of audio. SpokenLayer turns written media into professionally voiced audio, distributes the content to our publishers, audio networks, and partners, and targets advertising and sponsorships to listeners. We’re the only end-to-end platform handling the whole process of building and monetizing an audience with digital audio. Publications such as Time magazine trust SpokenLayer to create an audio edition for their brands.

Presenter Bio: Will Mayo is the founder and CEO of SpokenLayer. Prior to founding SpokenLayer, Will ran SoundPipe, a distributed mobile/web streaming and recording platform that enabled capturing and sharing of HiFi audio. Earlier in his career, he designed server processors at Intel and created high frequency trading algorithms and floor-trading tools for Goldman Sachs. He also taught engineering design for the Johns Hopkins CTY program. With SpokenLayer, Will was part of the first class at Matter.vc, the accelerator dedicated to new media technology. Will is a graduate of Lehigh University, where he earned his BA in Electrical Engineering and Product Design, and MA in Computer Engineering and Ergonomics. A focus on audio comes naturally to Will.

Presenter Bios: Grace Regan and Sagar Gupta connected over a mutual passion for radio. They met at UCL where they ran the university radio station. Grace is an expert in millennial media habits and has contributed articles to the Guardian and Huffington Post, to name a few. She has also spoken on the topic at the BBC. Sagar previously worked for the UN and the MLDI where he oversaw a project to develop an app to alert journalists when conflict areas were getting dangerous.

Project Description: Wavelist is a social network for podcasts. It’s the easiest way to discover and share interesting podcasts with your friends. Follow people you care about to

find out what they’re listening to. Curate episodes into playlists. Share podcasts, and get recommendations based on your activity.

Presenter Bios: Ben Werdmuller previously co-founded Elgg, an open source social platform used by global organizations, including Harvard, the Canadian government, and the World Bank. He has a degree in Computer Science from the University of Edinburgh.

Erin Richey is a UX specialist who has designed social and information platforms for brands like Microsoft, eBay, Intel, and Coca-Cola. She has a degree in Cognitive Science from Occidental College.