Threats, Attacks, Jail: What’s Coming Between Us and the Rohingya Story 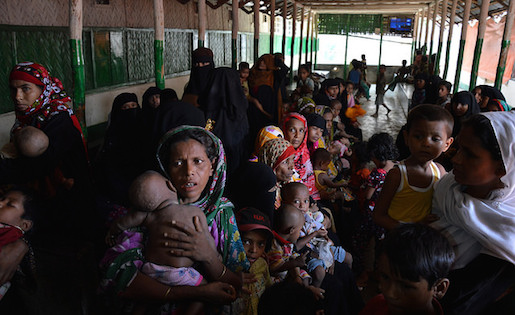 Images of migrants packed in rickety boats grabbed the world’s attention in May. The majority of those were Rohingya Muslims fleeing Burma who arrived on the coasts of Thailand, Malaysia and Indonesia, only to be sometimes pushed back out to sea.

The Rohingya are a Muslim ethnic minority group residing in Burma’s Rakhine state, formerly known as Arakan. In March 2014, Burma announced that the approximately 1.3 million Rohingya would have to register as “Bengalis” — a term used to deny them recognition and to imply that they are all migrants from Bangladesh. They are denied citizenship, crowded in squalid camps and socially reviled, often being the target of rhetoric by Buddhist nationalist groups. They have been called the most persecuted people in the world, facing what Human Rights Watch has called “ethnic cleansing” caused by crimes against humanity.

"Burma's official position is that there are no Rohingya, and Human Rights Watch has noted an avoidance of the term 'Rohingya' by the UN Special Envoy to Burma, Vijay Nambiar."

A large rural slum has sprung up around the UNHCR-government run camp of Kutupalong, Bangladesh, which houses Rohingya refugees who are officially recognized by the government. Photo by EU/ECHO/Pierre Prakash for the European Commission and reused here with Creative Commons license.

Forced to flee overseas, an estimated 90,000 have fallen prey to smugglers and traffickers since early 2014. The United Nations estimates that around 1,000 people have died on the way.

Burma rejects widespread criticism that its treatment of the Rohingya is a root cause of the current exodus. And while images of the families suffering on the boats circulated around the world, journalists and local politicians face restrictions as they try to report on and speak out on the issue.

In late May, Burma’s navy refused to let journalists approach the remote island of Thamee Hla, at the mouth of the Irrawaddy river. More than 700 migrants were said to be held there after they were found drifting in a boat off Burma’s coast. Journalists who tried to take small boats out to the island were either turned back, or briefly detained and questioned. Four Associated Press journalists were among those who were detained. Some were forced to hand over their camera memory cards, or ordered to sign documents promising not to try to make the journey again.

Blocking access to Thamee Hla meant that no media or aid group was able to verify the migrants’ origin. Burma denied the so called “boat people” were Rohingya, saying that all had been from Bangladesh.

Amnesty International has just published a report describing the dangers of reporting on the violent clashes between Buddhists and Muslims, and on the situation of the Rohingya. Journalists have had their equipment destroyed, received abusive letters and phone calls and been threatened with physical violence by extreme Buddhist nationalist groups. Some have received insulting messages on social media. Newspapers have reported being threatened with demonstrations outside their offices or warned that “actions” will be taken against them.

Zarni Mann of the Irrawaddy media group, who had been reporting on clashes in July 2014, told Amnesty:

“During the first day of the violence some men wearing Buddhist monk’s robes and young men armed with iron bars and swords tried to destroy my camera and phone. They told us they would beat us to death because they don’t want their pictures on the newspaper and they also shouted: “No more questions. Beat them up! Smash their heads.” Some of the mob accused me and my colleagues of being members of an Islamic media. They also threatened our photographer saying that they would kill him if they saw their pictures published.

Later we saw the picture of our photographer circulated on Facebook by some individuals supporting Buddhist nationalist movements such as the 969 and the Ma Ba Tha. Underneath the photo was his name and the message: “Find this man, he is a photographer for the Irrawaddy, he reports the news for the Muslims, kill him or destroy his camera.”

There were “strong suspicions” that military authorities may have been behind subsequent threats and cyberattacks against the Irrawaddy in October 2014. The media group has raised questions about whether Burma’s extremist groups, including Buddhist monk U Wirathu’s 969 movement, receive tacit support from the military.

On June 2, Burmese politician Htin Lin Oo was sentenced to two years in jail and hard labor for comments he made in a 2014 speech intended to discourage Buddhist extremism and calls for violence against the Rohingya.

The judge deemed that the former information officer with Aung San Suu Kyi’s National League for Democracy (NLD) party had defamed the entire Buddhist religion. Amnesty International criticised the verdict as a serious blow to both freedom of expression and religious tolerance in the country, saying “Htin Lin Oo did nothing but give a speech promoting religious tolerance — we consider him to be a prisoner of conscience who should be released without conditions.”

The UN human rights office agreed, stating that the politician had spoken out courageously against the use of Buddhism as a tool for extremism. “Rather than prosecuting individuals who brazenly call for the Rohingya to be killed, for hate speech and incitement to violence, the authorities have jailed a peaceful advocate who dared to question the misuse and manipulation of religion for extremist ends.”

When religious violence between Buddhists and the Rohingya Muslims erupted in Meiktila in central Burma two years ago, local NLD politician Win Htein spoke up for the minority Muslims. “I was accused of bias against Buddhists,” He Win Htein told Reuters. “I have never regretted my decision to protect a minority.”

The NLD will soon contest a general election, likely in November, and Win Htein admits his actions could lose the party votes among the Buddhist majority.

Party leader and Nobel peace laureate Aung San Suu Kyi has been criticised abroad for not speaking up for Muslims and other minorities in Burma. Win Htein, 74, a Suu Kyi confidant and former political prisoner, defends her silence. “If she speaks in favor of Rohingya, she’ll be accused of being a Muslim lover. If she speaks for the (Rakhine) people, she’ll be accused of being a nationalist and a racist. That’s why she has stayed quiet.”

Just a day ago, Suu Kyi told Channel 4 News that she has spoken out against Rohingya persecution but perhaps not in the kind of “pyrotechnic” language her critics may have expected.

Burma’s official position is that there are no Rohingya, and Human Rights Watch has noted an avoidance of the term “Rohingya” by the UN Special Envoy to Burma, Vijay Nambiar. The UN Human Rights Council was bolder in using the term in a recent statement, which noted the importance of a long-term approach to address the crisis and its root causes.

In the meantime, in the lead up to the elections, observers have expressed concerns about the rising religious extremism in Burma. What will this mean for the Rohingya? We end with the words of David Kaye, special rapporteur on the promotion and protection of the right to freedom of opinion and expression, who said in a February 2015 interview, “the rhetoric and the policies from both the government and the opposition need to be much more open to the needs of the Rohingya and much more protective of them, given the attack on them that they’re facing from a variety of corners…. [and] the government really needs to be clear about what is the scope of legitimate speech, which is really broad. But it doesn’t extend to inciting violence against vulnerable communities.”