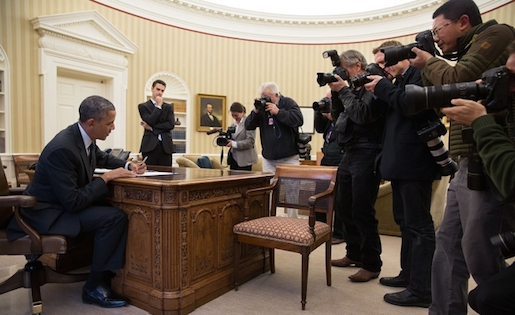 President Barack Obama addressed a range of topics while in Kenya. The Kenyan government said it had planned to discuss security and trade, while opposition parties and civil society wanted good governance and human rights added to the agenda, according to news reports. We had hoped the discussion included the commitments to improve press freedom that the Kenyan government made to CPJ last week.

"Just as the newly planted trees along Mombasa Road need to be tended to last longer than a presidential visit, a culture of press freedom must be actively nurtured in order to take root in Kenya and avoid further broken promises."

On July 15, we released our special report, “Broken Promises: How Kenya is failing to uphold its commitment to a free press,” in Nairobi to a room full of more than 50 Kenyan and foreign journalists. The report found that a combination of legal and physical harassment, as well as concentration in media ownership, is making it increasingly difficult for journalists to work freely in Kenya.

Economic journalism training in Nairobi in 2012. Photo by David Brewer on Flickr and reused here with Creative Commons license.

Potential on display, problems on the ground

Kenya’s potential — including strong economic growth and stability and openness relative to neighbors like Somalia, Ethiopia and Eritrea — was on full display for Obama. His arrival saw a flurry of work, such as upgrading the Mombasa Road that connects the airport to downtown Nairobi. But alongside these improvements, Kenyans are grappling with corruption, land-grabbing and a series of deadly terrorist attacks. CPJ’s report found that journalists who cover these and other sensitive topics are subject to harassment and violence, and that attacks on the press in Kenya happen with almost complete impunity.

Following the launch, Kenya’s cabinet secretary for Information, Communications and Technology (ICT), Fred Matiangi, initially dismissed the report as “unscientific” and a “badly crafted joke,” according to media reports. But in his office the next day, CPJ Executive Director Joel Simon, East Africa Representative Tom Rhodes and I had a frank and constructive meeting with Matiangi and his colleagues in the ICT ministry.

Matiangi said he disagreed with the report’s characterization that the Kenyan government had failed to honor its commitment to press freedom. “We are humble enough, we are not angels. But we deserve more from our critics,” he said, rejecting the notion that Kenya had broken any promises. The notion that the media was not free relied on an “old myth” which had been consigned to the past, he said, adding that there had been a significant improvement in conditions for the media in Kenya in recent years and that President Uhuru Kenyatta was determined to create a culture and an environment that respected press freedom.

Uhuru Kenyatta, the president of Kenya, at the International Criminal Court (ICC) at the Hague in Oct. 2014, for a hearing over his indictment on charges of crimes against humanity. Photo by Day Donaldson and reused here with Creative Commons license.

To that end, Matiangi offered to arrange a meeting between the cabinet secretary for the Interior and Coordination of National Government, Joseph Nkaissery, and CPJ to follow up on the case of two journalists, Nehemiah Okwembah and Reuben Ogachi, who were attacked in Tana River County in southeast Kenya in April by members of the paramilitary police and beaten with wooden clubs and metal rods. Matiangi noted that the Kenyan government was among the first to denounce the attack and vowed that authorities would “get to the bottom of the matter.” Matiangi added that the Inspector General of Police had promised a thorough investigation and once it was concluded an indictment was expected.

Matiangi also expressed willingness to further discuss the issue of criminal defamation, again pledging to arrange a meeting with Nkaissery — though not before saying the government was exasperated with the media’s “irresponsible” reporting. In our report, CPJ recommended that the Kenyan government repeal its criminal defamation law and that journalists should not require a license to do their work. Matiangi stressed the need to maintain laws such as criminal defamation and to focus on building media professionalism, but CPJ emphasized that civil defamation laws already provide for redress.

The meeting was inconclusive regarding the April 2015 murder of John Kituyi and the January 2009 murder of Franci Nyaruri. Matiangi pointed out that many murders went unsolved in Kenya and that this should not be characterized as a “broken promise” by the government, but noted that the cases were still open for investigation.

In a press conference following our meeting, Matiangi confirmed that the discussions had been useful and candid and that police investigations would ensure justice. “Nothing will tempt us to encroach on press freedom,” he said.

But, as CPJ’s Simon observed at the press conference, if a commitment to delivering justice is to have meaning, it must bear results. Just as the newly planted trees along Mombasa Road need to be tended to last longer than a presidential visit, a culture of press freedom must be actively nurtured in order to take root in Kenya and avoid further broken promises.

Sue Valentine, CPJ’s Africa program coordinator, has worked as a journalist in print and radio in South Africa since the late 1980s, including at The Star newspaper in Johannesburg and as the executive producer of a national daily current affairs radio show on the SABC, South Africa’s public broadcaster.