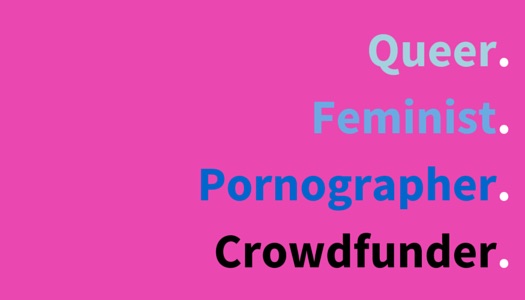 "There’s no room for anything else in my brain right now. I start doing something else, and then 20 seconds later I’m back on Twitter." ~Shine Louise Houston

Shine Louise Houston is now trying rally her community to crowdfund her next project.

So far, the benefits are outweighing the drawbacks. At the writing of this article, Houston’s campaign, co-helmed by marketing director and frequent Pink & White performer Jiz Lee, has raised more than $17,000. I spoke to Shine by phone about her crowdfunding campaign, the surprising reason the campaign was shut down for a day, the role crowdfunding plays in the creative lives of women, and the importance of control over your own work — no matter the genre. Below is an edited version of our conversation, as well as questions answered by Jiz Lee via email.

Shine, this is your first time crowdfunding. Is it what you expected, and how is it going so far?

Shine Louise Houston: It’s a little unnerving, because every time we get a donation we’re like “woo hoo,” and then we go an hour or a day without a donation it’s like, “Oh, we’re fucked.” It’s an emotional roller coaster, but it’s a good experience. Money with no strings attached. I don’t have to pitch to someone else’s company; I don’t have to take into account someone else’s vision. If I do this, I can film this exactly how I want to do it. I can take my time and do it right.

Why did you crowdfund for this project?

Houston: We have a decent amount of money to throw at it, but to get it right, pay people what they’re worth, I needed a little more. I didn’t want to do the usual plan of going to a larger company … I wasn’t doing that this time. I’ve been working on this script for the past four years, really wanted to do this my way.

Jiz, Shine gives you credit for finding the partners who contributed perks for the crowdfunding campaign. Could you share with me a little bit about how you reached out to those entities and convinced them to participate?

Jiz Lee: We’re fortunate to have developed long-standing relationships with many sponsors over the ten years Pink & White has been in business. For example, we regularly work with manufacturers to offer sex toys to performers on CrashPadSeries.com. The toy company gets to show off their product, viewers get to see the toy in action, and performers get to take the toy home with them to keep. It’s a symbiotic, win-win situation. Many of these businesses generously donated to the campaign.

Other perk donations came from colleagues and industry peers who saw an opportunity and reached out to us. There are many more perks to come; IndieGoGo only allows 20 perks at a time, so we’ll rotate the remaining perks over the final days of the campaign.

Houston: We were very upfront with IndieGoGo, told them exactly what we were doing. We started the campaign, it was going fine, then a couple of days in our campaign was suspended, and we thought, “Oh, okay, this is where the problem starts.” But Indiegogo said, “Oh no, it’s not the porn thing, you just can’t have backers signing up to be part of a contest.” So we fixed that by removing the raffle tickets from the Goodie Bags that come with the Party Perks, and our campaign got back up, and it was no problem. Since then, everything has been smooth.

What role do you think crowdfunding plays in the way women can produce their own content?

Houston: It helps women cut through the BS. Plus, you have a chance to connect with your core audience, the people who believe in your project. It’s a lot different from going to one large institution and having them have control over the project. You’re still asking for money for your project, but there’s a shift in power from the investors to the audience.

How did you prepare your existing fan base for the campaign?

Lee: We collected the emails of everyone who has ever corresponded with us, we emailed anyone who has ever been a member of CrashPadSeries.com, and because we’re still known for our DVDs, we also reached out to the retailers who have carried our films, to tell their staff and include the campaign in their newsletters. And, we continue to utilize our presence on social media.

It’s our first time running a crowdfunding campaign. It’s also one of the biggest projects we’ve embarked upon as a company. In working to make our goal, we’ve honed our marketing efforts and improved our community engagement. Shine held her first Reddit AMA, and she’s been more active than ever on social media, which in turn has made her a more recognizable figure to represent her company. As a result, we’ve enjoyed an increase in followers, a notable spike in traffic and subscribers, and lots of potential to build new relationships. Though stressful, running this campaign has been one of the best things to happen to Pink & White Productions. It’s a wonder we didn’t think of trying this earlier.

MediaShift: Jiz, I read that you started with Pink & White as a performer. What about Shine and Pink & White has gotten you to be more involved as their marketing director and the mastermind of this campaign?

A website needs human resources, so it was roughly around that time in which I became more involved behind the scenes helping to produce and maintain the site as well as manage its affiliate program. (My background is in non-profit arts administration and freelance web production, and at the time I was working as an Online Marketing Director for a larger company.) As the subscribers grew, so did my job. Little by little — over the course of about five or six years — my job grew and took shape. In 2013, Shine invited me on full-time. Without hesitation, I quit my day-job to work for her porn studio.

A full-time paid position in queer porn is a rare opportunity, so I’m proud of the hard work I’ve put in over the last 10 years to get to where we are today. It’s undoubtedly the best job I’ve ever had, and I’m incredibly grateful. It also calls for a combination of skills that I’ve honed over the years in previous professions, utilizing creative problem solving in working with shoe-string budgets and minimal resources. I’m able to make a lot out of very little, which I hope will continue to benefit Pink & White’s mission, and radical visions of sex on film, for years to come.

What’s something that has surprised you about crowdfunding?

Houston: Just how all-encompassing it is. There’s no room for anything else in my brain right now. I start doing something else, and then 20 seconds later I’m back on Twitter.

Any suggestions for other filmmakers thinking about crowdfunding for the first time?

When do you start shooting this project?

Check out Houston and Lee’s crowdfunding campaign on IndieGoGo.

Julie Keck is a social media consultant and filmmaker. She writes and produces original series for tellofilms.com. She co-authored the book Social Media Charm School and has spoken about social media engagement, crowdfunding, and film at SXSW, the University of Notre Dame, Columbia College, DePaul University, the Chicago International Film Festival, Toronto WebFest, and more. Julie is also the social media and newsletter editor for MediaShift. If you’re up for some fun, follow her on Twitter: @kingisafink.