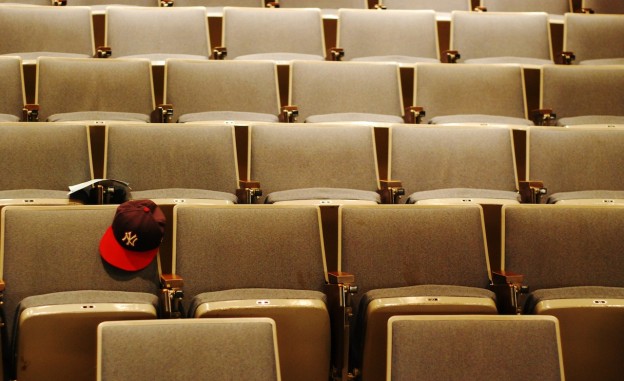 Dan Kennedy’s first tip that a student article had a problem was quotes that just did not sound right.

“[Students] don’t know what originality means. They think if they type it themselves that is OK — even if it was already published somewhere else.” -Aaron Chimbel

So the Northeastern University associate professor and interim School of Journalism director plugged them into Google and found they had come from a press release quoting then-Boston Mayor Tom Menino — who was not even a source in the story.

When Kennedy contacted the actual source, he found the student had indeed conducted an interview with him, but the quoted words were never spoken.

Plagiarism has likely been around since quill and ink first met paper, and professors have gotten fairly good — in the spirit of Potter Stewart — of knowing it when we see it.

But students in this world of ever-changing technologies have fresh ways to cheat, and instructors are relying on both old and new means to catch them and to help them shape their ethical decision-making.

“Students have so much pressure on them and they feel like they can’t make a mistake, so they are willing to take shortcuts,” said Aaron Chimbel, of Texas Christian University. “A lot of students also say they didn’t know what they were doing was wrong, which means they don’t absorb in high school what is OK and what is not.

“They don’t know what originality means. They think if they type it themselves that is OK — even if it was already published somewhere else.”

Any journalism program worth its AP Stylebook drills into students from the syllabus and beyond the plagiarism perils faced by Jayson Blair or Jonah Lehrer or the foibles of fabrication learned through Janet Cooke and Stephen Glass.

Yet students every semester are still caught in the cheating web — with many citing a desire to get good grades, the ease of acquiring materials and simple laziness.

A 2011 article released by the American Psychological Association cited a survey by Rutgers University professor Donald McCabe, showing two-thirds of students admit to cheating on tests, homework and assignments.

Jane Marcellus, a professor in the School of Journalism at Middle Tennessee State University, said unclear boundaries in print or traditional TV broadcast make it easier for journalism students to cross ethical lines.

“With material available in multiple forms online, the sense of ownership is less obvious,” Marcellus said via email.

Take the student who submitted a strong first draft with a decent lead, solid inverted pyramid style and quotes and facts from a pair of qualified sources. Unfortunately, those sources had provided their comments to our local daily newspaper.

The student’s rationale for using the material: Her story was due and she had not been able to reach those sources, so she used the other article.

“Sometimes students don’t get the concept that you have to actually talk to people in person,” Marcellus stated. “They’re shy, or lazy, about interviewing. They want to interview their friends or family members, which is a conflict-of-interest issue more than classic plagiarism. I see that a lot and have learned to set down rules at the outset and to get them to find different types of sources for a story.”

The digital revolution has allowed plagiarism to flourish in ways few of us could have imagined. Quotes and facts are easily scraped from online sources — sometimes tweaked to give the illusion of original reporting, sometimes not.

Even when students find online information, they appear reluctant to attribute and link back to the original — the proverbial giving credit where credit is due.

Those same web tools students use to easily plagiarize, however, are also used by professors to apprehend cheaters.

While Kennedy said Google remains his best defense against plagiarized material, universities around the world have since 1997 been using TurnItIn, which compares assignment submitted through a learning management system to a database containing billions of pages of digital content.

Photo by cayoup on Flickr and used here with Creative Commons license.

Research has shown the potential to be caught through TurnItIn can be a deterrent to cheating, but Brandon Szuminsky, an instructor in the Department of Communication at Waynesburg University, said the program is less applicable to journalistic writing. The reason: It won’t help to catch the Jayson Blair or Stephen Glass technique of making up sources or quotes, or fabricating whole stories.

“My colleagues in English swear by things like TurnItIn, but I find for journalism courses that these are unnecessary and likely ineffective considering the amount of primary info the reporters are gathering,” he said in an email. “After all, it’s a little tough to plagiarize a story about an event in the student center.”

To combat that kind of cheating, professors say they must have to be more creative in their assignments.

A 2008 research project out of Ohio State University showed learning related to mastery of a skill (actual reporting and writing), as opposed to simple performance (a worksheet or quiz), decreases the desire to cheat among middle school students.

Chimbel also advocated adding assignment requirements like a video or recorded audio interview to motivate students to prove they have real sources they talk to in real time.

Confronted by ever-more opportunities for plagiarism, from social media to press releases that seem ripe for duplicating, professors agree it is the job of every teacher — from K-12 through higher education and into the workplace — to reinforce the ethics that should set journalists apart from other professions.

“The bottom line here is that I think faculty have to understand why a student may be plagiarizing and get at the root cause and address that,” Marcellus said. “If they’re intentionally cheating, then there have to be penalties. But the Internet changes the boundaries of ownership. And it knows few international boundaries, so it becomes more of a global issue.”

Cartoon by Mimianddiunice.com and used here with Creative Commons license.

Nicole Kraft spent 20 years as a journalist before becoming an assistant professor (clinical) of journalism at The Ohio State University. Her focus is on news writing and reporting, feature writing, social media, digital media creation, and media law and ethics. She was recently named a 2015 Apple Distinguished Educator and has recently published research on using iPads and iTunes U in journalism education.