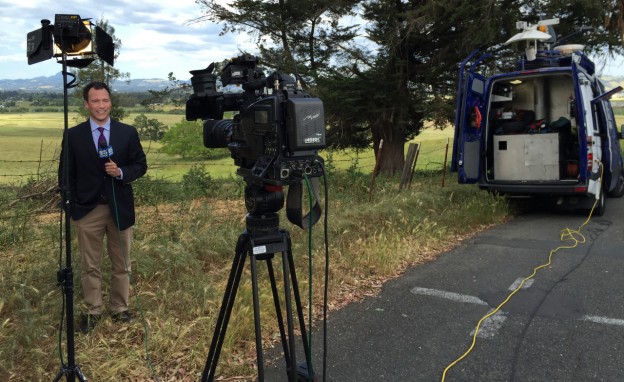 Everyone who teaches knows the idea of professors taking the summer “off” is fantasy. There’s plenty to do after classes are over. I choose to return to the newsroom I inhabited before I began teaching broadcast journalism in 2011 at the Newhouse School at Syracuse University.

In May, I worked as an MMJ (solo journalist, one-man band) reporting, shooting and editing stories for the dayside shows at KPIX, the CBS TV station in San Francisco. Because our students at Newhouse are also expected to report their stories on their own, the experience provided me with some insights I plan to bring back to the classroom this fall.

"There’s a wonderful calming effect of knowing you know what the heck you’re doing in the scramble up to show time."

Here’s what my two-week trip back to the newsroom taught (or reminded) me about teaching:

1. Get the technology down before doing the journalism.

KPIX had changed to a new non-linear editing software system since the last time I’d been back, so I was anxious about working on deadline with unfamiliar equipment. Because the antidote to anxiety is preparation, I downloaded more than a dozen YouTube videos on how to operate Edius software and practiced on borrowed computers in the days leading up to my start. That investment was well worth it, as there’s no time for learning as the clock ticks ever closer to your 5 p.m. live shot. That goes not only for the editing, but also for the camera, microphones, FTP procedure, everything. There’s a wonderful calming effect of knowing you know what the heck you’re doing in the scramble-up-to-show time.

So this fall, I’m going spend extra time making sure the students are well-versed in the technology they need to do their jobs. While that strategy will cut into their storytelling time, I hope it will also improve the quality of the stories they eventually do. For sure, it’ll make for less student frustration as the video they shoot and the audio they record will likely look and sound better. After all, the best interview you ever conducted didn’t happen if you don’t have audio.

2. Have empathy for students when I ask them to report TV stories on deadline.

This does not mean go easy on the students. Leading them to believe missing deadline is no big deal is doing them a disservice. No professional news director is going to let that slide, so they might as well get used to it in the classroom. Still, during my two weeks reporting, I was reminded how laborious it is to unload and pack up the tripod, camera, microphones, spare batteries, cables and other equipment before and after every single shoot. And then do it all again tomorrow. Beyond the physical stress, there’s also the mental fortitude required to overcome being told “no” all day long. Rare is the TV reporter’s day when only a handful of phone calls results in all the information needed for the day. Reporters have to buck up and keep their eyes on the goal: doing the best story possible before deadline.

So this fall, I’m going to work harder at making sure students understand the physical and mental challenges this job presents and tell them I really do understand what they’re going through. My standards will still be high, but more classroom conversation about what they can expect will perhaps help show them I get it and have their backs.

3. A good logistical plan can make the day much easier.

One of the biggest shocks of working as a reporter again in San Francisco was how much time I spent driving to stories. Some of that was traffic and some of it was simply how spread out story elements are in the Bay Area. But no matter how long it takes a reporter to get to the interview or the scene of the story, the deadline remains the same. You just have to do other stuff (shoot, interview, write, edit) faster. A good logistical plan can really save time, which means more time to complete your other assignments before deadline.

So this fall, I’m going to encourage students to think hard about the answers to questions such as:

Returning to the newsroom is a chance to get a close-up look at just what today’s reporters have to do before the on-TV part of the day happens. Some of the points mentioned here aren’t all that groundbreaking — they’ve been a part of what TV reporters have done for years. But sometimes it takes putting oneself in the middle of it all to be reminded just what it is we’re asking our students to do. It’s hard, but worthwhile. And with thought, it can be more fun and satisfying.