Meet the Inaugural Grantees of the Howard G. Buffett Fund for Women Journalists 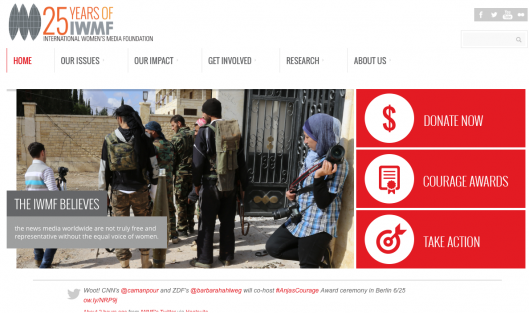 The International Women’s Media Foundation (IWMF) recently announced the inaugural group of grantees for its new Howard G. Buffett Fund for Women Journalists. Designed to empower female journalists around the world, the fund awarded grants to nine trailblazing women who were selected from a pool of 650 applicants representing projects in over 100 countries.

“We are in awe of the talent and diversity of ideas represented in the hundreds of applications we received from around the world for this Fund,” said Elisa Lees Muñoz, executive director of the IWMF, in a press release. “The strength of the proposals truly reflects the bold aspirations of women journalists.”

"We are in awe of the talent and diversity of ideas represented in the hundreds of applications we received from around the world for this Fund." -Elisa Lees Muñoz

With this new fund, the IWMF wanted to create an opportunity for women journalists “rooted in hope, strengthened by ambition, and represented by extraordinary projects that challenge traditional media narratives,” says Muñoz. The voice of women journalists matter, and this fund hopes to show that through positive, forward-looking opportunities.

The IWMF believes this fund will positively impact the state of the media, based on the encouraging response from applicants and the strength of their proposals. As Muñoz says, there are “thousands of women around the world eager to report and ready to clear any obstacle to that goal.” From field-based expertise to entrepreneurial innovation, the fund will support grantees as they expose underreported, yet critical, global issues and strengthen countless careers in the process.

Iris Kuo and Katie Orlinsky are two of the grantees. Photos from Twitter.

For the last 25 years, the IWMF has strengthened the role of women journalists by celebrating the courage of those who have overcome threats and oppression to report and bear witness to global issues. Through its grants and programs, the foundation empowers women journalists to become leaders in the industry with the training, opportunities, and support they need to succeed.

With help from the Howard G. Buffett Foundation, this new fund will award about $2.3 million over the next 10 years to grantees whose work demonstrates a commitment to transparency, democracy, and diversity across media platforms. Three additional rounds of funding will be completed this year, with a total of $230,000 awarded to applicants. Applicants must be female journalists working full-time for a specific media outlet or as freelancers. The next round will be open from June 15 to July 27, 2015. The application will be available here.

Priyanka Dubey will complete her book on the crisis of rape in India.

Rahima Gambo will pursue a multimedia web project about students in Northeastern Nigeria, who have been impacted by the Boko Haram insurgency.

Iris Kuo and her team will create a multimedia research tool and web app, LedBetter, to increase access to information on gender in corporate leadership.

Pascale Müller and her team will implement a skills-building workshop for female journalists in the Middle East and North Africa.

Tennessee Jane Watson and her team are awarded a grant of $36,000 to complete an audio documentary examining childhood sexual abuse in the United States.

Learn more about the inaugural grantees and the fund.