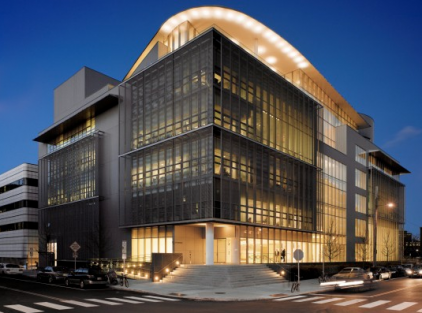 Matt Carroll at the MIT Media Lab, shown above, recently spoke to Jeff Jarvis about his views on where the news business is going (Photo provided by Matt Carroll)

The “Future of News” at the MIT Media Lab spoke recently to Jeff Jarvis, one of the top commentators on the world of journalism, about how the industry can transform itself by rethinking its core tenets: we are not in the content business, he argues, we are in the service business.

Between 2007 and 2014, Jarvis was named one of the world’s 100 media leaders by the World Economic Forum at Davos. The professor at CUNY directs the Tow-Knight Center for Entrepreneurial Journalism. He has written three books, the most recent of which is Geeks Bearing Gifts: Imagining New Futures for News.

"Journalists need to work and collaborate with the public and other members of the news ecosystem."

In his new book, Jarvis talks about the challenges facing the news industry, and also the tremendous opportunities for creating new and more robust avenues for serving the public.

Jarvis, who blogs at Buzzmachine, sees building relationships with people as individuals and communities as key to the survival of news organizations. He describes how those new relationships might look:

Journalism is in the relationship business, Jarvis argues, and that is key for survival.

Journalists must know people as individuals and as members of communities so they can serve them with more relevance, building greater value as a result. This “will be a necessity for media business models, a key to survival and success,” he writes.

Looking at people and communities as individuals can be a difficult concept for journalists who think of people as the “mass” in mass media. But it’s essential for change.

“If we provide users with better relevance and value, that will lead to better engagement, loyalty, usage, and attention,” he says.

Journalists should understand the needs of their readers and viewers, and how to meet those needs. “Heck, your local plumber knows more about you than your local paper probably does,” he said.

“Journalism has no end of new opportunities, and our problem is that we have not explored nearly enough of them,” Jarvis writes.

Forget about journalism as a content business, he says. It should be about service. Content fills something. Service accomplishes something. It must be about outcomes rather than products. Journalists must ask how they add value to inform a community.

Working to get more data from readers and viewers is perhaps a contrarian goal in the Edward Snowden era, but it’s a necessity, Jarvis says. And it’s not an impossible task. People routinely turn data over to companies. Consider Waze, he says: “I tell them where I live, where I work.”

“We need data to build value relationships,” he says. People are “having fits about privacy,” he acknowledges, but thinks it’s “possible for news organizations to build a relationship of trust, an exchange of value.”

Local news sites should know where their audience lives and what it cares about. And local news sites should be better at this than a giant, international company like Google. They should be able to help you find local places to eat and be entertained. Journalists need to better understand how to personalize the delivery of information.

Jarvis describes how one publisher spent enormous energy driving readers to his site. But a big percent of those readers came from outside his geographic area. What use were they to local advertisers? Not much. The publisher would have been more successful had he better targeted his market. It would have been much better for his business model, Jarvis says.

IT’S TIME TO TURN NEWS INTO A PLATFORM

News is a platform, Jarvis says, but news organizations have been slow to realize this and take advantage of their unique position. For instance, he notes, newspapers have had restaurant reviewers for decades. But it was others who built apps for finding and rating restaurants in the neighborhood.

“Look at all the platforms that now do restaurant reviews, and they are much more efficient than a restaurant critic,” Jarvis says.

It doesn’t mean that journalists have to build giant software applications. “A hashtag can be a platform,” he says. Newsrooms can use existing technology from wikis to databases to surveys, or work through social media companies such as Facebook and Twitter.

Journalism must have greater utility, he says. Journalists need to work and collaborate with the public and other members of the news ecosystem. Journalists also must move past articles, says Jarvis. Not that he wants to kill off articles — they are a great form that has been perfected over the past century.

But instead on a long string of text, why can’t the background paragraph be reduced to a link? Or a video? And there’s so much more that can be done with data, sets of information, curations, and creating conversations.

Also, don’t try to remake the wheel. If another site has better information, link to it. Don’t bother wasting time and resources recreating it. ‘Do what you do best and link to the rest’ is a popular Jarvis-ism that has become a shorthand way of saying: Stick with your expertise, and link to what others are good at.