How Technical.ly is Using Live Events to Build a Sustainable Business Model 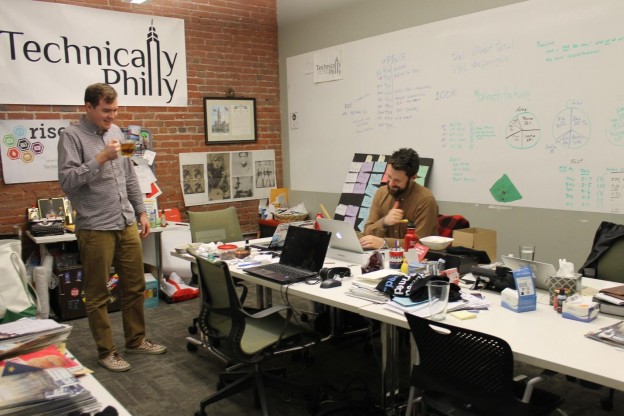 Chris Wink, Brian James Kirk, and Sean Blanda launched tech-centric online news outlet Technical.ly in 2009. For the recent graduates, it satisfied the modest goal of finding journalism jobs in the Philadelphia market. At the same time, it tracked a path forging a new media business model by way of community building.

“It was our goal from the beginning,” Wink said. “We’re not just going to report. We have a responsibility here. If the community fails, we’re also at fault.”

“People pay money to connect with each other.” - Michael Skoler

Dressed in khaki pants and checkered sneakers, the tall and athletic former high school basketball player smiles endearingly as he reminisces that a year after graduating with a political science degree from Temple University, he scraped together $16,000. Landscaping jobs during the day segued into serious evening discussions with his co-founders, two former Temple News buddies, on how to land journalism jobs in Philly. Kirk thought the tech community offered possibilities. At Kirk’s behest, the three of them attended events and soon discovered that “people were doing work of substance and that no one was talking about it.”

In 2011, after some freelance writing gigs, more landscaping, and a year-long stint with a homelessness advocacy nonprofit, Wink went full-time with Technical.ly’s predecessor, a WordPress-hosted blog site called Technically Philly. Two years later (without Blanda who left to pursue other ventures in June 2012, but still holds a small ownership stake), the site would be rebranded as Technical.ly and expand to Baltimore. Today, the site also serves Brooklyn, Delaware, and Washington, D.C.

But a business model based on building connections across a community requires that a community first exists. In 2009, there was little sense of community in Philly’s tech sector.

“It took off around 2010,” said Alex Urevick-Ackelsberg, founder of Philly-based web design and development company Zivtech, who’s worked in the city for nearly ten years. “There was community forming and it accelerated at a rate that it hadn’t before.”

Wink believes Technical.ly had a role in the tech scene’s rise.

“It helped make it more real by letting people know what others were doing and fostering healthy competition. It held the community to a standard that helped push it forward,” he said, sipping tea in the common space of a West Philly building they share with venture capital firm First Round Capital and other smaller, transient tech firms. A few feet away is Technical.ly’s main office—a conference-room size space behind glass doors that houses a large rectangular table that nearly fills the room, a white board, stacks of paper, a picture of Elvis Presley, a refrigerator stocked with beer, and a couple of bottles of whiskey on a small table. “It’s internet company casual meets newsroom mystique,” he said, explaining the whiskey.

Andrew Mendelson, associate dean and professor at CUNY Graduate School of Journalism in New York, was chair of Temple’s journalism department until December of last year. He watched Technical.ly start from scratch. “Their news is great, but it’s larger than that,” he said. “It’s connecting with like-minded people. People are willing to pay for that by way of events.

Mendelson points to the Texas Tribune as an example of a newsroom that has monetized a community’s engagement by charging for live events. In 2013, four years after its launch, the nonprofit Tribune raked in $5.1 million in revenue, 28 percent of which came from events, according to Digiday, a leading modern media publication that also describes itself as an events company.

As for Technical.ly, events accounted for 80 percent of revenues in 2012. Last year, that dropped to 60 percent—on revenues of $750,000. Wink and his co-founder would like to get the percentage down even further.

Philly Tech Week, in its fifth year, continues to be the biggest revenue generator and has grown so big that Comcast signed on as name sponsor. This year’s expected attendance of 25,000 is six times what it was at the first event in 2011.

Is it too early for a #PTW15 #tbt? @DMDPhilly at Arcade @ Dilworth pic.twitter.com/YXx5ynQLxT

Other events, many of which are free, include monthly stakeholder breakfasts; Baltimore Innovation Week, which will take place for the fourth time this fall; and the NET/WORK job fair, which occurs in four of Technical.ly’s five cities and recently attracted nearly 500 applicants in Philly.

“You bring together a community by connecting with people who are like you,” said Michael Skoler, vice president of interactive media for Public Radio International. “Then you listen. You understand their needs and offer them services that satisfy their needs.”

As a 2009-2010 Reynolds Fellow at the Reynolds Journalism Institute at the Missouri School of Journalism, Skoler researched new business models for journalism and looked at how building community offers new possibilities for journalism’s future.

It’s a conversation that academics and journalists have been having ever since the Internet, Craigslist, and free online classified ads shattered the industry’s advertiser-driven revenue model. Media companies and news organizations have been trying to replace the lost revenue stream ever since.

Skoler argued against the paywall model, a system that prevents readers from accessing content without a paid subscription. He advocates for creating community and then adding on services that are profit-making.

“People pay money to connect with each other,” he said, explaining that often it is as much about who else is attending the event as it is about what content will be delivered from the podium.

Evan Smith, CEO, editor-of-chief, and co-founder of the Tribune, told Harvard University’s Neiman Lab, “We are getting traction in this idea that events are content in the same way traditional journalism is content.”

It is a subtle, yet important, distinction.

Austin Morris, Jr., of Morris Risk Management, a firm that specializes in cyber insurance, has been following Technical.ly since 2010, one-year post-launch.

“I think that Technical.ly has been a great connector,” he said and explained that when he first came across the site it was in part because of events. Morris attended the monthly gatherings that took place at different company locations. He went to “hear the topic, but also to meet someone in the tech community.

“I have made a lot of my friends in the tech community at events sponsored by Techical.ly,” Morris said.

Brad Denenberg is founder and director of Seed Philly, an incubator for high-tech scalable software companies, as well as founder of Decibly, an in-venue mobile fan engagement platform.

He’s followed Technical.ly since the beginning.

“It has been a big part of getting the city and the universities to pay attention to the tech and startup community,” he said.

But Denenberg has recognized an uptick in events-driven advertising on the site, something he feels eats away at Technical.ly’s credibility. He would like Technical.ly to offer more in-depth reporting.

Skoler says the challenge of the model is recognizing and solving a community’s needs. In Technical.ly’s case, that means figuring out if more in-depth reporting is needed.

Wink describes the Philly tech community as a community that has talent and is serious. It is also one that covets continued growth. “We don’t have the startup that my neighbors know about,” he said. “There’s not a Groupon or a Snapchat, so that people not in tech can see that tech is happening here.”

Wink wants to be part of the tech community’s future.

“We’ve helped accelerate this community,” he said. “But there’s more. I don’t want to last for lasting’s sake. I want us to last as long as we’re helpful.”

Key to helping will be listening, understanding, and then delivering the kinds of services, content, and events that will propel the community forward. Charging for it will ensure that Technical.ly stays around.

In the end, Skoler believes a model founded on community building is sustainable and won’t destroy the profession, as some journalists believe.

“It strengthens journalism,” he said. “It will make it more meaningful.”

Pina Rahill is a freelance writer whose work has appeared in Scholastic Parent & Child and Exceptional Parent, as well as in local publications Suburban Life, MetroKids and Parents Express. She is mid-way through a Masters of Journalism degree at Temple University. She has also worked in the IT profession for over 25 years and is currently consulting at Shire Pharmaceuticals. She lives just outside of Philadelphia with her husband and five children.