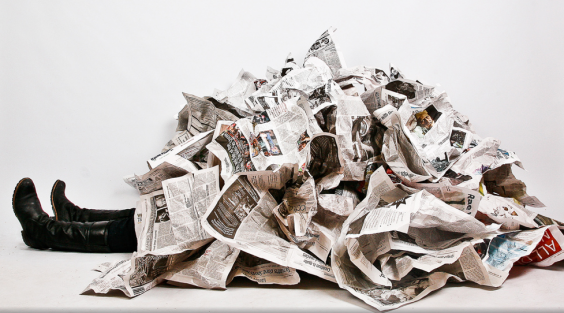 Journalism has always been obsessed with perfection. The story will be dead to rights, if the copy desk uses a semi-colon instead of an em-dash. If a headline’s wrong, there will be hell to pay come the news meeting tomorrow morning.

There is nothing wrong with this. In fact, it’s fantastic. Papers of record should, and must, be held to the most stringent and reliable quality. My issue is when this mentality of perfection crawls from the editor’s desk to the business desk and the production line.

Newspapers have always had one product: the paper itself. At most there may be a Sunday fashion insert or a Thursday real estate section, but for all intents and purposes the paper – dried ink on tree pulp – was all there was. This is not even remotely close to being true anymore. It hasn’t even been true for the better part of the last generation.

To put it bluntly: almost every news organization in the world has failed miserably at juggling this, much less monetizing it.

There are many reasons for this, and there could be (and have been) volumes of books written on the topic. My thoughts are simpler though: news organizations are like a 14-year-old boy trying to work up the nerve to ask a girl to the freshman homecoming dance. They’re so afraid to fail they don’t even try.

The mentality that unless the product is perfect it shouldn’t even be seen by the general public is especially dangerous when dealing with a medium as transient and ineffable as digital distribution.

Ironically, the tech world also had this problem for a very long time. For the first 95 years of the 20th century, computers were expensive, and software was difficult to distribute and almost impossible to update once put out into the world. In essence, many of the same problems that newspapers face, and it unsurprisingly led to the same outcomes.

Software companies spent years and millions of dollars to make sure that the software, once it reached “gold master” status, was as close to perfect as you could get. The result was, for the most part, a slow trod of previously proven ideas with very little change or creativity.

Then the Internet and high-speed broadband happened. All of a sudden software could be updated instantaneously, in small increments, often without the user even having to be aware of the fixes or seeing the problems in the first place. The mentality that to ship software it should be perfect became anathema.

Facebook’s motto is famously “move fast and break stuff.” The reason they can do this is because they know that if a new feature isn’t working, or isn’t connecting with the end user, they can pull it. This allows cheap experiments in UI, content delivery and anything else they can imagine to be created quickly, released while good enough(-ish), and feedback to be gathered immediately.

Innovation in the Newsroom

Newspapers are very often “highest blade of grass” organizations. Crazy or off-kilter ideas are cut down. Don’t shake the boat or else you might be the one tossed overboard. What editors, producers and publishers need to realize is that two or three employees, working over a three-day hiatus, can realize these small, crazy ideas. With this sort of turnaround, new methods of production, distribution and content delivery can be built, launched and tested in six weeks, not two years as it often would have taken in the dead-tree days.

Newspapers should take a lesson from the tech world. Set up small groups; give them the freedom to try out the weird stuff. Don’t micromanage or expect amazing and immediate results; they won’t be there. Don’t punish if an idea or project fails; they will. Instead, revel in the fact that your organization is finally trying something new, and then wait for the day when one of those left-field ideas finally hits.

Christopher Guess (@cguess) is a Knight International Journalism Fellow who works with a network of media organizations and investigative reporting centers in Eastern Europe and Eurasia to develop long-term sustainability plans and improve management practices.