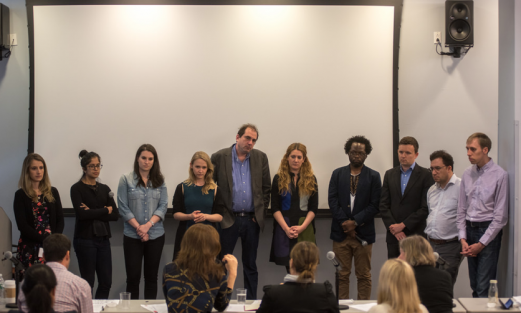 I started the year with a problem: small news organizations don’t have enough time to keep their digital publishing and ad sales practices up to date. This is how I started to develop a solution.

"Small newsrooms have a lot of potential, a lot of needs, and not many resources. I had to start something that would be of immediate use. and I had just a few months."

The problem I wanted to work on came from personal experience. I had worked at a small newsroom where I was unhappy with the workflow of the content management system. It took too long to write posts, and they weren’t flexible to host different types of multimedia content. I also saw that the publisher wasn’t able to take advantage of a lot of advertiser opportunities on its website.

Small newsrooms have a lot of potential, a lot of needs, and not many resources. I had to start something that would be of immediate use, and I had just a few months. My initial thought was that I would help small publishers stay up to date on new digital publishing software and multimedia reporting tools. Three months later, my project has ended up in a different place — a series of interactive tutorials to help small newsrooms grow their digital ad revenue. This is a look back at how I got here.

The Market: What’s Going On With Small Newsrooms?

Key findings from “The Goat Must Be Fed: Why Digital Tools Are Missing in Most Newsrooms” By Mark Stencel, Bill Adair, and Prashanth Kamalakanthan

1. Small staffs, limited time
According to a 2014 report from the Duke Reporters’ Lab, about half of all newsrooms in the US have a circulation of under 10,000. Of those publishers, the average number of employees is less than 10. With small staffs, a problem for these newsrooms is that most time ends up devoted to editorial tasks with little left over for keeping up with new developments in publishing. A PEW report found that more than half of nonprofit newsrooms–many non-profit newsrooms are small newsrooms–don’t have enough time to work on upgrades. [Since reading this, in my own research, I’ve found that, despite limited time, there are many publishers who are quite sophisticated about digital publishing.]

2. Constantly changing tools and best practices
The pace of change is quite fast for the digital publishing landscape. Rahul Chopra, Storyful’s CEO, said in a presentation this spring that he upped the frequency of strategy review at his social news surfacing and verification company to once every three months because the digital news landscape was changing so frequently.

Zach Seward, Quartz’s VP of product and executive editor, made a similar point. In a talk at CUNY, Seward said that Quartz keeps a one to two month horizon on where their new products are going. Quartz has a general strategy that they reframe frequently around new developments in social media and other platforms.

3. Software integration
For a small newsroom, using an overarching, enterprise-priced content management system is not an option. They have to piece together the suite of software they use for publishing articles, multimedia, and advertisements on their websites. And they have to be ready to react to changes in the how their audiences consume news as they go from e-mail newsletters to the Facebook stream to YouTube. Some newsrooms are making it work, but a lot of them are struggling to keep up.

4. Getting local businesses online
A publisher can have the most awesome news site online, but it won’t help their revenue unless they can convince businesses to advertise there. Many of the small publishers that I interviewed were having trouble making the value of advertising online tangible to the local businesses in their communities. Local business owners like to be able to go to their local newsstand and see the advertisement they paid for. The news organizations that did convince businesses to advertise online had easy-to-use monthly ad packages and sent the businesses screenshots of their advertisements on the news site.

The needs of small newsrooms and news startups

My plan was to connect newsrooms with a suite of software-as-a-service to make it easier for newsrooms to publish a lot of great looking and shareable content quickly, whether they are writing from the office or reporting on an event from their phones.

At the start of the Tow-Knight program, I called a lot of small newsrooms and community news organization–many introduced to me by the Center for Community and Ethnic Media–to get a sense of what their needs were. More than I had expected, the newsrooms varied in the degrees to which they had developed their online presences.

Jeff Jarvis lists the steps for online growth as such: first, content; then, audience; and, finally, revenue. These publishers were at very different places on that spectrum. Some were more tuned to getting their contributors going; some didn’t have advertisers at all. Some had good digital sites going, and their advertisers weren’t interested or didn’t know how to take advantage of advertising online. It became clear that they were facing a lot of different problems.

When it is working, the formula is a mix of low-cost software (like WordPress and Google Analytics, which are free, and PassionFruit Ads, which is less than $100 a year), a niche audience, and a deep and guiding relationship with local advertisers. Both Bushwick Daily, a site about the community and events in Bushwick, Brooklyn, and Hyperallergic and their Nectar Ads vertical ad network, devoted to art and culture, have built up growth this way.

I also received a lot of feedback from my peers in the Tow-Knight program. I gave my colleagues a card sorting exercise and asked them to rank the features that they most wanted help with on their publishing projects. I was surprised to find that “analytics” kept coming up as the number one interest. They wanted to know who was visiting their sites and why.

When Kabir Ahuja from McKinsey visited our class, he brought up an interesting shortcoming around analytics. Ahuja said there was no universal language for publishers to use to share their audiences with advertisers.

Publishers need to be able to tell their advertisers what is distinct about their audience. They essentially need to prove to them that what they see online is the same as what is happening in print. Advertisers like to see the local publications in the neighborhoods that their business is in. It makes them feel that their advertising efforts are tangible. The more I heard from local publishers, one of their biggest challenges was making online advertising tangible and fun for local publishers.

I found examples from the Texas Tribune of a very detailed media kit. They had information collected from reader surveys that showed what percent of their readers had voted in the last election and what percent were earning different amounts of money.

When I interviewed publishers, they said that they mainly got information about new developments in digital from events and from reading Nieman Lab, etc. These resources talk a lot about trends in the industry. They don’t really go into detail about best practices and how to apply them. I looked at the resources available for the many small publishers and them lacking. For example, a Poynter Institute course that taught sales techniques you would need a sales team to implement. Unfortunately, a lot of small publishers don’t even have a single dedicated sales person.

Newsrooms are combining networks content management systems, analytic tools, ad networks, and ad exchanges. Making these systems talk to each other has to be explained with training that is modular, too.

My value proposition for the tutorials was this: a convenient way to learn and implement best practices; a design that is clear and easy to use; reduces the cost of acquiring new advertising clients; and reduces the risk of choosing the wrong software or revenue model.

The training that I started with was how to install Google Analytics in WordPress. Sitting round in the Tow-Knight center classroom, there were frequent grunts of frustration from other fellows as they set up their WordPress pages. I started there because I knew that I could get a lot of feedback about my tutorial from people working with WordPress. I went through and tried to make step-by-step instructions with screenshots for installing this.

Screenshot of a first draft of a tutorial script.

It turned out to take quite a while because there were so many small steps, menus, check boxes, and keycodes to work with. I produced a long and detailed guide with screenshots. And this was just to install analytics in one type of content management system. Luckily, I was able to get feedback on this first prototype from a few Tow-Knight peers (thanks Keng, Kim, Phillip, Rebecca, and Sneha).

One challenge in designing these tutorials is to make them specific enough to be effective and broad enough to be useful to a range of newsrooms. To address this problem, I’m using the principles of design thinking to repeatedly test and improve the tutorials with a pilot group of newsrooms until the lessons prove to be completely reliable.

I presented my project to a panel of people from the media and startup world and at the Tow-Knight Demo Night. It was great to hear support for this idea from people at media organizations that want to support small news organizations.

Newsroom Tool Kit is currently a series of tutorials. It can become a project to collect, share, develop, and help implement best practices to growing digital revenue for small publishers. The most important thing is to make sure that local new organizations are able to continue to serve their communities (check out the award winning working of The Daily Breeze and Willamette Week.)

I’m excited to continue to speak with a lot of small publishers over the summer and develop this project even more (and do some freelancing as well). Please get in touch to tell me about your small news organization or share your thoughts on digital revenue for small publishers via e-mail or Twitter.

Matt MacVey (@HeavyTracking) just completed the Tow-Knight Entrepreneurial Journalism fellowship and is working as a media consultant, investigative reporter and video journalist. He is finishing up a masters at the CUNY Graduate School of Journalism, where he has focused on filming and editing video for the web, investigative data reporting with SQL and Excel, and reporting on race, tech employment, business and the economy. Before journalism, Matt worked on videos and interactives in the exhibitions department at the American Museum of Natural History and helped artists and filmmakers with grant applications and crowdfunding. He is trying to learn more about design thinking, virtual reality and the importance of local news to democracy. Matt lives in Upper Manhattan and is always on the lookout for a good cup of coffee.

Another version of this piece appeared on MacVey’s personal blog.