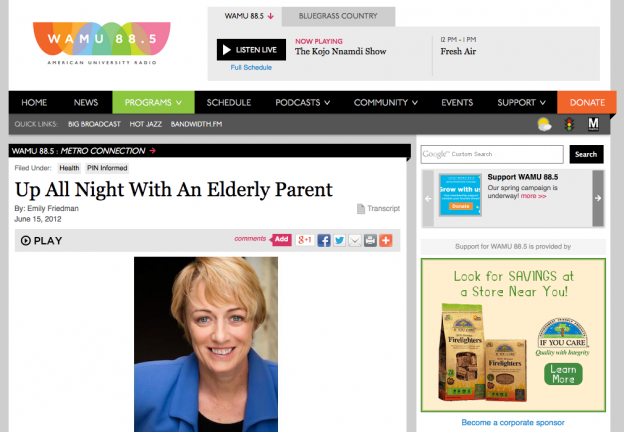 Jane Beard was one of the first to respond to an email from a producer at WAMU 88.5 FM that included a Public Insight Network questionnaire asking, “What keeps you up all night?” and this is the story that resulted.

In May 2012, Jane Beard was caring for her ailing 88-year-old father at her home in Silver Spring, Maryland. Her dad was a veteran of World War II, and he was suffering from dementia. At night, he would have nightmares about his service in Europe nearly 70 years prior. He would often cry out, waking Jane and her husband, Jeffrey B. Davis. Jane would comfort her dad, though he wouldn’t recognize her or remember the episode the next morning.

Jane and Jeff were fortunate to have help caring for him during the day. But that didn’t make the nights any easier. Jane says she often lay awake at night wondering, “Why is this so hard? What is wrong with me that this is so hard?”

"This is what engagement is all about: asking key questions to better understand what is most important to all segments of our communities."
ADVERTISEMENT

In the midst of her caregiving, Jane received an email from a producer at WAMU 88.5 FM, the NPR member station in Washington, D.C. The staff of the station’s local news magazine program, “Metro Connection,” was working on a show with the theme of “Up All Night.” The email included a link to a Public Insight Network questionnaire asking, “What keeps you up all night?”

The producers had sent the email query to hundreds of people, and Jane was one of the first to respond. I was working at WAMU at the time, and I was the first to read her submission. It was raw, honest, and insightful.

“With kids, you expect them to grow out of [nightmares] and sleep through eventually,” she wrote. “I have come to expect the opposite with Dad – that it will get worse until it goes silent. And that will bring a different version of sleepless nights, I guess.”

WAMU reporter Emily Berman worked with Jane to record an audio diary, which aired on Metro Connection in June 2012. The story received a tremendous response in and out of the newsroom.  It prompted many follow-up pieces, and ultimately a public forum focused on the personal and economic impacts of family caregiving. It pushed us to consider experiences that are common, profound, and yet unfamiliar to a newsroom staffed primarily by young reporters.

This is what engagement is all about: asking key questions to better understand what is most important to all segments of our communities, identifying stories that need to be told, and inviting individuals who are most deeply affected to share their personal experiences. This makes news coverage more relevant, compelling, and inclusive. It is essential if newsrooms are going to maintain or even expand their audiences.

I now direct the Public Insight Network Bureau at Arizona State University’s Walter Cronkite School of Journalism and Mass Communication. The PIN Bureau is a partnership between the Cronkite School and American Public Media, with support from the John S. and James L. Knight Foundation, the Corporation for Public Broadcasting, and APM.

Students in the PIN Bureau collaborate with journalists across the country to engage communities and deepen reporting. They use APM’s Public Insight Network and a variety of other digital tools to ask questions that get to the heart of what is important to people.

Since the PIN Bureau launched in January 2014, we have worked with about two dozen newsrooms across the country, including CNBC, Colorado Public Radio, and The Center for Public Integrity.  We have tried many different approaches to engagement, and we have learned a lot about what works and what doesn’t work.

I look forward to sharing the most successful strategies for audience and community engagement in a DigitalEd training at 10 am PT / 1 pm ET on May 19, 2015.

I’ll cover ways to engage audiences and communities before, during, and after a story runs, and I’ll discuss how to measure the impact of engagement efforts.  I’ll also identify challenges journalists often face in engagement work and offer resources for addressing them.

To help make the DigitalEd training as valuable as possible, please engage with us ahead of time. Click here to share your experience, questions and suggestions. You can also reach me directly at [email protected].