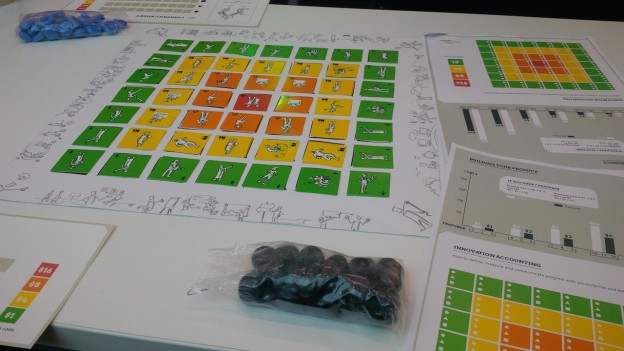 Playing Lean, a board game based on "Lean Startup." Photo by Tristan Stewart-Robertson

MediaShift produced its first-ever Journalism Innovation Summit and its first European event in London last week taking on the twin challenges of content and business models.

Delegates came from as far away as South Korea and Canada, across the United Kingdom, Norway, Nigeria and beyond.

"We need to take a multidisciplinary approach to this. How do we develop a business model that is not based on mass clicks?" -Lyra McKee

Hosted by City University London, and with receptions hosted by BBC News Labs, Wayra and Bloomberg, the aim of the event was to bring people together to talk about solutions rather than complain about problems, said MediaShift’s Mark Glaser.

“I think the word ‘innovation’ is doing something really new — what makes you uncomfortable, pushing your limits and the limits of your organization,” Glaser said during welcoming remarks.

Playing a Board Game

As an attendee, the epitome of this was the final break-out session spent playing a board game, “Playing Lean,” based on the “Lean Startup” method, and run by Tore Rasmussen. Journalists are not typically taught business skills and rarely see the financial pros and cons of the profession during a typical day. But the game looks at the cycle of brainstorming new ideas, testing them and making something successful in the eyes of the public.

“You have to get real information from real customers before you run out of money or motivation,” Rasmussen said. “You want to put the least amount of time into building something that will give real feedback with real customers.”

There are more than half a million Lean Startup followers, he said, and the conference was a first trial of the game in London, albeit limited to less than an hour where normally it would involve a full day or weekend.

Just as the idea of mixing journalism and business startups can take some getting used to, the afternoon focus on potential successful models for journalism was full of disagreement and diversity. Some said native advertising will flourish while others dismissed it out of hand. Same for crowdfunding.

Belfast-based investigative journalist Lyra McKee has made a success of crowdfunding her work, saying it can help people to “pursue their art.”

“The paywall was a panic move,” she said. “We need to take a multidisciplinary approach to this. How do we develop a business model that is not based on mass clicks? “It’s like being an actor — you’re living project to project.”

Seung-yoon Lee, whose Byline crowdfunding startup launched in beta earlier this year, countered that he didn’t think traditional crowdfunding worked and Byline wants to be a crowdfunding media outlet, allowing readers to support projects or columns.

“For crowdfunding, you have to be as biased as you can,” he said. “I think the model for Kickstarter is not suitable for crowdfunding — you don’t see any of their [an author’s] work in advance. “Maybe there needs to be different crowdfunding for journalism than Kickstarter.”

In another direction, Matt McAlister, co-founder of The Guardian’s Contributoria, puts more control in the hands of the community to commission stories, to “hand over the reigns to a community of people.”

“We wanted to slow the pace down,” McAlister said. “To get good long-form pieces, we needed to impose a pace to it.”

Various media outlets, including MediaShift, The Guardian and The Atlantic are media partners in the idea. Big media are also involved in Newzulu, which Alex Hartman explained pulls together content from eyewitnesses around the globe and verifies the content before putting it out to journalism organizations to use.

“I don’t believe giving things away for free is a business model,” Hartman said. “People want the breaking news they used to read in newspapers.”

And while Periscope has become a popular new favorite toy for journalists in recent weeks, it doesn’t help you make money, Hartman said. Newzulu is looking at live-streaming, but with a delay in case of sensitive content.

McAlister admitted that the media was “so far from cracking” a solution and Lee noted that journalists were not as good marketeers.

The role of Native advertising

Afternoon keynote speaker Jennifer Schwanenberg, innovation manager of the German Press Agency (DPA), made extensive use of Snow White imagery to illustrate her talk, saying that she represented content that everyone else wants — but that should be valued more highly.

She went through the different business models currently in use around the globe, from license fee to pay-per-view to crowdfunding and native advertising and affiliate marketing.

In particular she emphasized that media organizations didn’t need to be afraid about native advertising if they were honest and upfront about it.

“Maybe we are a bit crazy about saving our audience because as they grow in the digital age, maybe they get educated about it,” she said. “Media is waiting for their Prince Charming to come. This is so not going to happen. You just have to show your readers where the apple is grown.

“If Disney princesses can evolve, then journalism can too. We have to be cocky about our content and arrogant to the marketeers.”

The media industry is waiting for the prince to come and this is not going to happen, says @JSchwanenberg #jislondon pic.twitter.com/ESOCZth0YD

The possibilities of new types of content consumed the morning of the summit, which used the Twitter hashtag #jislondon throughout the sessions.

Chris Hamilton, social media editor at the BBC, said media organizations needed to equip themselves for the “hunt for new audiences.”

“We are living in the most exciting time for journalism since the invention of TV,” he said.

The BBC is one of the first outlets to partner with Facebook but has also experimented with a number of other formats, including:

Hamilton admitted they had to be careful about dumbing down content, but that has been a factor in news for centuries.

“We can still tell those stories as long as it’s about the content, not the format,” he said. “I’m pretty optimistic.”

In his opening remarks, MediaShift’s Glaser said his goal was to bring together a diverse group of people. Given the range of ideas and a lack of a singular successful idea to “crack” the future of reporting, the first Journalism Innovation Summit achieved a discomfort to keep that diverse group thinking and experimenting.