Meet the New Class of Stanford Knight Fellows for 2015-16 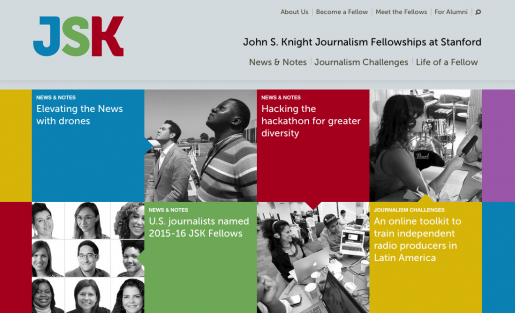 Twelve U.S., as well as eight international, journalists have been awarded fellowships to pursue proposals for journalism innovation during the 2015-16 academic year.

How do we engage Brazil’s emerging middle class? Can we leverage technology to empower women in newsrooms? What can we do to support the growing field of professional media freelancers?

These are just a few of the questions the newest cohort of fellows hopes to address as part of Stanford University’s John S. Knight Journalism Fellowship program. Twelve U.S. and eight international journalists have been awarded JSK Fellowships to pursue proposals for journalism innovation during the 2015-16 academic year.

“We expect that they will accomplish a lot during their year at Stanford and for years to come after that.” -James Bettinger

Now in its 50th year, the JSK Fellowship program supports innovation, entrepreneurship, and leadership in journalism by helping fellows address their “journalism challenges.” Each year, it gives 20 individuals from around the world the resources to test their ideas for improving the quality of news and information reaching the public. Fellows advance these ideas not only through collaboration with each other, but also with Stanford faculty, students, and the Silicon Valley community.

“We’re excited by the wide range of backgrounds and expertise that this group of fellows represents — from established newspapers and broadcast networks like the Washington Post and Southern California Public Radio to newer ventures like Vox and Re/code,” said JSK Fellowships Director James Bettinger in a press release. “We expect that they will accomplish a lot during their year at Stanford and for years to come after that.”

The new U.S. and international fellows, as well as their ‘journalism challenges,’ are listed below.

Susan Cagle, independent reporter and illustrator, Oakland, Calif.
How can we better support the growing field of professional media freelancers?

Jenée Desmond-Harris, staff writer, Vox.com, Washington, D.C.
How can we translate academic insights about race and racism into conversation-changing journalism?

Liz Gannes, senior editor, Re/code, San Francisco, Calif.
How can we create a location-based platform for distributing news, tying stories to where they took place?

Aaron Glantz, veterans reporter, The Center for Investigative Reporting, Emeryville, Calif.
How can we develop a new strategy to engage newsrooms in exposing the effects of war on the home front?

Tracie Powell, founder and editor, All Digitocracy, Washington, D.C.
How can we make newsrooms more diverse and connect with increasingly diverse audiences?

Astrid Maier, chief technology correspondent, manager magazin, Hamburg, Germany
How can we use technology to empower women in newsrooms to take on leadership positions?

Jacqueline Park, executive director, The Walkley Foundation, Sydney, Australia
How can we create a program specifically tailored to journalists and media in Australia to encourage investment in new media and embed innovation in journalism?