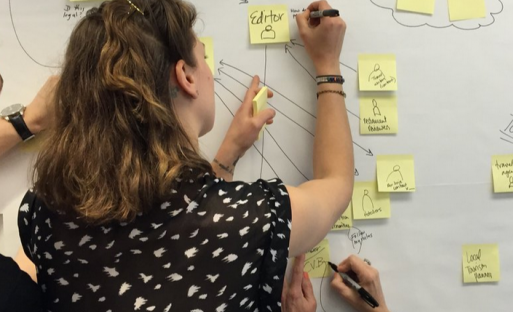 The John S. and James L. Knight Foundation recently announced funding for 20 new projects through its Knight Prototype Fund, which helps media makers, technologists, and tinkerers alike take ideas from concept to demo. Innovators are given $35,000 grants–and six months–to research, test, and iterate before building out a complete project.

Launched in 2012, the Prototype Fund allocates grants each quarter and provides teams with training in human-centered design and support from Impact Lab. Teams use this experience to better develop their projects and gather six months later for a demo day to share their discoveries and prototypes.

Chris Barr, the Knight Foundation director for media innovation, runs the Prototype Fund. He hopes it will spark further experimentation in both the media and public information fields.

“We started it as a way to quickly test and learn from new projects,” he said. “It’s a different model than most philanthropic funds; it’s more in line with the pace of innovation happening on the Internet and with new digital technology. We’re interested in how we can help people with research and development as well as sharing the learning and outcomes from that learning and development.”

Foia Machine, a past Prototype grantee

Previous Prototype grantees include Foia Machine and StoryCorps. The former is an open-source platform that empowers citizens and journalists to easily prepare, file, and track multiple public records requests to various governmental and public agencies worldwide. Initially funded by Knight, Foia Machine went on to receive additional funding through a successful Kickstarter campaign. The latter used its grant to build a prototype mobile app that allows people to record, upload, and share do-it-yourself StoryCorps interviews. StoryCorps recently won the $1 million TED Prize and used the award to fund and launch a new and improved version of this app.

Compared with previous years, the Prototype Fund has become more structured and the application pool much larger, leading to an improvement in the quality of projects. The latest batch of winners features a diverse range of ideas from a platform bringing together journalism and gaming to get audiences to interact with stories to a solution that addresses the cyberbullying of women bloggers. Barr noted that, with several projects attempting to tackle the same problem, it will be interesting to observe and compare how the different approaches work.

“We’re looking for any sort of project that’s going to create new pathways for information to get to people,” he said.

The next deadline for prototype applications is today, May 15, 2015. Apply now.

Ballot by WeVote (Project Lead: Amy Chiou; Charlotte, N.C.): Making voting easy by matching voters with candidates who share their political views through a free Web and mobile app that provides simple quizzes and surveys and uses a matching algorithm to sort candidates by compatibility.

KLRN Virtual Classroom by Alamo Public Telecommunications Council (Project lead: Katrina Kehoe; San Antonio, Texas): Using PBS LearningMedia and the OVEE video platform to support students who are homeschooled through a virtual classroom experience that allows them to interact with their peers online and take advantage of PBS educational resources.

Metadata Beyond the Open Graph by Contextly (Project lead: Ryan Singel; San Francisco): Developing a new kind of writing interface that helps journalists and others create stories that include additional context and descriptive metadata, so they can be found and used more easily.

Neighborhood Drawing Tool by the Metropolitan Area Planning Council (Project lead: Jessie Partridge; Boston): Helping activists, planners, students, and others find information and crowdsource popular knowledge about their neighborhoods through a tool that allows them to aggregate data based on their own definition of neighborhood boundaries.

Playable Stories by Arizona State University New Media Innovation Lab and Center for Games and Impact (Project leads: Retha Hill, Juli James and Adam Ingram-Goble) (Tempe, Ariz.): Enabling journalists to produce interactive, mobile-ready news experiences, based on the principles of gaming and journalism, in a WordPress plugin and theme; for example, audiences will be able to interact with stories to choose sides, make decisions and see the outcomes.

Railroad Project (Project lead: Seth Forsgren; Miami Beach, Fla.): Allowing journalists, governments and the public to foster two-way communications with their audiences, through a video messaging tool that captures both sides of a conversation.

The Ripple Mapping Tool by Allied Media Projects (Project lead: Jenny Lee; Detroit): Allowing social good organizations and others to measure the outcomes of a particular event through a tool that collects information from participants on what they did or did not learn, whom they met and what, if anything, grew from the experience.

Semantic Timeline Maker by The Lens (Project lead: Abe Handler; New Orleans): Helping make sense of large amounts of data, such as emails and news articles, via a program that extracts structured facts from free text.

Unveillance (Project lead: Harlo Holmes; New York): Enabling journalists and others to uncover answers and explore data sets through a friend-to-friend file-sharing platform in which users can “drop” documents into a folder and have them quickly analyzed and explored.