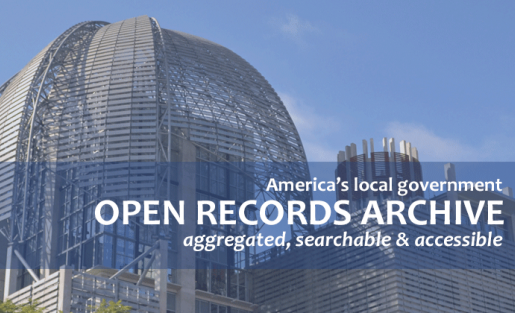 How would you use the CivicArchive – an open, aggregated, searchable, and accessible national collection of municipal records?

In 2013, with support from the John S. and James L. Knight Foundation Prototype Fund, we set out to prove that one could alert people when local government mentioned keywords of interest in their agendas, minutes, and related documents. We proved that indeed this could be done and delivered the prototype. Should it be done as a stand-alone business is a question we were curious to answer.

"We learned that what users actually need, rather than the alerts alone, is more curated content or, content that has been boiled down to the bare essentials in a simple, readable format."

Since that time, we determined that building an open, aggregated, and searchable collection of local government records will fit the needs of many individuals and organizations in the civic space, including our own and as described below. These records would originate from all counties, cities, school and other special districts, and related agencies. The entire collection would be open to anyone to search and use, and records could be downloaded on a small or widespread basis.

Launching a Business on a Mission

Our original hypothesis had been, once we finished the prototype and launched an alerting service, that we would start gaining subscribers, which would generate enough revenue to bootstrap the fledgling company, without the need for outside financial support.

Today, we’re intent on building CivicArchive as a robust, socially-conscious, and sustainable for-profit business. Just like any other user, we’ll use records collected from the open CivicArchive and develop information products we determine are viable through a validation-innovation cycle. We’ll use a combination of seed capital, revenues, and traditional venture capital fundraising to grow the business.

We’re also intent on using our resources to lead the development of the CivicArchive within the open community and return dividends for years to come. Our social mission purpose is to support programs that get these development tools and information resources into the hands of entrepreneurs and other civic stakeholders who may not originate from, but are definitely focused on addressing the civic engagement appetites of underserved populations. By getting on our feet first, we’ll be able to multiply our effects long-term through other individuals and organizations.

We conducted quite a bit of user interviews, testing, and market research. Although alerts have been an interesting concept, issues surfaced. For instance, beta users were creating generalized alerts and we were sending links to dozens of documents containing their keywords and phrases – several times per week. That proved impractical as it became too much of a burden for the user to slog through the records, even though we filtered them down.

We learned that what users actually need, rather than the alerts alone, is more curated content or, content that has been boiled down to the bare essentials in a simple, readable format.

Every sector we’ve identified and interviewed users from – financial, procurement, planning, media, advocacy, internal government – have widely-varying needs but needs that could be satisfied with information found in these meeting and other records. The foundation of these needs is a complete, organized library of records.

In the past, I believe we tried validating the concept and product market fit in too small of a marketplace– one major city and county in Southern California. The users who expressed the greatest level of interest in the curation and alerting services have been the ones who serve regional or national constituents and are typically headquartered outside our area.

If you know search, you know it’s a tough business. Making sense of what’s in the records programmatically is challenging but not impossible. The amount and quality of accessible information is limited by the methods and technology used to publish the document. That being said, the key thing is that we have possession of the primary source documents we glean directly from the municipality’s site or via public records requests. With those in hand, and as technologies improve, we’ll be able to revisit the records, reanalyze them, and improve the accessibility over time.

My personal interests in open government are a result of many frustrations dealing with my city and state governments. I’ve worked for years advocating public safety-related issues, largely around drunk driving and responsible beverage service, and have come to believe that if an issue isn’t sexy at city hall or in state offices, good luck. It’s especially discouraging to be looked right through by leaders without monster organizations or large crowds of voters in tow. They seem expert at working to appease squeakier wheel advocates, regardless of the subject matter. Discouraging as it has been, it has also motivated me to help people become more informed and engaged. I strongly believe that people, if properly informed, will engage but only if they feel they will be heard and that their interests will be acted upon fairly.

Our proposition is to continue developing CivicArchive.com on a national scale. We are currently validating some assumptions, and it would be great to hear from you about your needs. If you want to help, consider taking this four-question brief survey?

Jerry Hall (@CivArchive) is a civic technologist focused on opening local government records, and helping make sense of them as an open, aggregated & searchable collection at CivicArchive.com