What if Teaching Started with the ‘Why’? 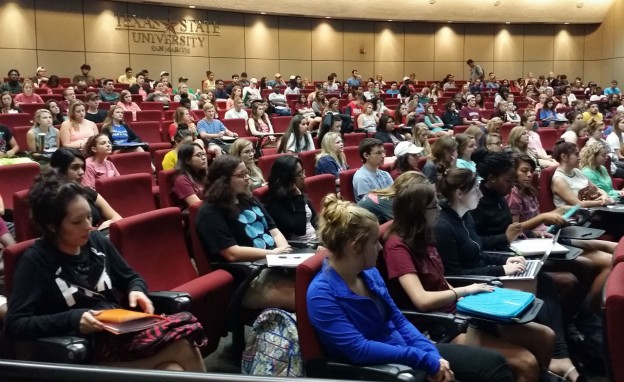 After we’ve written leads and produced stories and after I’ve given lectures on media law, reporter’s privilege and the authority of the AP Stylebook, I facilitate in my classrooms what I believe to be one of the most important discussions of our semester.

Why are we storytellers? We know what we’re doing and we’re learning how to do it, but why this job?

"I feel that the only way to help students reach their full potential is to bring these discussions into the classroom," said Karen Munoz, a Texas State University student.

The Why. Two simple words on my syllabi usually found on a lecture day toward the end of the semester though I’m toying with the idea of talking about it earlier on. I think it’s that important.

To begin the conversation, I show my students Simon Sinek’s 2009 TED Talk “How Great Leaders Inspire Action.” True to TED Talk form, Sinek is succinct during the 18-minute video. He introduces his theory of the Golden Circle: Our WHY being at the center of our WHAT and HOW.

I share my WHY behind my decision and motivation to be a storyteller. There was my childhood and my father’s ideology that said I wasn’t supposed to go to college, much less earn a master’s degree and now orchestrate my own university classrooms.

Then there was the two-week trip I took to Romania when I was 19 where I realized I wanted to use my writing to change whatever corner of the world I happened to be in. I’m honest about the hustle, the lifestyle adjustments, the risk of failing and the good that you open yourself up to when you jump into the path of opportunity.

My WHY is the mission statement behind launching VoiceBox Media — a nonprofit news service that covers the growing population of citizen changemakers.

What is your WHY? Talk to us.

Most of my students do, sometimes shyly at first, then more boldly. Some say they don’t have a WHY. Some say this is the first time they’ve been asked to consider it. Some say they’ve had epiphanies during these conversations.

“Discussing the WHY in class made me realize that it’s not so much about what we’re doing as why we’re doing something. It’s all about the bigger picture — for me, at least — and when I realized that I’m doing PR for something greater than just myself, it made me realize that it’s important,” said Karen Munoz, a public relations student at Texas State University, in an email after our WHY discussion in an editing class. “I feel like realizing that in your class really put things back into perspective for me, so I’d say it was a pretty powerful moment.”

Tara Pohlmeyer, a student studying electronic media, said it was during this conversation in our News Writing and Reporting I class where it “clicked” for her.

“The real successful people in life – those who love what they do and seem to have everything – have found their why,” she said. “The why is what pushes them to do more, what makes them better.”

Pohlmeyer said one of her favorite parts of Sinek’s TED Talk is when he says, “There are leaders and then there are those who lead.”

“A leading leader would be the absolute best, but that isn’t always the case,” Pohlmeyer said. “It’s times when it’s ‘those who lead’ who step up to do what needs to be done. When it comes to school, internships, jobs and life in general, knowing your why will take you farther. It’ll make you that person who leads.”

These are, I believe, some of the fundamentals of storytelling. Our industry needs people who know that just because they might not have a title that bestows power, they are linchpins in their workspaces and in our modern media landscape.

This theory can be extrapolated to the foundation of the stories we’re telling and the tools we use to tell them. For my public relations students, they make the connection that to best represent a client (whether company or person), they must first know their WHY.

Texas State University and VoiceBox Media intern Reynaldo Leanos Jr. edits an audio file for a story he is producing about immigration in Texas. Photo by Holly Wise.

Jenna Hawkins, a senior studying public relations at Texas State, wrote her first published article earlier this month about a long-time lumber company closing its doors. In interviewing the owner, my former student said, she “did the why without realizing that’s what I was doing.”

“The WHY creates a connection and makes the reader and audience have a better connection to you,” said Hawkins.

“Definitely start asking why,” she added. “It can help you grow.”

It’s not often students email me to say how a discussion about the inverted pyramid reignited their passion for our work, but they do write or stop me in the hallway to say: “The WHY is exactly what I needed to hear.”

“I think the classroom is an incredibly appropriate place to have a conversation like this,” Munoz said. “In my experience, students who are also involved outside of the classroom are the most developed and the most aware, most ready to change the world. I feel that the only way to help students reach their full potential then, since too many aren’t involved, is to bring these discussions into the classroom.”

Pohlmeyer added her affirmation. “I really needed to re-watch this TED talk,” she wrote me after agreeing to contribute her voice to this article. “I think it’s part of what I needed to hear this week.”

What are your students telling you? What’s their WHY?

Holly Wise teaches journalism at Texas State University in San Marcos, Texas. She is the founder and executive editor of VoiceBox Media – a news service dedicated to telling the stories of people who are making change happen in their communities. She recently completed her memoir, “And Then This Happened.”