Lessons Learned After 5 Years of iPhone Reporting for Radio 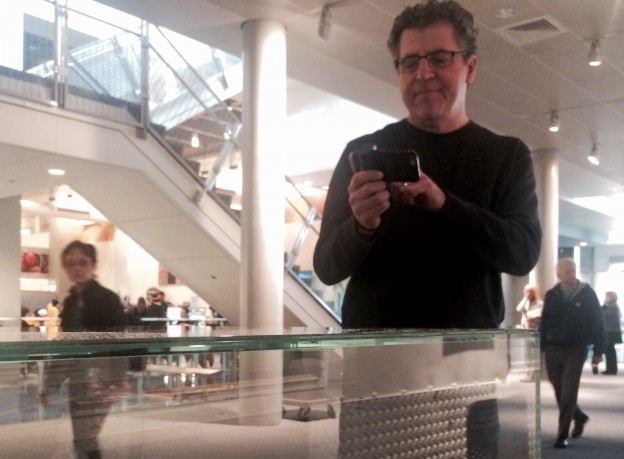 The author on his iPhone at the Newseum. Photo by Bill Crandall.

The Newseum recently displayed one of reporter Neal Augenstein’s phones, as what the Poynter Institute called “an artifact of the new era of mobile-empowered reporting.” Here, he reflects on five years as an “iPhone reporter” and shares his thoughts on what’s next for mobile reporting.

Five years after I put away my laptop, digital recorder, video camera and Comrex codec, and began doing all my field reporting on an iPhone 3GS, mobile journalism continues to transform the way news is covered — for better or worse.

"Despite warnings that the profession of journalist is doomed to extinction, I would argue trusted, trained journalists are more valuable now than ever."

Since February 2010, when I began my #iphonereporting experiment at WTOP-FM — Washington’s all-news radio station — technology has evolved, along with journalists’ job descriptions. And WTOP’s focus changed from being the top-rated radio station to being a multi-platform digital news organization.

While better and faster phones, innovative apps and social media are making it possible to report news more quickly, the news industry has continued to change. Because of smaller news staffs, some wonder whether the quality of journalism has suffered.

My iPhone 4S, which recently went on display at The Newseum, in Washington, D.C. Photo by Bill Crandall.

The newest iPhones, 6 and 6 Plus, have bigger screens than previous models. Android phones, including the popular Samsung models, have also expanded screen sizes. As more and more smartphone users consume video, with older (and younger) users purchasing smartphones, companies have responded.

In 2015, photo and video-sharing sites — Twitter, Facebook, and Instagram — are often where news is broken, generally in visually-oriented, easily-digested tidbits. Facebook (which purchased Instagram) and Twitter have altered their mobile apps to provide similar features to Instagram, which boasted over 300 million active users in 2014. Visual storytelling apps such as Steller, Storehouse, and JamSnap provide an alternative to traditional news packages and can be used in conjunction with those legacy packages, to remain engaged throughout the day with listeners, viewers, and users.

The shifting role of the reporter

Armed with the power of a smartphone and social media, any person is now capable of capturing a dramatic moment and sharing it with the world, bypassing the media. While some argue smartphones eliminate the need for the legacy news industry, WTOP and other respected news organizations are embracing the challenges and possibilities afforded by mobile journalism. With handheld tools, journalists now often report elements of a story as they unfold. The difficulty of retracting incorrect information increases the importance of traditional journalistic values, including accuracy, taste, perspective, context, and fairness.

New apps make it possible to livestream video, without a satellite truck. Photo of Neal Augenstein by Bill Crandall.

Video live-streaming platforms such as Bambuser and UStream have existed since before I began #iphonereporting in 2010. A new wave of easier-to-use-and-share apps, including Periscope and Meerkat, are piquing the curiosity of the public and journalists. With just a few touches and within five seconds, a user can stream live smartphone video to several social networks. In breaking news situations, smartphone video is often on the air, while traditional satellite trucks and news crews make their way to the scene.

Satellite phones made it possible for video of a reporter or newsmaker to be transmitted from remote locations without a satellite truck. Now, Internet-powered video and voice chat apps, including Skype and Apple’s FaceTime feature enable two-way communication from phones and tablets. In remote locations, the quality of the video or audio is often inferior to professional-grade transmissions,  yet in the increasingly competitive digital news environment, news organizations often choose to air this raw content in  breaking news situations.

Most news organizations incorporate some aspects of mobile journalism. Photo by Bill Crandall.

The growing need for journalistic storytelling

Despite warnings that the profession of journalist is doomed to extinction, I would argue trusted, trained journalists are more valuable now than ever. With so much “noise” online  and as business models continue to change, I believe there will always be a need for accurate, ethical and creative storytelling.

Mobile journalism is alive and well, and I can’t wait to see what the next five years brings.

For the past 18 years, Neal Augenstein has been an award-winning reporter with WTOP-FM, and wtop.com, in Washington, D.C. He’s the first major-market radio reporter to do all his field reporting on an iPhone. His website is iphonereporting.com. On Twitter, follow Neal @AugensteinWTOP.

After years as a renowned photojournalist, Washington, D.C.-based photographer Bill Crandall is focusing on long-form documentary projects. His photobook, “The Waiting Room — Photographs from Belarus”  is available here.