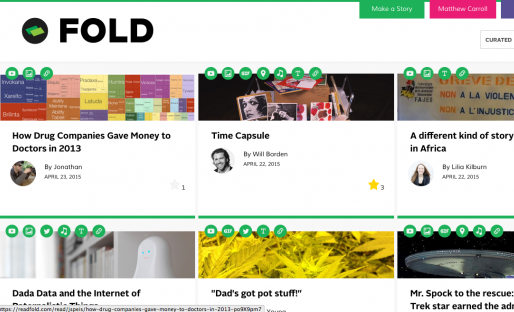 Fold is a platform for telling stories with a rich layer of multimedia contextualization.

It’s an event where people hope to catch a glimpse of the future. Twice a year, the MIT Media Lab throws open its doors to its corporate sponsors, who carefully examine and prod the projects that the lab’s graduate students are creating.

Hundreds of people from top companies from across the globe attend. It’s a good time to unveil a new app or idea that has the potential to shake up the status quo.

"At a time when the news industry is going through dramatic disruption, news organizations are looking for any kind of edge that can help propel them forward."

This spring’s event in mid-April featured a number of news-related projects that attracted attention, led by Fold, a platform for telling stories with a rich layer of multimedia contextualization.

Fold opened up to the public shortly after the member event. Fold has attracted media attention because of its innovative way of telling stories. It breaks stories into component pieces, or “cards”, and reassembles them in innovative ways, mixing in pieces of multimedia that range from video to audio. The main story is written on vertical cards, while contextual information is added to horizontal cards.

It came out of a class taught by Ethan Zuckerman of the Center for Civic Media at the Media Lab. Two students, Alexis Hope and Kevin Hu, became intrigued with the idea of how to create “explainers” — stories that provide additional background information that help place the information into a more understandable and relatable context. The project was finished with the help of developer Joe Goldbeck. (Transparency alert: I am one of Alexis’s academic advisers.)

There’s a new emphasis on pushing news-related projects out of the Media Lab and into newsrooms. I am funded by the Knight Foundation, partly to look for potential projects that can radically transform news storytelling, help reporters do their jobs better, or help news organizations engage better with audiences in a time when brand names have been diluted.

At a time when the news industry is going through dramatic disruption, news organizations are looking for any kind of edge that can help propel them forward.

Here are some other projects that attracted attention and are in beta testing or are close to it:

Rumor Gauge: What if there was a tool that could detect which tweets were fake or true? How valuable would that be, say during a tragedy such as the Boston Marathon bombing, when many tweet memes were totally inaccurate, but proved difficult to kill. That was the genesis of Rumor Gauge. Soroush Vosoughi’s tool is designed to verify the truth of information put forth on social media. Vosoughi’s work will initially work with Twitter, and later expand to Reddit. It works by looking through three “lenses”: the language used in the tweet (e.g., the more formal the language, the greater the likelihood it will be true); how long it took to go viral (the longer it takes, the greater the chance it is false); and the tweet history and profile of the author (better: if the author is a journalist, mainstream Twitter celeb, or eyewitness). Rumor Gauge has been tested on the Marathon bombing, the riots in Ferguson, and the Ebola scare. Vosoughi is looking at commercial possibilities. For instance, he is considering a service-based website or app that might offer some number of free analyses, followed by a premium, paid model.

NewsPix uses high-impact, local photos to help users engage with their local news organization. It is a Chrome browser extension. Currently, when readers open a new, blank page in Chrome, they get a tab that shows recently visited pages. NewsPix replaces that with a high-quality picture from a news site. Users interested in more information can click through to the news site. News organizations can upload photos ranging from breaking news to historic events, with photos changing every time a new tab is clicked. It was developed by former student Catherine D’Ignazio, now a professor at the Emerson College Engagement Lab, Jay Vachon at Emerson, and Matt Carroll.

Scanner Grabber is a digital police scanner, created by Tal Achituv, that enables reporters to record, run playbacks, export audio files, and store public safety scanner conversations. Think of it as TiVo for scanners, and an update on technology that has been stuck back in 1960. It’s a great tool for newsrooms. For instance, a problem for reporters is missing the beginning of an important police incident because they have stepped away from their desk at the wrong time. Scanner Grabber solves this because conversations can be played back. Also, snippets of exciting audio, for instance a police chase, can be exported and embedded online.

Glyph is a tool by Savannah Niles that generates seamlessly looping gifs from Youtube videos. Glyph enables creators to create looped images that subtly impart depth and dynamism to images. They invite viewers in for a far closer, more granular inspection of what is happening. These are not Vines, with jarring beginnings and ends, but rather evocative images that can create or enhance moods. They work well in photo essays and for illustrations with stories. This is available to try out here: http://glyph.media.mit.edu/.