Advancing Journalism Innovation, One Fellowship at a Time 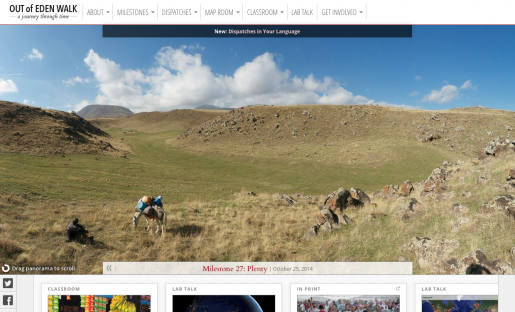 From 2013 to 2020, writer (and former Nieman visiting fellow) Paul Salopek is recreating the path of human migration, starting at humankind’s birthplace in Ethiopia and ending at the southern tip of South America.

Paul Salopek traced the path of human migration. Hong Qu sorted fact from fiction. Jack Riley explored the stylish world of wearable technology. What will you do?

From journalists and educators to technologists and coders, professionals from all walks of life can now improve the world of journalism thanks to the new Knight Visiting Nieman Fellowship. The John S. and James L. Knight Foundation recently announced $223,000 in support to the Nieman Foundation for Journalism at Harvard for this new program which offers short-term visiting fellowships to individuals interested in working on special research projects designed to advance journalism in some new way.

“Great minds from all fields are needed to propose innovation. New ideas will allow journalism to find its best possible future in the 21st century.”

“Great minds from all fields are needed to propose innovation,” said Eric Newton, the senior adviser to the president at the Knight Foundation. “New ideas will allow journalism to find its best possible future in the 21st century.”

Newton said journalism faces many challenges but the most fundamental involves competition. It used to be that journalists competed with fellow journalists; now they compete against everyone. This shift from competition to a form of collaboration prompts journalists to engage with — and not just inform — people who were once their audience.

A look at Hong Qu’s Keepr

This engagement with the community, coupled with new tools and techniques, has divided journalists into two categories: those who engage and experiment, and those who don’t. The latter grew up in a steady world where the news changed, but not necessarily the way that news was reported. The former understands the new rhythm, spending equal parts of their day writing, researching, experimenting, engaging, and tweeting. The former is also the type of candidate Nieman hopes to attract with its visiting fellowship.

Nobody knows what will emerge in the next 1, 5, or 10 years. But, as Newton noted, journalists need to get involved in their own futures and associate themselves with non-journalists.

“We don’t know where the next big breakthrough can come from. It’s really impossible to say, when you look at the past 20 years,” Newton said. “Things come from unlikely sources: economists, anthropologists, all types of people.”

What started as an experiment in 2012 has now become an integral part of the Nieman program. Ann Marie Lipinski, curator of the Nieman Foundation, said the program’s expansion stems from its success over the last few years, starting with the inaugural fellow, Paul Salopek. His Out of Eden Walk received overwhelming support and enthusiasm from the Cambridge community, she said.

For those who can’t commit to the full-time Nieman program, the visiting fellowship provides a unique opportunity to complete a project, recognizing that individual projects or ideas come from different industries. No matter their background, the program will bring a minimum of five fellows to Harvard each year, whether it be just for four weeks or the full twelve weeks.

“It’s hard for people in newsrooms to get time to work on projects,” Lipinski said. “This fellowship offers the time and space for people to enhance journalism in meaningful ways.”

Visiting fellows will work alongside traditional Nieman Fellows who spend the entire academic year at Harvard. Coming from the United States and abroad, they will have access to the extensive intellectual resources at Harvard and MIT, and throughout Cambridge, including local scholars, research centers and libraries. Unlike the traditional Nieman Foundation fellows, the visiting fellows come to Harvard with a concrete idea to advance journalism. Whereas the full-time fellowship invests in individuals as leaders, the visiting fellowship invests in individual projects. With such a robust network at fellows’ fingertips, there will be fertile ground for new ideas and new solutions.

Applications for the next class of visiting fellows will be available this summer.