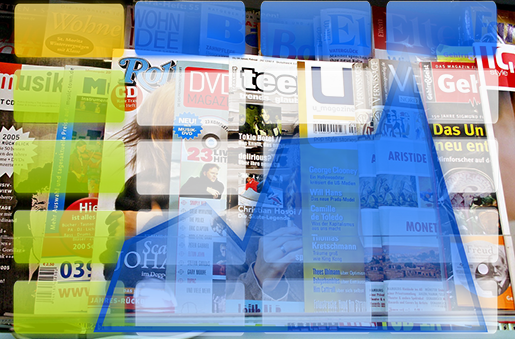 Every month, the Magazine Media 360° audience report lands in my email inbox. I’ve always wanted to dig deeper into that intriguing spreadsheet.

Finally, it’s spring break — and what else does a journalism professor do on vacation but play around with data?

This report is released by MPA, the Association of Magazine Media. Its full name is “The Magazine Media 360° Brand Audience Report.” It summarizes in a 5-page document (here’s February’s PDF) the current and year-over-year audience data for about 145 magazines, across all platforms, including print/digital editions, web, mobile and video, and also provides a total “360° metric” for all of those combined. This 360° metric is more “comprehensive and accurate,” the MPA says, because it pulls together all the places consumers encounter magazine brands, as opposed to just counting print readers.

Obviously, advertisers will be interested in these numbers — but as a data geek with a little too much time on her hands during spring break, I was curious, too. Here are my three main takeaways from this month’s report, after spending far too much time in Excel and playing with data visualization tools.

1. The news for magazines isn’t generally great.
The MPA’s press release with these data is optimistic, of course, but some quick Excel sorting reveals a few discouraging realities. Since February 2014,

It’s important to note that not every magazine had the data necessary for each one of those year-over-year comparisons, so this is just what we can tell from what’s available.

The chart below shows how the magazines’ print/digital editions have lost or gained audience over the last year (in blue), and how they have also lost or gained total audience across all platforms (what the MPA calls the 360° audience, in green).

While some magazines have made up for print/digital reader losses with significant growth on other platforms (for example, Playboy), others have lost audience on all platforms (such as Road & Track) or have gained everywhere (such as Wired, one of the aforementioned outliers). Some of these magazines might make great case studies for success — or cautionary tales.

A brighter spot for many magazines was mobile audiences, with 93 percent of the magazines’ website showing growth in visitors using mobile devices. That’s a pattern across all media, of course, not just magazines, and the popularity of somewhat larger phones is probably helping.

2. The industry totals look different from individual magazines.
It makes sense that the MPA, as an industry organization, would be most interested in the performance of the entire industry, and in promoting its members’ success in increasing their audiences. However, it seems a little more realistic to me to look at how individual magazines are performing: Are individual titles managing to build their audiences, and how are they losing or gaining ground on different platforms?

It’s easy to calculate the average percent change across all of the 142 magazines included in the MPA report, but with some obvious outliers (like Allrecipes’ 32,000 percent increase in its video viewers), averages don’t work so well. Instead, medians are shown in the table below for comparison with the MPA’s totals.

The data aren’t so different for the change in audiences for magazines’ print/digital editions, website or mobile platforms. However, the median percent change for these 142 titles’ video audiences is about 36 percent lower than the MPA’s across-the-board total — and into the negative, and the “360°” audience across all platforms grew about 5 percent less than the MPA states when considered this way.

This analysis isn’t to say that the MPA is deliberately misleading, but rather that a different way of looking at the data yields a different conclusion, especially about how magazines are doing with their video efforts. Only 45 magazines were able to report year-over-year data specific to video, so future months will probably establish a more reliable trend.

3. Magazines working with Next Issue Media are doing a little better.
As D. B. Hebbard recently reported at Talking New Media, Next Issue Media — the all-you-can-read app that’s a joint venture of six major publishers — seems to have significantly boosted the digital single-copy sales of Hearst’s top seven magazines. Those sales almost tripled, in part because the Alliance for Audited Media reports Next Issue readers as “sales.”

Separating out the current Magazine Media 360 data by those magazines available or not through Next Issue reveals that the Next Issue participants saw a total audience growth of about 9 percent year-over-year, as shown in the chart above. Magazines in the report that are not participating in Next Issue still increased their audiences by about 5 percent.

The magazines not participating saw solid mobile audience gains, though, so perhaps they have turned their attention to improving their mobile presences outside of a dedicated magazine-reading app.

About the Data and Analysis
The MPA distributes these data as a PDF on its website and with a press release. The emailed press release states that recipients may “feel free to promote and utilize the data in any way.” I ran the PDF through Cometdocs to convert it to an Excel spreadsheet. I reduced the dataset to the year-over-year percent change figures, added a column for the magazines’ publishers, and added a column for whether or not the magazine is available through Next Issue Media (determined through its website’s catalog search; current as of March 24, 2015). I deleted Fortune and Money because, as the MPA says in a footnote in their original PDF, web and mobile data were not available for them due to a now-ended joint venture with CNN. I then uploaded the file to Silk, a free service, which produced the visualizations seen here (with the exception of the two small graphs, which I created with Chartbuilder).

Please let me know if there are errors in the data, or if you see additional significant items that I have missed; I’m sure that there are many other potential trends and stories buried in this intriguing dataset.