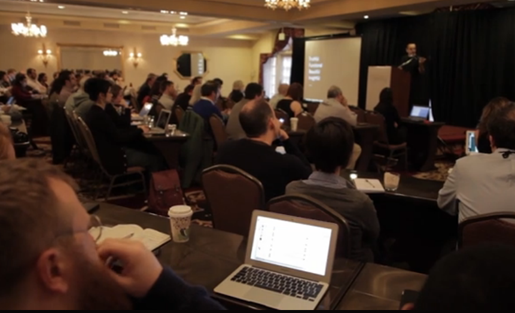 This held true around the country; data showed that hospitals charged vastly different amounts for ECGs while Medicare frequently paid hospitals a few hundred dollars for the procedures. A scatterplot depicted a cluster of data points around the $400-$500 mark, but the chart’s creator felt it lacked clarity and resonance.

Deadline looming, Hannah Fairfield, senior graphics editor at the New York Times, created a bar chart in which the steep L-shaped curve of hospital prices and the flat line of Medicare reimbursements depicted the stark gap between the price tag and the value of a simple medical procedure (see below). Graphics like these demonstrate how data storytelling can help people understand and relate to broad ideas such as the high cost of health care.

traversing the gap between data and knowledge

Fairfield’s experience highlights the iterative nature of data storytelling, which involves pulling insight from data and using visualization principles to guide people to a message. People don’t collect data to create charts or graphics; they collect data to answer a question or learn something. Visualization is simply a tool to help traverse the gap between data and knowledge.

Many tenets of good data storytelling mirror the traditional conventions of journalism. Verify facts and check assumptions. Provide enough context so the reader understands the story, but don’t bury the message.

“Do the reporting and show the reader exactly what they should be getting out of your piece,” Kennedy Elliott, a Washington Post interactive journalist, said at the Tapestry data storytelling conference.

But data storytelling is applicable beyond journalism. Companies leverage data to make business decisions. Researchers generate new knowledge to explain the world in which we live. Advocates and activists galvanize the public to address the challenges that face society. Ranking Digital Rights, a 2014 Knight News Challenge winner and the project on which I work, is ranking technology companies on their respect for free expression and privacy. We want our data to tell stories and to serve as a resource for others who work or take interest in digital rights.

what works with data storytelling

A variety of techniques can help data storytellers accomplish these goals. Displaying data in various graphic forms provides a starting point to identify potential stories. Plotting data on a map can suggest regional trends. Displaying it in a line chart shows change over time. Creating a scatterplot can reveal relationships between different variables.

When presenting a story, data storytellers should consider what captures people’s attention. Michael Austin, provost of Newman University, has researched the evolutionary basis of humans’ deep-seated attachment to narrative.

“Successful narratives are those that introduce and then resolve our anxiety,” Austin said. He pointed out the universality of stories about people-eating monsters, disruption of social order, unsolved puzzles, or the unknown. A satisfying narrative depicts how people deal with and ultimately resolve the anxiety these elicit.

Data storytellers can also play off people’s penchant for navel-gazing. Chad Skelton, a data journalist at the Vancouver Sun, created an online calculator in which people could look up median salaries based on various demographic characteristics. People could see how their own salaries stacked up against others like them, but they could also see how much more or less the average male, older, or Latin American version of them would make. “In short, we get readers to care about the big picture by showing where in that big picture they are,” Skelton said, adding that this calculator garnered far more traffic than a chart that displayed the data.

Ultimately, data storytelling gives the audience agency to explore data and consider what it means to them.

“Our job is to create an experience for the audience where we give them nodes and they connect them,” said data visualization expert RJ Andrews. “It’s not just, ‘Show them, don’t tell them. It’s, ‘Show them in a way that they tell it to themselves.’”

Priya Kumar is a program associate with Ranking Digital Rights, a winner of the 2014 Knight News Challenge on strengthening the Internet.