How a Plugged-In College Student Spent 24 Hours Without Tech 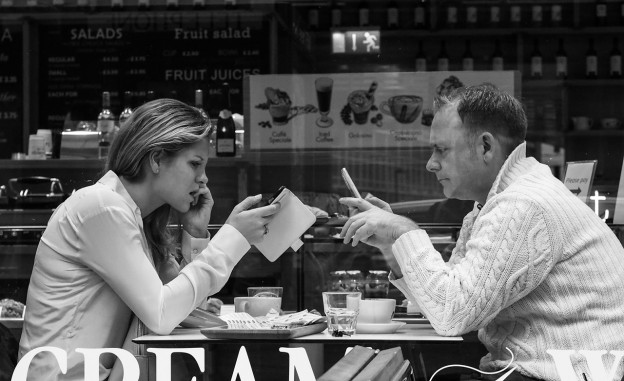 "For once there were no impromptu meetings when my class got out early and no one to text when I was waiting in line for coffee. I had moments in the day when I was completely alone."

As a global community we are spending an average of 10.7 hours a day on all forms of media, over half of which is on digital media, according to Smart Insights. This doesn’t come as much of a surprise. It has become so ingrained in our culture that it is rare for people not to have their phone by their side. Fast Company says 79 percent of people keep their phone with them for 22 hours of their day and one in four people couldn’t recall a time when their phone was not at least in the same room.

A Snapshot of My Media Use

When I decided to unplug, I was filled with dread. I was convinced it would be too much for me to handle. In my mind this 24-hour period would be riddled with missed calls from home, unanswered emails and a constant cloud of anxiety.

To get a sense of how much time I really spent on technology, I kept a media log for a 24-hour period leading up to my unplugged day. In that 24-hour period, there was not a single time that I went more than 45 minutes without checking technology outside of the seven hours I was asleep. Beyond just the active use of technology, I noticed that I was always close to at least one of my devices. This day wasn’t unique.

University of Maryland: A Day Unplugged

A research study conducted by ICMPA and journalism students at the University of Maryland showcases many of the anxieties and behaviors I feared during my day unplugged. Like me, these students abstained from all forms of media for a 24-hour period and then engaged in discussion about their experiences.

Many of these students described classic symptoms of withdrawal during this exercise. A few students reported feeling fidgety and noticeably more stressed when they did not have their phones with them during the day. Others referenced the immense feeling of relief that overcame them when they were finally able to use their phones and reconnect with the world.

Leading up to the day of unplugging, I posted on Facebook so my friends and family would know I wouldn’t have my phone. I gave my co-workers a heads-up in case they tried to reach me when I wasn’t in the office. I even checked the weather. I was so nervous about being disconnected that I prepared in every way I could think of.

When I got up in the morning I turned off my phone and my computer, left them on my desk and walked out of my apartment before I could change my mind. I remained unplugged the entire day.

Surprisingly, the day turned out to be relaxing. Except for a few moments of panic, my lack of technology was largely unnoticeable. I did, however, notice the sheer number of times I thought about my phone or computer. I had quite the “to do” list going by the end of the day. I had an idea of how much I used my phone, but I was still shocked by how much I relied on my phone and computer to communicate with people.

Aside from my roommates, coworkers and classmates, I didn’t have many connections. For once there were no impromptu meetings when my class got out early and no one to text when I was waiting in line for coffee. I had moments in the day when I was completely alone.

The project showed me just how much I rely on my phone to make connections and fill “empty” time. Instead of talking to people around me or paying attention to the world, I stare at my phone screen. My phone has become my safety blanket in social situations. It wasn’t until I sat in lecture 15 minutes early for class twiddling my thumbs that I realized that.

A Lesson in Balance

I spent all semester researching, interviewing and writing a magazine article about mindfulness and unplugging. I actively thought about how it would be good for me to finally unplug from technology, but I immediately decided that it wasn’t an option in my life because I needed my phone and my computer. Clearly, that wasn’t entirely true.

What I realized is that you don’t need to do a digital detox for an extended amount of time. Something as simple as not looking at your phone while walking or not pulling your phone out in every line can go a long way toward restoring some balance.

I also learned that unplugging from technology doesn’t have to be a scary, anxiety-ridden experience. Unplugging can be a time to reflect on where you are and what you’re doing. It can be a time to look up and see the people around you. It can be the chance to laugh hysterically with your friends without the constant vibration of your phone. It can be a chance to take a breath.

This all being said, here I am writing on my computer, with Pandora playing through my headphones and my phone is less than an arm’s length away. I am completely plugged back in and have been since the moment my 24-hour technology hiatus ended. But, since this project, I’m trying to unplug a little bit more every day. Will you?

Emily Skorin is a senior at the University of Wisconsin-Madison majoring in Journalism with a double concentration in strategic communication and reporting. She is also getting Certificates in Business and Leadership. Her previous projects and career experiences (available here) have influenced her interests in technology and media. She is looking forward to a career in advertising that allows her to think creatively and tell stories.

This article is adapted from a paper written for University of Wisconsin-Madison Assistant Professor Molly Steenson as a final project for Journalism 676: Information Landscapes and Data Cultures. The full paper is available in the class’s Medium Collection.