Fighting Words: Inside the Social Media War Against ISIS 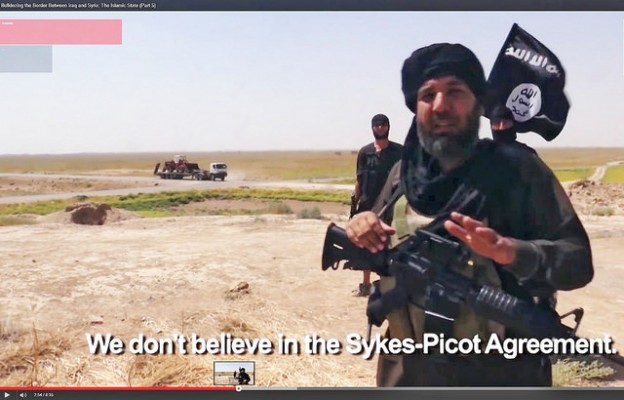 It has been four months since the formation of a U.S.-led global coalition to fight ISIS in Iraq and Syria. Hundreds of airstrikes purporting to hit ISIS targets have been carried out since then. Some 60 nations are involved in the coalition, and they have all contributed to the fight in different ways. Yet, ISIS is still gaining ground.

While the fight raging through many of Iraq and Syria’s provinces has and is being documented thoroughly, the fight being carried out online hasn’t been charted quite as well.

"While the fight raging through many of Iraq and Syria's provinces has and is being documented thoroughly, the fight being carried out online hasn't been charted quite as well."

The sophisticated online propaganda machine used by the terrorist group to both inspire and intimidate has effectively shaped the dynamics on the battlefield.

Around 20,000 foreign fighters have flocked into Iraq and Syria to join ISIS so far. According to a new report by the International Centre for the Study of Radicalisation and Political Violence (ICSR), the steady flow of fighters to the region has been greater than “every other instance of foreign fighter mobilization since the Afghanistan war in the 1980s.”

Since its emergence on the world stage, ISIS has been steadily strengthening its grip on social media and video production. It has proved how effective its means of recruitment online can be, and has displayed how fast it can spread rumor and propaganda on the Internet.

These are strong weapons in any war. So, who is fighting back?

A sheikh armed with a knife and pistol teaches recruits in an Islamic State boot camp. Screenshot photo by Karl-Ludwig Poggemann and reused here with Creative Commons license.

In September 2014, a Twitter account affiliated with the hacktivist group Anonymous declared a “full-scale cyber war against ISIS.”

“We will hunt you, take down your sites, accounts, emails, and expose you. From now on, no safe place for you online,” the group said in its statement.

The efficacy of their strategy has been questioned. While taking down Twitter accounts can temporarily hinder ISIS’s propaganda machine, most users come back under different names within a day or so of being taken offline.

Other ways to counter the influence ISIS has online do exist. Long before Anonymous emerged on the battlefield, Iraqi and Syrian activists were putting up a digital fight of their own.

According to Iraqi activists, prior to its attack on a city or town in Iraq, ISIS usually spreads rumors online claiming it has already seized control. Relying on intimidation and fear to weaken Iraqi morale, ISIS-affiliated Twitter and Facebook accounts send out hundreds of images and videos showing death and destruction, alleging they were taken in whatever town they’ve decided to raid next.

When rumors reached Baghdad in late September 2014 that ISIS militants were closing in on the capital, a group of young Iraqi activists launched a pre-emptive campaign on social media asking people in Baghdad to post pictures of their neighborhoods using the hashtag #Baghdad_Okay and its equivalent in Arabic to counter the spread of fear and misinformation.

The campaign was widely welcomed by locals in Baghdad. Videos and pictures were posted online showing Iraqis in the capital going about their daily business.

Translation: Baghdad today is the prettiest Baghdad and for those trying to kill it, it will rise again. Baghdad is beautiful. Baghdad is stronger than you are. Whether you like it or not ISIS

Translation: During our tours today of Baghdad’s streets, especially Al-Rashed and Al-Mutanabbi

In the fight against ISIS propaganda, other hashtags, such as #NO2ISIS and #INSM_IQ, have also been circulating online. #NO2ISIS brings attention to Iraqi civilians standing up to ISIS across all compromised provinces. #INSM_IQ is primarily being used to verify or disprove any information circulated by ISIS online.

Hayder Hamzoz, blogger and co-founder of the Iraqi Network for Social Media, has been at the helm of such efforts. “We try to fight them online rationally, not emotionally,” he said in a recent conversation with IFEX, noting that sectarian rifts in Iraqi society are hard to overcome, and that a person’s personal account of events could be easily discredited because of his religious affiliation. Iraq’s sectarian rifts have deepened ever since the US-led invasion in 2003, which catapulted the country into a state of perpetual violence. “But if you fight rumor with fact,” he continued, “then sectarian issues are over.”

Although convinced by the merits of fighting ISIS in the digital sphere, Hamzoz has admitted that the success of such grassroots initiatives has been limited.

“ISIS is financially supported,” Hamzoz said. “Fighting them will require more effort and support.” So far, support for the groups’s initiatives has not come from the Iraqi government. Nouri Al-Maliki’s former government took a different approach, trying to counter ISIS online by temporarily blocking social media platforms, including Facebook, Twitter, Skype and YouTube, “in an attempt to stop the group from spreading propaganda and recruiting followers among Iraq’s repressed Sunni minority.” In some areas, it tried to block the Internet completely.

Jillian York, director for international freedom of expression at the Electronic Frontier Foundation, told the BBC at the time: “The Iraqi government will not achieve anything by blocking social media websites, rather, in doing so, they’re cutting off a lifeline for activists and others to the outside world.”

According to Hamzoz, the current government, headed by Haidar Al-Abadi, doesn’t have a plan of action in regards to retaliating online.

In the Syrian province Raqqa, claimed by ISIS as the capital of the self-proclaimed Islamic State, civilians are also using information and digital communication in the fight against the terrorist organization.

Raqqa is Being Slaughtered Silently (RIBSS) is an underground group of Syrian activists, many of whom are based in the city. A few of them operate outside of Syria to protect the identities of those on the inside. The group’s mandate is to make sure the world knows what it’s like for the people of Raqqa to be caught between the brutality of ISIS militants and the airstrikes of the United States and its allies.

Since launching in April 2014, the group has amassed around 18,700 followers on Twitter, and over 34,400 on Facebook. They have been quoted in The Independent, The Daily Beast, Vice News and others. They have been risking their lives to show the atrocities committed by ISIS on a daily basis, and at least one member of the group has been caught and killed by militants.

RIBSS gained further exposure in the hours after a video of the murder of Jordanian pilot Muath Al Kasasbeh was posted online on February 3, 2015. The Syrian activists were the first to reveal that he had, in fact, been killed a month earlier.

A member of the Syrian group broke the news on January 8 in the tweets embedded below, but was quick to mention that the reports were unconfirmed.

1-A group of #ISIS members in #Raqqa are talking among them enthusiastically about the execution of Jordanian pilot, Maath Al-Kassassbeh,

2- who was burned to death by #ISIS – the reports are unconfirmed yet #Syria — Abu Ibrahim Raqqawi (@raqqa_mcr) January 8, 2015

Not all those who have been taking on ISIS online have been helping the cause. Some have been spreading rumors of their own, discrediting the efforts of activists on the ground. One such rumor, claiming that ISIS ordered all girls in Mosul to undergo female genital mutiliation, originated with the UN’s deputy humanitarian coordinator in Iraq and made it into mainstream news before finally being discredited. In August 2014, ISIS-affiliated Twitter accounts started using the hashtag #IraqiLies to debunk the rumors and ramp up support from those already receptive to their propaganda.

ISIS has been making gains elsewhere in the region. Egypt’s Ansar Bayt al-Maqdis, a militant group based in Sinai, swore allegiance to the group in November 2014. Most recently in Libya, ISIS militants brutally executed 21 Egyptian Christians and publicized their deaths online.

It is clear that airstrikes have failed to halt the flow of foreign fighters traveling to the region to join ISIS, and some Western governments have acknowledged that an online strategy is also required in order to make any gains in this unsettling war. According to Global News, Canada has made eliminating the propaganda that supports ISIS a priority in newly proposed anti-terror legislation, while the governments of France and the U.S. have chosen to actively counter the ISIS narrative instead.

In October 2014, the U.S. urged its allies to wage an online battle alongside its military offensive. Representatives of coalition countries met in Kuwait City to discuss how to actively dissuade potential foreign recruits online.

“It is only when we contest ISIL’s presence online, deny the legitimacy of the message it sends to vulnerable young people… it is only then that ISIL will truly be defeated,” said retired U.S. general John Allen at the meeting.

Four months later, there had been no signs of any concerted efforts by the coalition to achieve what was discussed at the meeting. However, on February 16, 2015, the Obama administration announced that it was intensifying efforts to blunt ISIS’s message online by expanding a State Department agency, the Center for Strategic Counterterrorism Communications, to aggregate, curate and amplify efforts to counter jihadist propaganda online.

The White House is currently convening a three-day Summit on Countering Violent Extremism, bringing together representatives from law enforcement, civil society and partner nations, including representatives from U.S. military allies in the Middle East. The meetings will focus on themes of community engagement, religious leader engagement, and the roles of the private sector and tech community in preventing violent extremism and foreign terrorist fighter recruitment.

Director of the Cairo Institute for Human Rights Studies Bahey Eldin Hassan was among those civil society representatives officially invited to attend the summit. In a letter sent to President Barack Obama in advance of the three-day meetings, Hassan, along with the president and CEO of Human Rights First Elisa Massimino, stressed that any effective strategy to combat violent extremism must call out and condemn the practices of repressive governments in the region. “Violent extremists and repressive, authoritarian governments feed off of each other in a deadly — and mutually reinforcing — cycle.”

In an Op-Ed on the next steps in the fight against violent extremism, Obama acknowledged the role of oppressive governments. “Governments that deny human rights play into the hands of extremists who claim that violence is the only way to achieve change,” he wrote.

During a televised speech at the summit on February 18, he said, “We need to find new ways to amplify the voices of peace, tolerance and inclusion — and we especially need to do it online.”