An Experiment in International Travel and Disconnecting from Tech 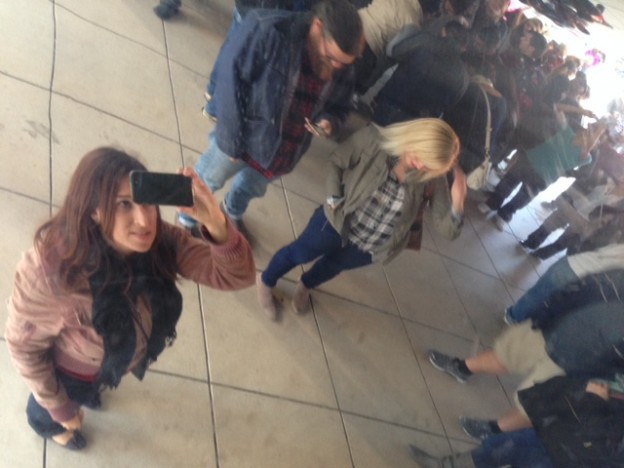 Since October I’ve ventured to 13 cities in 9 countries. My passport now has stamps on it from Kenya, Mexico, Jordan and India, to rattle off a few. And it’s gotten to the point where my apartment is not a living space but a refuge for clothes that either just emerged from my suitcase or never made it in there in the first place.  All of this traveling and running around has had a purpose that neither involves espionage nor military service. It was for an incredible reporting fellowship covering startups and innovation.

"Cognizance about how overwhelmed I feel sometimes because of technology and, on the flip side, how free I felt spending prolonged time offline, was a gift. "

Saying yes to the opportunity was a no-brainer, as was the chance to circle the globe and relay amazing stories along the way. But what I did grapple with was the how — specifically in terms of technology. I have an iPhone, laptop and an iPad. But what would I use and how often? Being abroad poses a problem when it comes to constant connectivity, especially on a smartphone.

Should I upgrade to an international data plan? Get more minutes for voice calls? Ensure that I could get online with my laptop at all times?

In the end — because we’d be in each locale for such short spurts of time — I said no across the board and opted against any of those connectivity upgrades. It didn’t seem worth the trouble to arm myself in this way. What this meant is that I put myself in a position, over these months, of being unplugged — sort of.

On past personal trips I’ve gone off the grid entirely for a few weeks, only bringing along a tablet in case of emergencies or to let my mom know I was alive. This time, since I was working, I couldn’t log off completely.  But I cut back. Drastically. Wifi was pretty much my only means of getting on the Web. The hotels in which I stayed tended to have Wifi, as did the venues where I was covering startup pitch competitions. So I could file my stories and set up appointments. But in between I was offline. It was 2000 all over again. If someone wanted to message me, I had to be posted up at my temporary home or working place. Out and about I was absolutely unreachable.

My phone served as a camera and a place to jot down notes to myself. That’s about it. No texting, no emails, no Instagramming or Facebooking (at least right away) the tacos I ate or the cow that crossed the busy roadway in Bangalore and held up traffic.

My teammates from 1776 did upgrade to more sophisticated data plans and were about as connected as they would have been in D.C. or any other U.S. city. So it ended up being an inadvertent solitary offline adventure.

Here’s how I found it:

Tougher than anything else was getting around. It’s easy to forget how dependent on ride-sharing apps like Uber and Lyft we have become. But I was reminded in a hurry. For some of the places, locals advised us that seeking a random taxi could be dangerous. Uber is considered the safer option as well as the simple records-keeping choice. Yet it’s also the option that’s dependent on being online with a mobile device.

My general procedure was to summon my ride from the safety of the hotel’s WIfi and then wait and hope outside. Sometimes this worked. In Tel Aviv I constantly had drivers whom I couldn’t find and then couldn’t call. So it would take three or four requests for one Uber.

The most disastrous Uber ride of my life came in Mexico City when my driver got us so inexplicably lost I was in his car for 90 minutes on a drive that should have taken 20. Without Internet I couldn’t direct him or use my phone to help us. I could only keep repeating the address and cross street and in broken Spanish continue to ask, “Donde estamos” until eventually the destination appeared. I’ve never felt so helpless.

In other places, being disconnected meant something as simple as coordinating meeting up with someone was impossible. When, in Amman, I wanted company while checking out ancient ruins, I emailed the group. But I didn’t want to wait all day for a reply. So by 10 a.m., I set off. It wasn’t until I was back at the hotel hours later that I found out someone had said yes to joining me. It was 20 minutes after I left my self-imposed Net bubble.

The other thing that I noticed is that, because my online time was limited and location-dependent, I became a bit of a lunatic about it. If I had gone without for 12 hours and then needed to, say, post content to the Web, I’d stride into a room where I thought there was Internet and immediately need to know two things: What was the Wifi password and where was the outlet to plug into (and possibly the obscure adapter I needed to make plugging in work).

Wifi inquiries were my greeting. Then I’d use the Wifi, and like an addict who got her fix, I’d settle down again.

I take yoga on a regular basis and love when an instructor emphasizes to practitioners to be present, not letting outside thoughts enter. No to-do lists for later — just downward-facing dogs and warrior threes.

Being offline, especially while walking around a foreign city takes this “being present” mantra to a whole new — and mostly exciting — level.

During my travels, I felt more observant and attentive. Without the distraction of an iPhone, I smiled at the random pottery maker or the man grilling corn on a Nairobi side street. I stopped to chat with the girl working in the Amman museum and had an uninterrupted conversation with her about women’s rights for two hours.

If I became hungry, I just asked someone where to go — as in with my voice, not via Yelp or a Twitter Hail Mary. Or I’d just go where the delicious smell of falafel took me and hoped the cuisine lived up.

During times when I was with other team members who were online I let them dictate where we went. It proved to be a refreshing break from always having to triangulate my exact geographic position and where it fell in relation to some next desirable activity. I also had moments when I’d look around and three other heads at the table were down, transfixed by their devices, doing I’m not sure what. Meanwhile I’d look around or bask in my pilsner. I rather came to enjoy the quiet moments of observation and reflection, of really feeling engaged in the scene I was in.

And where does that leave me?

This was, make no mistake about it, a temporary situation, an experiment. I don’t think it’s possible for me to stay offline on a regular basis while trying to maintain a living and living in a major city. But going without made me reassess my constant connectivity. Do I really need to be glancing at three screens simultaneously always? Is it so critical to perform four digital functions at once, hunched over antisocially in favor of eye contact?

Probably not. Cognizance about how overwhelmed I feel sometimes because of technology and, on the flip side, how free I felt spending prolonged time offline, was a gift. Even if my fellowship is ending and my traveling internationally will cut back to a more normal level, I’d like to at least stick with the technology mentality I had during it.