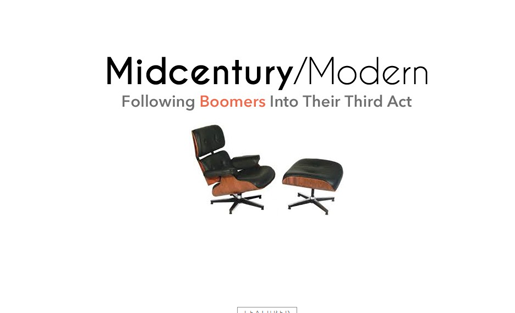 Midcentury/Modern is an online magazine “following Boomers into their Third Act.”

J-Lab has announced four winners of its Masters Mediapreneurs Initiative, a grant program that aims to help fund media startups developed by Baby Boomers, aged 50-plus. The winning projects range from an online magazine on Medium.com that covers Boomers to a Spanish-language initiative to document border-crossing deaths involving law enforcement. Each startup will receive $12,000 to bolster their efforts in developing a sustainable news venture.

The program, also known affectionately as the “Geezer Grants,” is meant to be a starting point for Baby Boomers who want to do new things in media, said J-Lab director Jan Schaffer.

“This will allow us to start up a truly innovative new program — daily hyperlocal newscasts that will live not only on our 24/7 streaming radio station, but also as podcasts posted to South King Media’s six local blogs and Facebook pages." -Scott Schaefer

“It’s part of the movement right now to build creative next acts for Baby Boomers who are not done yet,” Schaffer said about the program. “We’re at a crossroads, where that kind of civic knowledge meets a civic opportunity to model some new ways that they can participate in community life through the media — and through covering news and information that they already knew a lot about.”

Here’s what we know about the winners:

Midcentury/Modern, an online magazine “following Boomers into their Third Act,” launched in late December by hyperlocal news entrepreneur Debra Galant, the founder of Baristanet and now director of the NJ News Commons. Instead of creating a stand-alone website, the magazine is publishing on Medium, a social journalism blogging platform that allows people to recommend and share posts Twitter-like. It is one of the first publications receiving independent funding to launch on Medium, which is also offering technical and revenue support. “This online magazine explores how the definition of aging shifts when it happens to the cohort that defined itself by its youthfulness,” Galant told J-Lab.

The LP-FM New-Media Newsroom, a new FM/web-streamed radio station for New Haven, Conn., shepherded by New Haven Independent founder Paul Bass in partnership with La Voz Hispana, the local Spanish-language weekly. Daily four-hour news programs, to start, will be in English and Spanish and feature local African-American hosts. “We’re excited about launching an FM/web-streamed community radio station in the fall,” Bass told J-Lab. “We envision this as one model for not-for-profit, public-interest local news sites like ours to expand on the journalism we do and broaden our racial and ethnic makeup and outreach.”

SoKing Internet Radio, daily newcasts to feature content from South King Media company’s six community blogs covering South King County near Seattle. Scott Schaefer, founder of the B-Town Blog and South King Media, is leading the project. “This will allow us to start up a truly innovative new program — daily hyperlocal newscasts that will live not only on our 24/7 streaming radio station, but also as podcasts posted to South King Media’s six local blogs and Facebook pages,” Schaefer told J-Lab.

EncuentrosMortales.org, a Spanish-language website and database to collect public records and media reports of undocumented people killed during interactions with law enforcement officers along the southern border of the U.S. It is a project of D. Brian Burghart, who created an English version, FatalEncounters.org, and is editor and publisher of the Reno News & Review. “I’m very excited to be able to move forward with EncuentrosMortales.org. Law-enforcement-involved homicides along the U.S. border is an important and underreported issue, and I hope we can bring together technology, languages and volunteers to get a much better idea of our government’s activities,” he told J-Lab.