Advice from Vox’s Melissa Bell: Follow Your Curiosity to Success 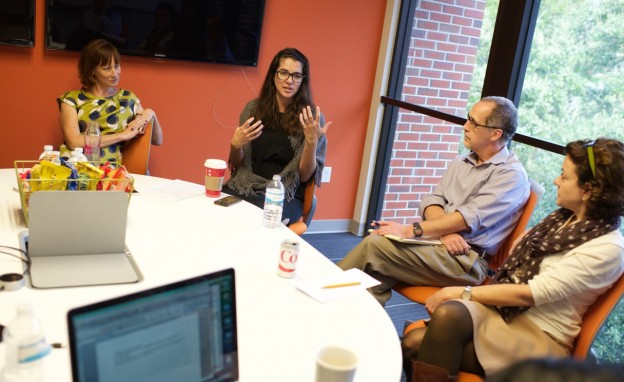 Melissa Bell, center, in a discussion at the University of Florida's College of Journalism and Communications. Bell visited the university as part of its inaugural Innovator Series, which focuses on media innovation and new ways of communicating. Photo by Steve Johnson.

The best advice Melissa Bell has for young reporters: Follow your curiosity lines.

During the Vox.com co-founder’s recent visit to the University of Florida’s College of Journalism and Communications as part of the college’s Innovators Series, Bell spoke with students who have grown up online, as she did.

“You don’t need to be a coder. But it’s great if you have some understanding of what that actually looks like and feels like in the background.” -Melissa Bell

“I think because I felt like the Internet was approachable and it was a place I was already curious about, it was easy to learn more about it,” Bell said.

Bell’s curiosity led her from a style column for the Washington Post to blogger to the Post’s director of platforms to eventually co-founding Vox.com with Post colleague Ezra Klein and fellow journalist Matt Yglesias..

“I was really one of the first people to grow up online, and to me the Internet was always sort of a play place,” Bell said. “I was able to see it as a place for entertainment and learning and not necessarily as something I had to study and figure out, so it was just natural.”

Bell and Klein’s Vox.com has achieved both financial and journalistic success in its nine short months. Launched on April 6, Vox.com was mentioned in the New York Times’ innovation report — dated March 24.

In the report, Vox’s online reader traffic is compared to that of publications with years of history like USA Today, BuzzFeed, the Huffington Post and the Wall Street Journal. The report refers to Vox Media as “creating newsrooms custom-built for digital.”

Bell attributes some of Vox.com’s quick success to hiring a team of digital natives. At 35, Bell is the oldest person on staff.

She said sometimes she views the success as more of a challenge.

“When we get something wrong it hurts, but that’ll make us better faster,” she told a group of 12 journalism students at a roundtable discussion.

Bell currently holds both editorial and technological titles at Vox Media. She is a senior project manager as well as Vox.com’s executive editor. The road to these innovative positions was paved with the bricks of traditional media.

“When they approached me to start a blog at the Post, I was really confused because that’s not a profession, that’s my spare time,” Bell said. “The blog was really just like my place to write jokes and entertain myself. I didn’t think of it as a profession.”

Bell said her blog, which was her first true endeavor in digital journalism, sprang from her editor’s interest in her own personal blog.

“You know, my boss asked me to start a blog because he followed my personal blog and my personal blog was nothing but just like me feeling sorry for myself after a bad breakup,” Bell said. “It had nothing to do with journalism whatsoever but because of that, you’re able to show the examples of what you do and I think that’s important.”

Melissa Bell, top right, in a discussion with UF’s College of Journalism and Communications faculty and students. Photo by Steve Johnson.

Learning to be Digitally Proficient

“The reason that I learned it was because I used it and that’s really at the basis of it,” Bell said of digital journalism. “I think it’s really important for us to use these different tools and to understand them.”

While working for the style section of the Post, Bell began meeting weekly with a few of her coworkers to discuss digital journalism. The first 30 minutes of the weekly meeting were allotted for gossip while the last 30 minutes were solely for discussing the evolving craft of journalism. From this “beta” group sprung Vox.com.

Bell said she believes sometimes journalists undervalue people’s curiosity and so when she and Klein founded Vox.com, they did so with one goal in mind: help their audience find order in the disorder.

“When I was learning to be a magazine writer, somebody said, ‘You should go to Barnes & Noble and just sit there and read all the magazines that they have on the stands,'” Bell said. “It’s the only way that you’re going to learn.”

She believes the same can apply to the digital journalism world, so she follows and encourages others to follow that same advice.

“Use every single news outlet online, think about what they’re doing, think about how they’re writing their stories and how they’re shaping their content,” Bell said. “That’s the best way to figure it out. It’s to be a consumer of the product.”

Bell encourages journalism students to participate in the online conversation.

“Do whatever you like to do online, but do something,” she said.

When speaking to students, Bell gave the example of a writer Vox.com recently hired to cover health care. German Lopez, she said, was hired because of the voice he had established on Twitter. Even as a recent journalism school graduate, Lopez cultivated an audience for his expertise on Obamacare. When that topic died down, Lopez followed one of his curiosity lines to medical marijuana and established himself as knowledgeable on that next topic.

Bell said resumes are an outdated means to assess a journalist’s experience and impact. “I think there are a lot better ways to see what people are doing.”

“You don’t need to be a coder,” she said. “But it’s great if you have some understanding of what that actually looks like and feels like in the background.”

Erica A. Hernandez is a senior at the University of Florida studying Journalism. A bilingual Miami native, she currently works as a web producer at the university’s NPR affiliate, wuft.org, and as a sports reporter at the Independent Florida Alligator.