Storyful’s Mark Little on the Future of Journalism and Education 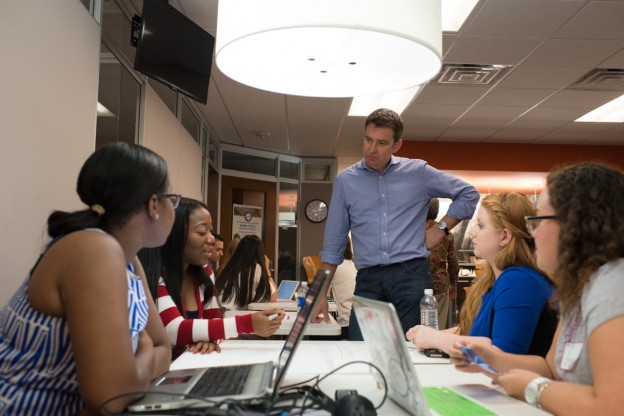 Storyful's Mark Little speaks with journalism students during his visit University of Florida on Sept. 18. Photo by Steve Johnson.

Mark Little has one wish for journalism students. In what he considers to be a golden age of journalism, he hopes the see the future journalists of the world go beyond just testing boundaries.

“It’d be nice to think that people here are going to set new boundaries and break them,” Little said during a recent visit to the University of Florida’s College of Journalism and Communications.

“We need to stop being the gatekeepers... and find ways to work with people that used to be our audience,” - Mark Little

The Storyful CEO and creator met with students and faculty during the college’s Innovators Series. During a roundtable session with about 15 students, he challenged them divide up into three groups and generate solutions to ethical dilemmas arising from user-generated content in news gathering, verification and objectivity — the same topics he and UF faculty members were working through earlier that day.

Journalism Education and the Golden Age of Storytelling

The Irish journalist noticed a clear difference in the two groups’ approaches.

“Going from discussing the issue to actually walking in to see some students turning the questions I had asked into a problem-solving exercise was really brilliant,” Little said. “And that’s not happening in other newsrooms.”

Little is a former foreign correspondent, television reporter and founder of Storyful — the world’s first social media news agency. Storyful was acquired by News Corp in 2013 and is working with Facebook to develop and power a Facebook Newswire. The basis of Little’s company is working with audience members to aggregate content for Storyful’s many media partners, which include YouTube, ABC News and the New York Times.

“We need to stop being the gatekeepers … and find ways to work with people that used to be our audience,” Little said during a moderated conversation at UF.

This way of thinking, Little believes, must be bolstered among current and future journalism students, for the sake of the craft.

“They have to understand more about the shift and disruption that’s happening in their business,” Little said. “I think they’ve got to be much more excited about the possibilities when other people are being very negative.”

“I would have come here expecting more pessimism, more cynicism or skepticism, but it’s the exact opposite,” Little said. “I’ve met innovators, and I’ve met people from a broad range of disciplines and they all have, I think, an unexpected optimism about the challenges ahead.”

As journalism students learn in communications classrooms across the country, the challenges are great. Graduating with a degree in journalism during a decade that has seen more layoffs and buyouts than any other can sometimes seem like a death sentence. Little and faculty members encourage students to keep the faith.

“I kind of get laughed at sometimes when I say this is a golden age of storytelling,” Little said. “All I’ve heard here is ‘Here, here. Let’s go for it, let’s do it.’ It’s such a great mentality compared to pessimism you get when you sometimes walk into a newspaper.”

A Student’s Perspective on Breaking Down Boundaries

Before Little’s visit, I wasn’t so sure about this being the “golden age of journalism.” And though I still have my doubts, I realize the possibilities are far greater than the limits. Yes, there are fewer and fewer traditional reporter jobs than ever before but why should that be a seen as a negative? The future of journalism isn’t a matter of reinventing the wheel, it’s a matter of reformatting the way content is gathered and distributed. It’s still the same accurate, fair and beautifully crafted story, but maybe a citizen journalist contributed to the initial report.

Last Wednesday evening I was sitting in a lecture when a member of the Gainesville community tweeted to WUFT News about an accident on a major road near UF’s campus. The student was reporting an accident that appeared to have left a person unconscious in the middle of the road. After a few phone calls, I confirmed it was a fatal car accident and made my way to the scene as quickly as possible.

This is a golden age in which reporter and reader lines are blurring, for the better. If the Twitter user wouldn’t have tagged WUFT News, an outlet she likely looks to for news often, I wouldn’t have sprung into action or even known about the crash until hours later.

Setting boundaries and breaking them is a concept I’ve learned to embrace during my four years at UF, and it’s a skill I plan to carry with me to any newsroom — traditional or not.

“If anything, I’d love to see people coming out of this school, and going out there and proving that point,” Little said. “That it is actually potentially a golden age, as opposed to just wanting to go into a newsroom and be a traditional reporter.”

Erica A. Hernandez is a senior at the University of Florida studying Journalism. A bilingual Miami native, she currently works with the university’s NPR affiliate, wuft.org, and as a sports reporter at the Independent Florida Alligator.