Live-Stream: Washington Post’s Marty Baron on the Future of News 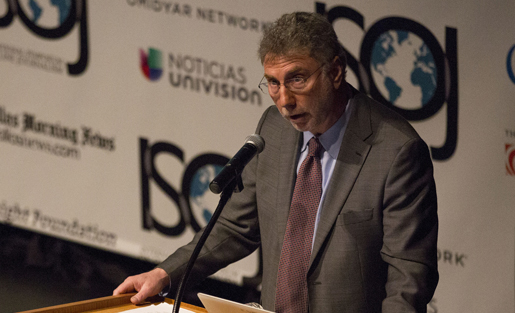 Marty Baron of the Washington Post addresses the ISOJ conference in April 2014. Photo by Bryan Winter/Knight Center via Creative Commons

The live-stream for this event is over. Here’s the archived video of the talk and Q&A:

The Hearst Distinguished Lecture Series is hosting Martin Baron, executive editor of the Washington Post, on the Biscayne Bay Campus at FIU. Baron will give a speech entitled, “Media, journalism and the future of news in the digital age.” You can watch the live-stream on this blog post.

Martin “Marty” Baron became executive editor of the Washington Post on Jan. 2, 2013. He oversees the Post’s print and digital news operations and a staff of about 650 journalists. In 2014, The Post won two Pulitzer Prizes, one in the category of public service for revelations of secret surveillance by the National Security Agency and the other for explanatory journalism about food stamps in America.

Previously, Baron had been editor of the Boston Globe. During his 11+ years there, the Globe won six Pulitzer Prizes for public service, explanatory journalism, national reporting and criticism. The Pulitzer Prize for Public Service was awarded to the Globe in 2003 for its investigation into a pattern of concealing clergy sex abuse in the Catholic Church.

Prior to the Globe, he had top editing positions at the New York Times, the Los Angeles Times and Miami Herald. Under his leadership, the Miami Herald won the Pulitzer Prize for Breaking News Coverage in 2001 for its coverage of the raid to recover Elián González, the Cuban boy at the center of a fierce immigration and custody dispute.

Born in 1954 and raised in Tampa, Florida, Baron speaks fluent Spanish. He graduated from Lehigh University in 1976 with both BA and MBA degrees.