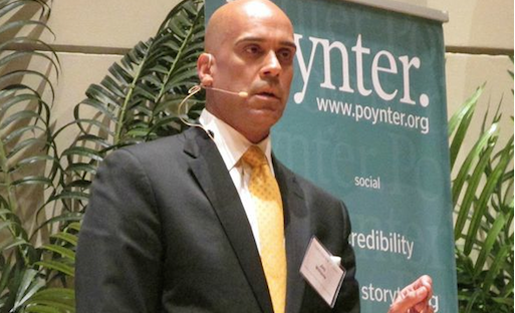 “Truth & Trust in the 21st Century,” a forum produced by PBS MediaShift and Poynter, brought together journalists and community members to discuss violence in Chicago, including Jim Williams from CBS 2, pictured here.

When it comes to covering crime, journalists walk a fine line. Reporters and community members alike must figure out how to tell stories, distribute content, inform citizens and address violence in what Poynter’s Kelly McBride considers a new media ecosystem with so many outlets and so many voices. How do you tell deeper stories with context and still get clicks and advertising to support the work?

“If there is no one paying 50 cents for that newspaper or going online to get it, then there is no us." - Lolly Bowean

The panelists were a mix of traditional and newer media, from outlets such as the Chicago Tribune, Chicago Sun-Times and DNAinfo Chicago, along with a community activist who produced her own media. Many publications represented are committed to covering crime in the city using various tools and techniques. Moderators Kelly McBride and CBS 2 anchor Jim Williams kicked off the evening by asking each panelist about his or her involvement in reporting on violence.

Tracy Swartz is the reporter behind RedEye Chicago’s Homicide Tracker, an interactive map that has documented every murder since 2007. When you can see a month or a year’s worth of murders all at once, “it tells a greater story,” Swartz said. Seven years later, the map is still updated with data from the Cook County Medical Examiner’s Office, the Chicago Police Department and the Chicago Breaking News Center.

Another panelist, Darryl Holliday of DNAinfo Chicago, shared his strategy: comics. The Illustrated Press uses art to tell stories, like the murder of 19-year-old Marissa Stingley. “How to survive a shooting” appeared in the Chicago Reader last year. Here’s a panel from that story:

At the Chicago Sun-Times, Michael Lansu is the editor of Homicide Watch, a site “dedicated to the proposition that murder is never a run-of-the-mill story.”

“It’s not just one story the day after it happened,” Lansu said. Instead, reporters focus on the full story, from the streets to the courtroom.

These methods of covering crime in Chicago are certainly in line with the direction of the media — mapping, illustrating, blogging. But aside from “the how,” the panel also talked about another issue: “the what.”

For Asiaha Butler, president of the Resident Association of Greater Englewood (R.A.G.E), there is too much emphasis on crime in neighborhoods like her own. A story about death and hardship in Englewood — like WBEZ’s two-part series about Harper High School — “doesn’t give me any hope,” said Butler. Butler produces her own public access show about her neighborhood and emphasized that more citizens need to tell their own stories.

Panelist and author Alex Kotlowitz felt differently about the Harper High series that he helped produce. He noted the importance of empathy in journalism. In the case of the WBEZ story, the reporters dug deep, spending five months at the school.

Empathy needs to be a central force in journalism. –Alex Kotlowitz #truthtrust

A 5th Grader Stands Up

Like Butler, audience member Rondayle Sanders also wants his community to be portrayed in a more positive light. Sanders is 12 years old, and he and his classmates recently published a powerful opinion piece in the Chicago Tribune. To the journalists reporting on their neighborhood, they wrote: “You spent less than 24 hours here, but you don’t really know us.”

Rondayle Sanders tells the audience about his neighborhood.

“I just wanted you to know more about brighter things,” said Sanders when he stood up and told the audience about his home.

South Shore fifth grader says media should cover the neighborhood. People do help each other and kids help their elders. #truthtrust

“You’ve got to play your role, too,” said panelist Lolly Bowean in response to the demand for different and more uplifting stories. The Chicago Tribune reporter reminded the crowd that media outlets are businesses.

“If there is no one paying 50 cents for that newspaper or going online to get it, then there is no us,” said Bowean.

Money matters, and if a publication wants to succeed, it must engage readers and get clicks. Moderator Kelly McBride agreed. “The cat video wins every single time,” she said.

Lack of public appetite for high-impact, quality reporting undermines the journalism so many ppl say they want #truthtrust

A Role for Citizen Journalists

In order for the media to tell a broader range of stories, the public has to get involved. However, these online and print publications will never be perfect; they will never please every citizen. This is where citizen journalism comes in: professional reporters aren’t the only ones who can share and tell.

When Rondayle Sanders asked the panel for career advice, Darryl Holliday said to “be relentless.” Chicagoans — both young and old — have to become a part of the narrative, and to do so, they might want to learn from the professional storytellers. And Butler told Rondayle to tell his own story if he can’t get the attention of traditional media.

“If you tell a good story, people will listen to it,” said McBride.