How Matter Leverages the Community to Help Entrepreneurs Think Bigger 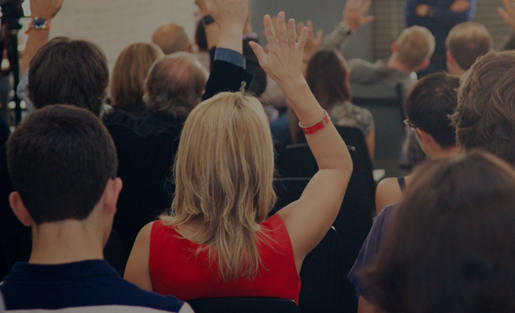 The Matter program kicks off with an intensive bootcamp aimed at building scalable media ventures.

I joined Matter, the startup accelerator backed by the Knight Foundation, PRX and KQED, in January of this year. At the time, it was 13 weeks into the 20-week program for Matter’s second cohort of media-related startups, “Matter Two.” With only five weeks to Demo Day, I got my feet wet right away and started planning Matter Two’s last design review.

“The success of Matter as a program and a community is that we are actually learning collectively in a way where we’re stronger than if we were alone.” -Colin Mutchler

This was my initial understanding of design reviews:

Now eight months into Matter and four months into Matter Three, I have much more experience with design reviews and the program as a whole. Part of that is simply due to time  — I got to embark on Matter Three’s journey from the beginning, and that means I have been able to see them through each sprint of the program. But more importantly, I’ve been able to participate in their growth. As a part of the Matter community, I have given active feedback at each point throughout the program, and not only watch, but also feel invested as the entrepreneurs build product, kill things and iterate.

the strength of the collective

Culture and community are the driving forces behind the Matter program. Every day, I see the entrepreneurs leveraging the internal community as well as the greater Matter community in different ways. These entrepreneurs are scrappy, intelligent, and despite not having much of it, they are generous with their time.

“The success of Matter as a program and a community is that we are actually learning collectively in a way where we’re stronger than if we were alone,” says Colin Mutchler, CEO and co-founder of Louder.

Alicia Rouault, CEO and co-founder of LocalData presenting at DR0.

But the Matter community isn’t just made up of the people who work in the space, and our culture doesn’t stop at our front door. Each week, there are at least five new people who come in to speak to or hold office hours with the entrepreneurs. They tell stories, communicate new and different perspectives, and give feedback.

Just last week, Matter Three had their last design review, DR3. Erin Richey, CXO and co-founder of Known, was excited to see that some of the people in the audience were familiar faces: mentors, speakers, past panelists or past audience members.

“They’ve given feedback in the past and now, three-quarters of the way through the program, it’s nice to see positive reactions to the changes we’ve incorporated based on that,” she said.

Deanna Brown, after holding office hours early on, came back to be a panelist at DR1, and continues to mentor many of the teams. She has been excited and engaged since the beginning, and has also been brutally honest. In a session between DR1 and DR2, Mutchler remembers Brown telling his team to focus because they were “all over the place.” After DR3, she high-fived him.

Ben Werdmuller, CEO and co-founder of Known, noted that some of the mentors who weren’t so keen on their venture at previous design reviews, were willing to help after seeing their progress – mentors like PBS MediaShift’s Mark Glaser, who recalls being “largely unimpressed with most of the ideas and unmoved by many presentations at the first design review.” He came in to hold office hours shortly after that to try and help them with their stories, and followed the teams’ progress over the next few weeks.

“I was really impressed with the arc of the ideas between DR0 and DR3, how the startups shifted their focus, pivoted and improved their presentations…They obviously evolved and grew over the past couple months, because the ideas were sharper, the presentations better and the business models evolved.”

Of course, the teams still have plenty to work on, and the Matter mindset lends itself to never being totally done. So it was only fitting that when I asked Jude Fulton, CEO and co-founder of Musey, about how she was feeling after DR3, she smiled and said, “You’ll never answer all the questions, but you want new ones every time. That means you’re making progress.”

Alongside the several Matter mentors and other community members who have had touch points with the entrepreneurs along their journey. I, too, feel a sense of fulfillment seeing my feedback incorporated into the ventures sprint after sprint, and especially at this last design review. The progress made between each design review and cumulatively is impressive, and it’s rewarding to feel like I’ve helped shape that upward trajectory.

So now that I have four more design reviews under my belt, I’ve added one more detail to my description of Design Reviews:

Lara graduated from Stanford University in 2011 with a B.A. in Human Biology, concentrating in International Health and Psychology. Lara loves the intersection of creativity, innovation, and social good. Prior to Matter, she worked 9-5 as a paralegal at Impact Fund, a public interest law firm specializing in class action litigation, and 5-9 as a freelance filmmaker/photographer. Follow her on Twitter: @LaraOrtizLuis