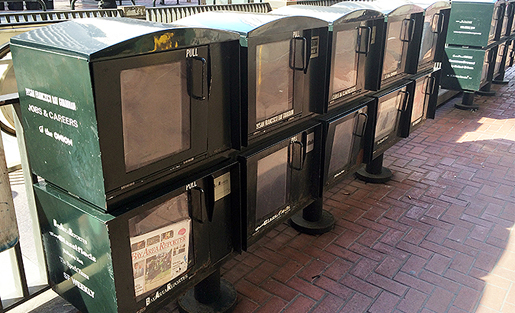 "There’s a place for Facebook, and there’s a place for Twitter … But when you really want to drill down and make sure that you’re getting reliable and accurate and honest information, that’s where traditional media really has to step up and play a bigger role."

“I love print. I am a print guy — a newspaper guy first and foremost,” Vogt told me recently. “I still read three papers every day.”

Recently, as part of my Knight Fellowship research into business models for local journalism, I sat down with Vogt to talk about his vision for local media in San Francisco, and innovating in a world where most publications are “swapping print dollars for digital dimes.” Below, I’ve distilled some of the highlights from our conversation.

Todd Vogt: I think the value and the strength and the power of the internet is its broad universality. The power and strength of newspapers — and I’ll use that term sort of generally — is how local they are. It’s been proven without exception that nobody can do what newspapers do on a local level, from a reporting standpoint … So my vision for these newspapers is to expand and enhance and improve that aspect of it, whether that’s dead trees and ink or on your smartphone or tablet.

Newspapers, because of our history and our position in society, still garner that respect as a trusted news source, and that’s something that we have to make sure we maintain. We’re trying to expand upon that. … People are already getting the story about the Malaysian Airlines plane from a million other sources better than us — but again, Board of Supervisors? Nobody does that better than us.

When you said that nobody can do what local newspapers can do, you alluded to a broad definition of “newspaper.”

So there could be an online newspaper, by that definition.

Yeah. I don’t think it has to be dead trees and ink.

I think there’s a place for Facebook, and there’s a place for Twitter … But when you really want to drill down and make sure that you’re getting reliable and accurate and honest information, that’s where traditional media really has to step up and play a bigger role.

What about this idea that “local doesn’t scale” — OK, you just rolled your eyes.

We’re local media. We don’t need to scale nationally or internationally; we just don’t need to. We’re local, and that’s the value of — it’s a benefit. It’s a strategic plus for us … If I was the CEO of Yahoo, if i was Marissa Mayer, I would be watching closely what other billionaires are doing right now. They’re not buying TV stations; they’re not buying radio stations; they’re buying newspapers. The content that we produce is invaluable.

What keeps you up at night?

My kids. … From a business standpoint? Digital.

It’s changing so fast, and it’s so irrational.

What’s irrational about it?

I love Eater, I love Curbed — but see to me those are totally different. [With] those niche websites, at least you sort of know the audience that you’re talking to. Those other ones, the billion-plus guys, I don’t know who [advertisers] think they’re talking to. I just think they’re so enamored with the number — you know, a billion users — that they buy into it.

So that’s what keeps me up at night. You know, I used to stay up at night fretting about why anybody would ever advertise on terrestrial radio. I didn’t get it. And then a handful of years ago, I stayed up at night thinking, ‘Why in the hell would anybody advertise on TV anymore?’ I’m biased, of course, because I have lots of people saying nobody reads newspapers anymore. I have people saying, ‘Why would anybody advertise in newspapers?’

But the digital one is just the flavor of the month. I always joke about Facebook: the next thing that catches 15-year-old girls’ attention will be the Facebook killer. But they just keep growing and getting bigger and stronger … $19 billion for WhatsApp? There’s something wrong with business today. Valuations are out of whack; values are out of whack. I don’t know what it’s going to take for things to get refocused.

This post was originally published on the website of the John S. Knight Journalism Fellowships at Stanford University. The Knight Fellowships fosters journalistic innovation, entrepreneurship and leadership. Each year, 20 individuals from around the world get the resources to pursue their ideas for improving journalism.