Finding Gold: Inside the J-School Hackathon 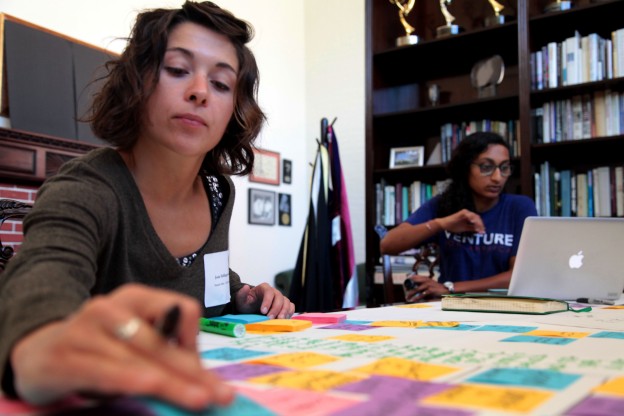 "In truth, it’s a mental sport of navigating through a swamp of ideas, trying to look for a piece of gold, struggling to share a consensus on what the gold looks like, and then trying to swim to the end line in one piece."

That was the first question that surfaced in my mind once the frenzy of the Hackathon began. We had three strangers as group mates, two advisers, one challenge and limitless large post-it notes to generate a master plan that could surprise and impress.

Did I also mention that we only had 13 hours to do so?

The journalism hackathon co-produced by PBS MediaShift and the University of North Carolina’s School of Journalism and Mass Communication brought students from different schools together to innovate and generate solutions for local media outlets’ problems. That, however, is just the official description of the event. In truth, it’s a mental sport of navigating through a swamp of ideas, trying to look for a piece of gold, struggling to share a consensus on what the gold looks like, and then trying to swim to the end line in one piece.

Mind you, it was not an easy swim.

My group had the challenge of figuring out a way of using high school sports to tighten bonds within the community. I had plenty of ideas lingering in my mind, and I’m sure others had some too, but how should we express these half-formed thoughts to these people we’ve never met before without sounding silly or overpowering?

We started out by brainstorming on groups who are involved in the high school sports scene, reasons people attend high school sports, and then we hit our first wall. What should we think about next? How should we begin brainstorming about solutions? Some of us thought that it was too early to do so, but some of us thought that the time was ripe. We couldn’t agree on what to do next without being rude.

Silence. Blank stares. We were too polite to tell each other what we really thought, so we were holding back and filtering our words. Finally, a member suggested we take the conventional route — generate an app. Immediately, a light went on and ideas were pouring out. It was a safe idea, one that could generate so much potential. The posters were filled with features that we wanted to add and pure excitement over the fact that we could combine so many solutions within an app. But after an hour or so, someone piped up and voiced a concern lingering in the back of our minds.

The air became stagnant as all the ideas surrounding the app lost their glow. We didn’t have much time left in the day, so wouldn’t it be too risky to pursue a new idea?
What is an entrepreneur but someone who dares to take risks? This was something we all agreed on. So we decided to take a step back and head in a totally different direction.

We tore off a new sheet of poster paper and began brainstorming “radical” ideas. The tense and serious atmosphere dissipated, replaced by the sparkle of creativity as we gave suggestions — some ridiculous and some surprisingly feasible. There were drones, betting on games, faculty sports days and even virtual money trading. The democratic practice of voting narrowed our options down to three of the best ideas, and eventually to one. We found our gold!

The momentum gained pace from then on. We interviewed random people on the streets, crunched numbers, drew up documentation and finally collapsed out of exhaustion on top of our notes. We took a moment to appreciate how far we’d gone from our initial mind-block to where we were now.

How did we even get here?

The next day was a whirlwind. Aware of the limited time left, we refined our ideas, crafted a pitch and panicked as we encountered many detailed problems. Stress began to build up, and the initial politeness that made us hold our tongues gradually dissolved. We became frank with our disagreements, openly asking the other to stop talking and listen.

We were pumped up, we were ready, and before we knew it, we were up there, in front of a panel of judges, pitching our ideas and receiving questions. I ended the pitch with our cheesy tagline “Putting everyone on the team,” nearly tripping over myself in nervousness.

We were greeted by nodding heads and smiling faces from the judges, along with questions that we already anticipated. Our adviser tried hard to keep our spirits up, much like a high-school coach would.

“We’re going to nationals, people!” he said with his fist pumping the air. We cheered on with high-fives to each other. I didn’t care if we won. I had so much fun working with my group and that was reward enough.

In the end, we did not go to “nationals.” But we did get first-runner-up and an honorable mention that our product was desirable and viable. Support Our Sports, which was our idea of an initiative to use social media platforms to pose weekly challenges to various schools for them to win press coverage and monetary awards, found recognition.

Working with people is not easy. The initial hours of interaction are always rough as everyone treads around each other, trying to figure out what role to play. But as we try to evade or confront conflicts, the true colors show.

We had the idea generator, the one who seems to never run out of creative solutions; we had the manager, the one who would brainstorm on the best framework to begin organizing our ideas and document them; we had the devil’s advocate, always ready to pick up on the errors that we tend to ignore; and we had the talker, who was the youngest in our group. He was always ready to offer his opinions and his positive energy was infectious.

We got to know each other better and learned the best way to cooperate. That, to me, is the greatest takeaway from the journalism hackathon.
It’s learning how to sift through muck to find the gold together.

> Finding Friends Among the Competition at the J-School Hackathon, by Georgia Ditmore

Zhai Yun Tan (Nat) is a student intern in Reese News Lab, an experimental media and research project based at the School of Journalism and Mass Communication at the University of North Carolina at Chapel Hill. She is junior with a major in journalism and minor in environmental studies. As a transfer student from Malaysia, Nat enjoys observing American culture and eating Southern food. Find her on Twitter @Zhainatyun.