Learning When “Intern” and “Advocate” Collide 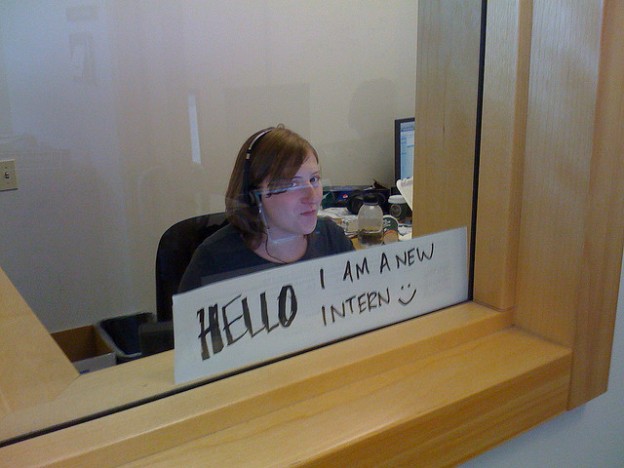 In October 2011, Caitlin Curran was fired from her part-time position as a freelance web producer at WNYC Radio and Public Radio International. The reason, she explains in an article on Gawker, related to her participation in an Occupy Wall Street protest, at which this photograph was taken:

"There’s a line between a student-intern and an employee. She’s there to learn, and this was a learning opportunity.” - Dr. Mike Ingram

The photo was posted by Boing Boing as the site’s Occupy Wall Street sign of the day, and to date has enjoyed some social media activity – 514 shares on Facebook, 501 tweets and 98 retweets, according to sharedcount.com. Curran wrote in the Gawker article that two days later she was fired by her general manager who was “inconsolably angry, and [who] said that I had violated every ethic of journalism, and that this should be a ‘teaching moment’ for me in my career as a journalist.”

In February 2014, Whitworth University journalism major Gabrielle Perez also attended a rally and was prominently featured in a photo that appeared in local and social media:

Perez was involved in a grassroots effort to urge a downtown Spokane, Washington, bar to change the name of one of its signature drinks: “Date Grape Kool-Aid.” The group, Boycott Spokane Downtown Daiquiri Factory, organized a series of rallies in the vicinity of the bar to exert public pressure, as well as raise awareness of sexual assault. It was at one of those events – on February 8, 2014 – that she and her sign were photographed.

Unlike Curran, Perez’s photo didn’t make a sizable social media splash – it was featured in a campus newspaper story about the protest and liked 84 times on Facebook. Like Curran, however, Perez was also a part-time staffer at a broadcast station – but as an intern.

Would their outcomes be the same?

Intern: Shelve your “other” life

Perez could have – and perhaps should have – been concerned for her continued internship, given her public advocacy. It wouldn’t be the first time an intern lost an opportunity over an unrelated expression of opinion. In a 2012 piece for the Columbia Journalism Review, Kathleen Culver wrote of a University of Wisconsin-Madison student who had a summer newspaper internship offer rescinded because the editors learned the student had signed a recall petition against Governor Scott Walker. (Disclosure: Culver is education curator for PBS MediaShift and worked with the author at UW-Madison.)

Culver noted in the CJR article that the student had signed the petition months before she had applied for the internship, which was created to support the state government desk. “She lost an ideal career opportunity after the retroactive imposition of an ethics code on a job that hadn’t been created when she chose to put her name on a petition,” Culver wrote.

This guidance reflects the Society of Professional Journalists’ approach – in its widely cited ethics code, SPJ recommends professional journalists “remain free of associations and activities that may compromise integrity or damage credibility” and “shun secondary employment, political involvement, public office and service in community organizations if they compromise journalistic integrity.” SPJ is currently revising its code, but these remain in the first draft of revisions posted to the organization’s website.

Internships are created to prepare students for the professional world, so interns are generally held to the same ethical standards. The Wisconsin student lost her opportunity to report for a major daily newspaper because she had engaged in an activity that could have been seen as compromising her integrity or damaging her credibility. It could be reasonably argued that Perez’s integrity was similarly compromised, should she be assigned a story related to either sexual assault or to issues involving downtown businesses, and that her advocacy was enough cause for dismissal.

The rest of the story

“I was definitely afraid that I’d get reprimanded, or told to stop,” Perez told me in an interview. While she became involved with the boycott group before starting her internship, her more visible advocacy, including the photo, as well as participating in a public meeting with city officials, came after.

“But for me, it was personal. I’ve talked to women who have been threatened or assaulted, and they tell me they don’t feel like they have a voice or can speak out.”

Perez said she was concerned that people might think she was acting on behalf of her internship site, especially when the owner of the bar began calling her out by name on Facebook and claiming she was “spinning news” for the broadcast station.

Then her internship supervisor called her in for a meeting.

“He told me not to worry about it,” Perez said. “He suggested that I lock my social media down – suggested, didn’t tell me to do it – and that I might consider removing some of my affiliations. But again, he didn’t tell me that I had to.”

Perez’s academic internship supervisor, Whitworth Communication Studies professor Michael Ingram, told me in an interview that the situation played out as it should.

“Of course, she shouldn’t cover that story in her role as an intern,” Ingram said. “But there’s a line between a student-intern and an employee. She’s there to learn, and this was a learning opportunity.”

Ingram said he had not explicitly incorporated a scenario like Perez’s into his internship class, but the situation has given him ideas on how to address the question of representation.

“For some interns, they will always be representing their employer or on the clock,” he said. “This is a good time to learn how to recognize that situation and work within it.”

Supporting the goal of internship: Develop the whole communicator

While four out of five students attend a college or university in their home state or a neighboring state, an ACT report suggests that students choose colleges a median distance of 51 miles from their home. This means students temporarily relocate to a new community with its own ongoing issues, challenges and needs.

“I like to see students plug in,” Ingram noted. “We want to encourage them to become a part of the community, to use their skills and care about the place they live.”

For journalism and communication students, who acquire a range of skills that can be an immense asset to grassroots and nonprofit organizations, telling them that they may end up dooming their internship chances by engaging in community activism only further separates the student from his or her four-year home.

Certainly student interns need to act responsibly, to carry themselves professionally and to apply the highest ethical code to the work they do. But there is a reason we call them “interns” and not “part-time employees.” Their work is intended to be a learning experience in the unique learning lab that is a professional environment. Within that learning experience come situations like Perez’s – ones from which she can grow as a communicator by discussing the situation, navigating appropriate responses and yes, accepting the consequences of what she chooses to do once that knowledge is attained.

There is a great deal of debate going on about internships – should they pay, are they a labor violation, does pay affect quality of experience. But in all this conversation, we cannot lose sight of the reason they were created in the first place: to allow the rising group of communicators to experience a professional environment, learn from people who engage with these challenges every day and develop as the skills and judgment expected in the field. If we take away their opportunities to learn when potential clashes arise, we undo the reason interns are in their positions in the first place.