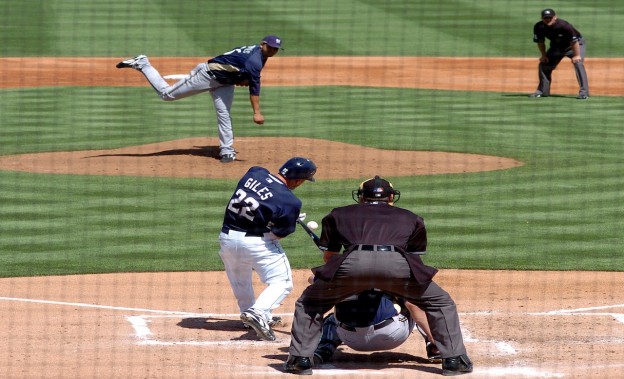 The clubhouse was a time machine that took him back nearly 22 years. Todd Rosiak, a beat writer for the Milwaukee Journal Sentinel, remembers when he began his journalism career. He covered high school baseball for the then Milwaukee Journal in his junior year of college. But sharing a major league clubhouse with college kids at this point in his career made him jealous.

“What you guys were doing did remind me of what I was doing,” Rosiak said, reminiscing about the early stages of his career. “But to be able to come into a major league clubhouse, talk to guys everyday like that and go to games … it’s awesome.”

But, this is why I love journalism. You build connections with other people and tell their most prized stories.

Dean Chris Callahan proposed the spring training program in 2010. Callahan first asked professor Greg Boeck to see if it was possible. The former USA Today writer made some phone calls. It was.

Seven students from about 30 applicants were enrolled into the pilot program that year. The following years doubled both those who applied and those accepted into the program.

“You have to grow or get out,” said Boeck, who emphasizes the competitiveness of getting into the program. “We’re lucky because we do get the opportunity to handpick students. You can tell who’s ready and who’s not.”

Boeck said the program is meant to catapult student journalists into a professional setting to grow, and the students he picks usually acclimate well. This is why Rosiak is jealous when he thinks back to his days covering high school baseball.

“I was terrible …” Rosiak said, pausing for a second. “I was terrible when I was your guys’ age. But if there’s anything I learned working with you guys, it’s there’s not enough hours in the day to work. It’s all about grinding.”

Rosiak and Boeck helped us while we were grinding away two to three days a week. Rosiak said unlike past years, he was able to connect with us on a personal level. I wish the feeling was mutual. I had trouble connecting with him at first. Strike one: he was wearing a University of Arizona shirt.

“And you didn’t beat me up for wearing my U of A shirt which I appreciated,” said Rosiak, chuckling. “Well I told you I bought an ASU T-shirt. I’m representing both sides. Give me a little bit of credit.”

Rosiak saw himself in students like me who entered the clubhouse. He has stayed in journalism because he loves reporting and interacting with players. We wasted no time connecting with the players.

I panicked one day when my story idea fell through. From the outside I was calm, but inside I was scared of striking out early. But then a new story came alive as I listened in the clubhouse. The diverse players spoke different languages (mainly English and Spanish), so I began to report about how the Dominican players bridge language gaps to forge a tight-knit team.

I needed one more source. I turned to Rosiak, who smiled and pointed to a Dominican player – his jaw packed with chew and a mean look on his face. I nonchalantly asked the player how he communicates with other players who only speak English. He responded: “Don’t speak English.” He broke eye contact quickly.

I grabbed a chair from the neighboring locker and persisted. To his apparent surprise, I sat down and started the interview, telling him I would ask him questions he’d understand. I only got one usable quote from the player, but Rosiak still approached me afterward to say I’d gotten further than others who tried to land that interview.

“You should take the day off after that,” he said.

Rosiak said he did not set me up for failure but suggested the stubborn player as a chance to grow as a reporter. He learned by being thrown into the fire.

“Sometimes you got to bite the bullet and talk to people who you don’t want to talk to,” he said. “It was trial by fire, I guess. You got to be able to shift gears and think on the fly, and sometimes there’s a deeper story.”

This became a trend: I would interview someone because an initial story idea fell through. And then I’d wait for some of my ideas to blossom.

I planted one seed the first week when I timidly approached outfielder Logan Schafer for an interview. I interviewed him about his number change and asked for a follow-up about the Whiffle Ball stadium he made in his backyard as a kid.

I waited four weeks. The day I was able to sit down with him for half-an-hour – players were normally available for 10 minutes tops – was the day I received contacts for his family. That 30-minute interview led to two hours’ worth of recordings from his dad and brothers. Had I packed that interview into the first day, I don’t think I would have gotten the same thorough coverage.

But this is why I love journalism. You build connections with other people and tell their most prized stories. And there’s instant gratification: I proudly smiled upon posting the article, and the next time I saw Schafer, he shook my hand and thanked me for bringing back his childhood.

Brendan Capria is a senior at ASU’s Walter Cronkite School of Journalism and Mass Communication. He enjoys the reporting process and being a storyteller, and looks forward to a career in sports journalism. (@BrendanCapria)