Are You Against Gender Discrimination in Tech? You May Be a Spartaca 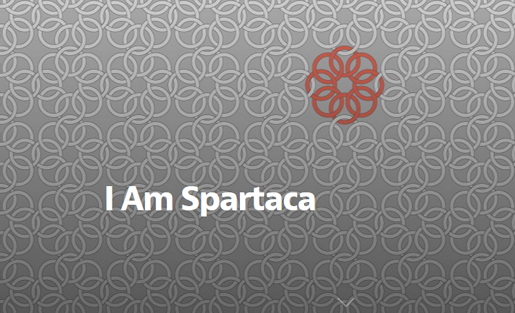 The Spartaca badge campaign focuses on those who have felt unable to speak up about gender discrimination in tech.

A few years ago, a close friend (not at MIT) asked for my advice. Work colleagues had been sexually harassed, and this friend didn’t know what to do: The offender was prominent, respected, and considered indispensable by his organization. This friend took the courageous move of reporting the issue, starting a process that was emotionally difficult and risky for this friend’s career. I was glad that this friend reached out to me. Although I mostly just listened, no one should have to be alone in their courageous acts for justice.

Have you faced gender-based workplace harassment in the technology industry? Have you taken the risk of speaking out against that harassment, or have you instituted policies and practices in your organization that protect people against gender discrimination? Have you felt too afraid to say or do anything? Are you committed to supporting people who have experienced these risks? In all these cases, you may be a Spartaca.

"If we’re going to support Positive Space-making on the Web, perhaps we need something like the Open Badges initiative instead of profile images, which can’t stay green forever."

Recently, a pseudonymous collective published an article on TheLi.st’s Medium channel, launching a badge campaign focused on those who have felt unable to speak up about gender discrimination in tech.

And though we still can’t tell you what happened—because we can’t prove anything, and we can’t name names—we’re going to tell you that it did happen.

We wear this badge to say so, and to let every woman in tech know that she’s not alone.

We’ve seen profile image memes before, with hundreds of thousands of Twitter users changing their profiles Green in solidarity with Iranian protesters, and with the HRC equality meme of last year (see Elena Agapie’s archive of equality meme images and the Facebook Data Science team’s own analysis). Molly Sauter, Matt Stempeck, and I also wrote a piece about the theories of change included in the equality meme campaign. Spartaca, however, seems different, closer to two much older solidarity memes: LGBTQ Positive Space Campaigns symbolized by the triangle rainbow sticker and the (ancient) Christian Ichthys.

A Positive Space symbol, unlike Facebook and Twitter profile memes, includes commitments and a promise, well beyond an attitude of solidarity. It represents a commitment to listen, to be informed about support resources available to those who speak with you, and to accept that you don’t have all the answers. The sticker is a promise by those who have the power to be visible about a risky issue to support those who can’t take that risk. The sticker can also refer to spaces, not just individuals, where people will be welcomed and invited to speak about issues that are risky to voice publicly. The commitments associated with positive spaces are serious enough that there are many learning kits to help people take on the responsibilities associated with creating positive spaces. (Can anyone suggest some of the best? The one I know is GLSEN’s Safe Space Kit.)

Positive Space works well in contexts where at least some people are willing to risk posting a visible symbol whose meaning is universally recognized. In systems of total oppression, groups can’t afford to make these symbols public. From the Christian Icythus to 20th century adaptations of Antigone (Anouilh in Vichy France, Fugard/Ntshoni/Kani in apartheid South Africa), these covert presentations of solidarity and support are what communications scholars call grounding, relying on shared knowledge or perspectives that are less visible to power.

Since the risks faced by non-males in tech vary by team/company and can include sexual assault (trigger warning), “I am Spartaca” uses will likely range from casual solidarity, listening, to substantial support. It may include people who are making an appeal for support and those who have gone through experiences they can only describe in private.

Can Spartaca Change Women’s Experiences in Tech, or is it Meaningless Clicktivism?

Whether it actually makes a difference depends less on whether it becomes a widespread movement and more on the ability of those who sign up to offer meaningful support. In its first week as a website/logo with no clear institutional ties, that potential is not yet clear. The language of the site also offers less clarity about whether allies are welcome, although I have been told via email that we are.

If Spartaca turns into just another profile image campaign, I don’t think it will have the impact its creators desire. I hope they’re able to create impact by channeling participants to learning, training, peer support, and a great network of organizations that support all marginalized people (not just women tech workers).

If we’re going to support Positive Space-making on the Web, perhaps we need something like the Open Badges initiative instead of profile images, which can’t stay green forever. Unlike the equality meme, these badges are awarded upon the successful completion of trainings and other substantial learning activities. If organizations that offer training in positive space-making offered Open Badges, we could easily make software that inserted those badges into the top banner space of our various social networks — and kept those badges in place even after we change banner images. That would make this campaign, and others, much more than a passing meme. At the same time, I think it’s also important to offer a low-barrier option for people to show solidarity. As the first step in a longer journey toward education and support, the Spartaca image is a fantastic idea.

Am I a Spartaca? I’m still figuring out how to make a meaningful commitment. This summer, I do promise to find and take positive space training, which I haven’t yet done. This summer, my fiancée and I have been planning to start prototyping a series of dinners where we attempt to create space for conversations that people feel are too risky to raise in public. If you know people who are good at this kind of facilitation and who can help us out, please get in touch.