Watch and Learn: What’s So Good About U.S. Media Startups? 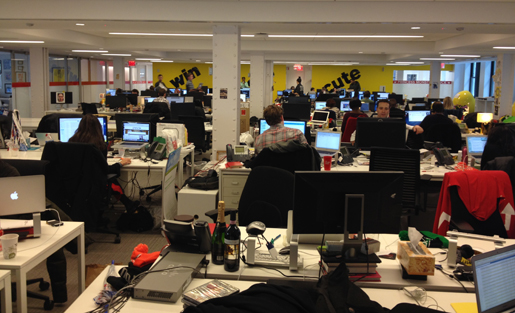 The BuzzFeed office in New York. Photo by Christian Fahrenbach.

We’re halfway through our Tow-Knight program in Entrepreneurial Journalism in New York. Within the last two months, we argued with people from Kickstarter and Contently about who exactly is going to finance journalism in the future. Brandon Diamond showed us innovations in the huge Huffington Post Lab, and Julia Reischel explained to us her ideas for her local blog Watershed Post. The giants from Facebook tried to sell us as hard on their marketing qualities for journalism as did the paywall-for-everybody-pioneers from TinyPass.

In addition to the work on our own project and the lectures at City University, these company visits are a core segment of our program. There are three aspects we talk about a lot in many of our presentations and debates — all of them remarkably different in my German home market.

1. Journalism as a service

Our professor/director Jeff Jarvis is a strong advocate of the following hypothesis: “Journalism” describes more than just being the fourth estate, more than shedding light on underappreciated topics. Instead, journalism can be “a service, enabling the user to live a better life.”

But what does that exactly mean, “better?” “Informed faster” as is the case with the well-curated newsbits of cir.ca? Or a BuzzFeed-like “more entertained?” Probably.

There are also sites that offer even more services for a specific target group, like the Facebook page “Jersey Shore Hurricane News,” which was put up after Hurricane Sandy. To this day, people affected by the catastrophe can find useful news about how to deal with its consequences. Should somebody who only looks through the comments on a site like this and who curates the postings be called a journalist? I tend to say yes.

But this is a phenomenon that in many ways has been limited to the U.S. The German media environment can learn from this and should adapt a broader conception and definition of journalism.

Vox.com and FiveThirtyEight.com try to fulfill this service-oriented promise of journalism. They also point to another phenomena: New journalism ventures in the US nowadays rely heavily on well-established personality brands. There are several more examples, apart from ex-WaPo columnist Ezra Klein (Vox) and 2012 election-hero Nate Silver (FiveThirtyEight), which David Carr sums up here.

This kind of persona-cult does not seem to work in Germany, because people hardly remember projects like Zoomr, a news-website marketed by aging news-anchor Ulrich Wickert. And TV-personality Cherno Jobatey’s efforts at the German version of the Huffington Post were reviewed rather patronizingly and critically.

From my understanding, journalism in Germany is seen more as a joint project of a team — and that there are less journalism-personalities in general who could monetize their popularity at new places.

I don’t want to know the number of German editorial offices where managers still think that unique users and a good Google Ranking count as the holy grails of online journalism. Or do management boards nowadays at least value followers and shares as acceptable metrics?

Here again, the US debate seems much more elaborate to me. The key take-away of this Contently article, for example: Sharing does not at all mean that the sharer actually read the piece. So why not put the share button at the end of article, therefore guaranteeing that the sharer at least scrolled all the way down? Why not count the number of shared quotes, thereby getting an idea if the reader actually thought about the content?

The tools to support all these debates are being brought into the market by small companies. One example: Startup Beatroot.co tries to add a new angle to traditional metrics by looking at offline events and speakers and therefore measuring something like the “real world” impact of articles. Currently in beta, the website shows a dashboard with clicks, shares and offline impact, thereby allowing a quick overview of the effects caused by a piece.

Admittedly, one can argue about all these aspects and their true maturity in both markets, the German and the U.S. one alike. Do we really need a more modern understanding of journalism, a star cult-like attribution of journalism’s products or elaborate new metrics? Maybe not.

But a debate about these things surely seems more productive then the 27th feature asking, “Is BuzzFeed a part of journalism’s apocalypse?” or the millionth panel about opportunities and problems of a paywall introduction. Maybe these questions and observations can lead to fruitful answers and new projects.

This post originally appeared in German in carta.info and has been translated into English by the author for the version that appears here.